Encouraging Signs in the August Data 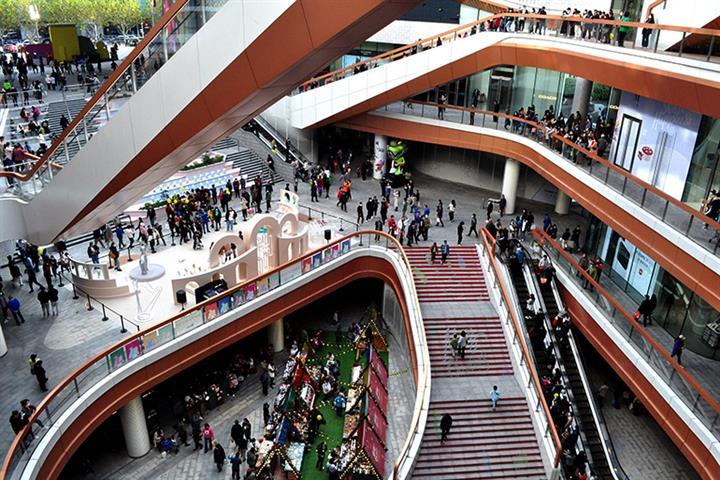 Encouraging Signs in the August Data

(Yicai Global) Sept. 22 -- The August data recently released by China’s National Bureau of Statistics (NBS) were a welcome relief. Our monthly GDP indicator suggests that the economy grew by close to 3 percent year-over-year last month, about a percentage point higher than our estimate for growth in July (Figure 1). The July data had shown an unexpected deceleration from June. They hinted that the recovery from the second quarter’s Covid-induced weakness was failing to take hold.

Clearly, 3 percent growth is much slower than the 5 to 6 percent at which the Chinese economy was expected to grow before the pandemic hit. Still, the August numbers show encouraging signs that the economy is, indeed, healing. 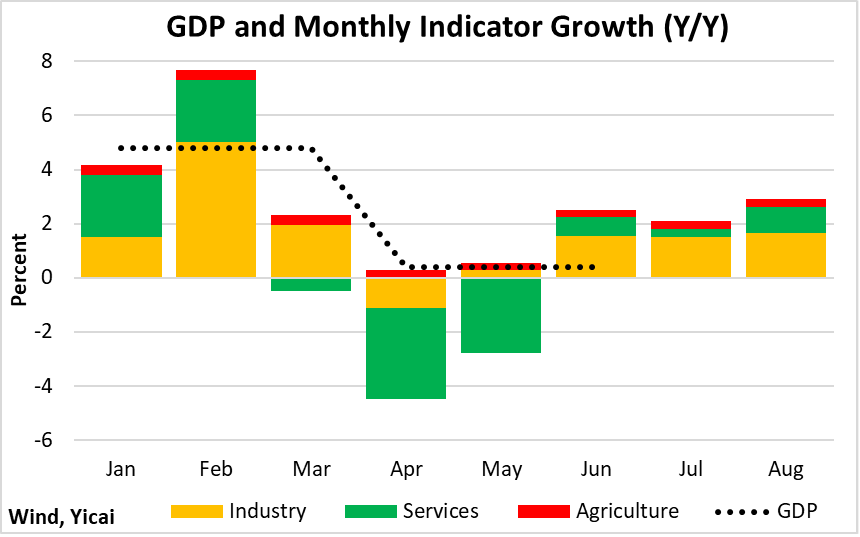 Despite Covid outbreaks in various Chinese cities, soaring temperatures and record droughts, there was a surprising recovery in retail sales. The Chief Economists surveyed by the Yicai Research Institute expected retail sale growth to accelerate from 2.7 percent in July to 3.8 percent in August. Retail sales actually grew by 5.4 percent.

The pandemic has particularly dampened retail activity in sectors where there is a high degree of human contact. However, it seems like Chinese diners are increasingly craving a good restaurant meal and are more sanguine about the risk of infection. In August, catering sales were up 8.4 percent year-over-year, a marked improvement from the -1.5 percent recorded in July. Indeed, consumers’ appetite for dining out has rebounded much more quickly this year than during the Covid outbreak in 2020 (Figure 2). 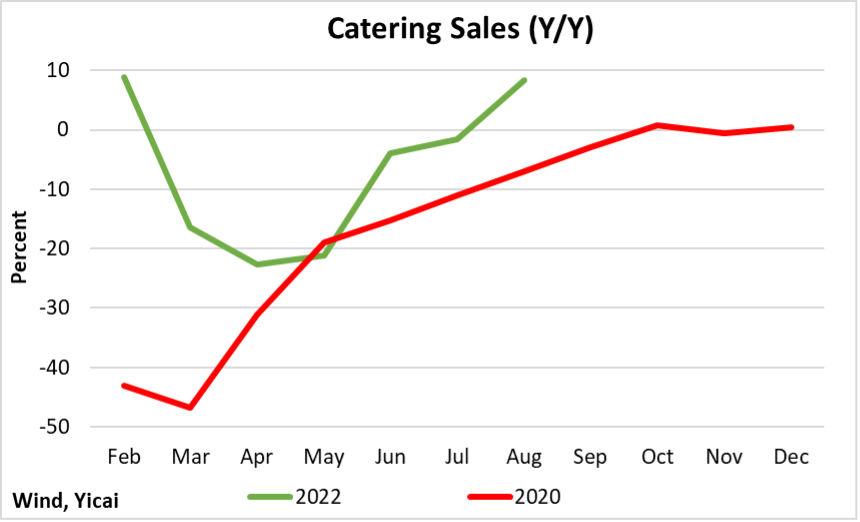 Similarly, retail sales of goods grew at 5.1 percent in August, four months after having hit their April low point. In 2020, 5 percent growth was only reached nine months after retail sales troughed in February (Figure 3). 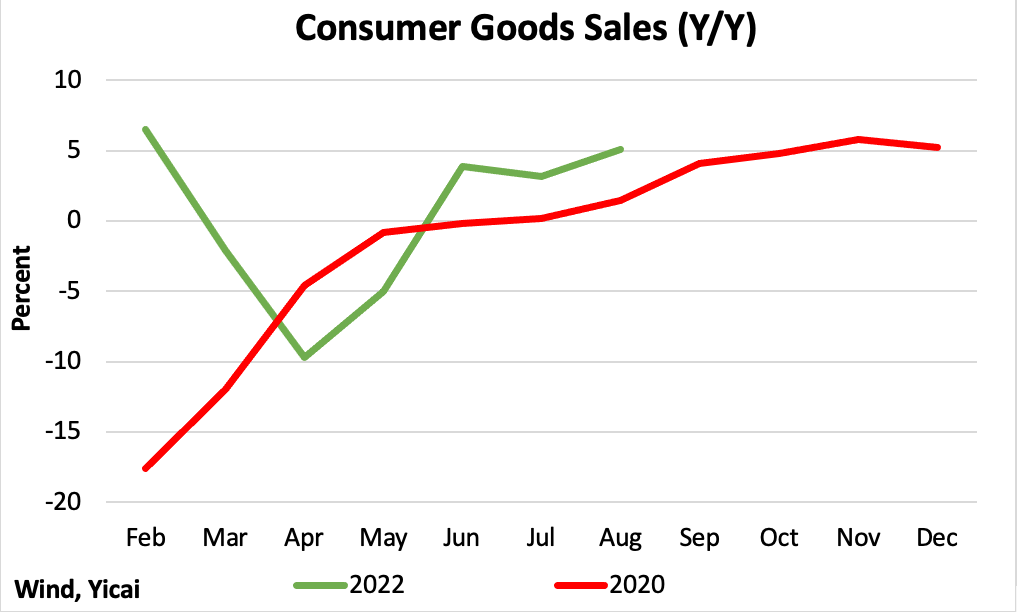 Sales of passenger cars continue to be particularly strong (Figure 4). Growth in August was 37 percent year-over-year. This follows 40 percent growth in June and July.

It first appeared that strong car sales may have simply been payback from weakness in March and April. But with cumulative sales over the first eight months of the year up 12 percent from the same period in 2021, it looks like Chinese drivers are increasingly keen to hit the road In new cars. 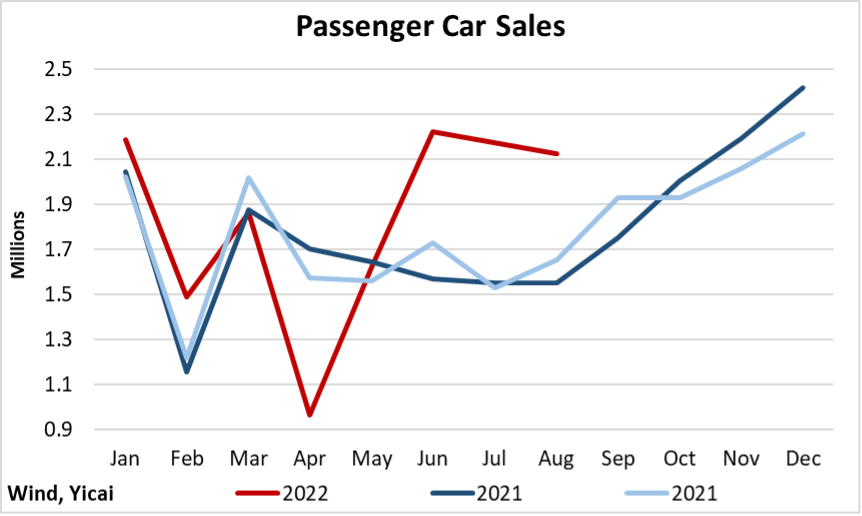 The strong demand for new energy passenger cars is all the more remarkable when one considers that the government has been reducing its subsidies for the production of these vehicles. While economists debate what sorts of government programs are needed to support consumption, the experience of the new energy passenger car market shows that Chinese consumers are eager to buy if they are presented with a superior product. 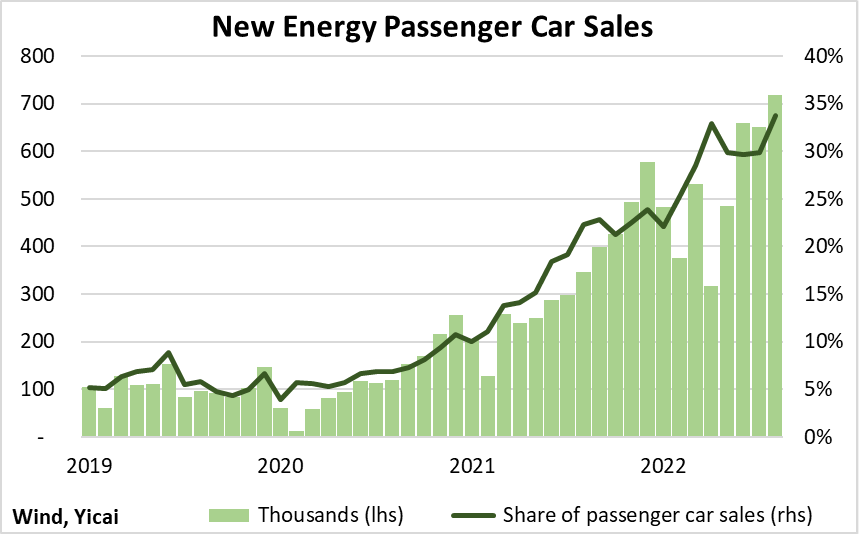 The rebound of consumption has also been underpinned by a relatively rapid stabilization of the labour market. The unemployment rate peaked at 6.2 percent during the 2020 outbreak and it took eight months for it to fall to 5.3 percent. This year, the unemployment rate fell to 5.3 percent in August, only four months after having peaked at 6.1 percent in April (Figure 6). 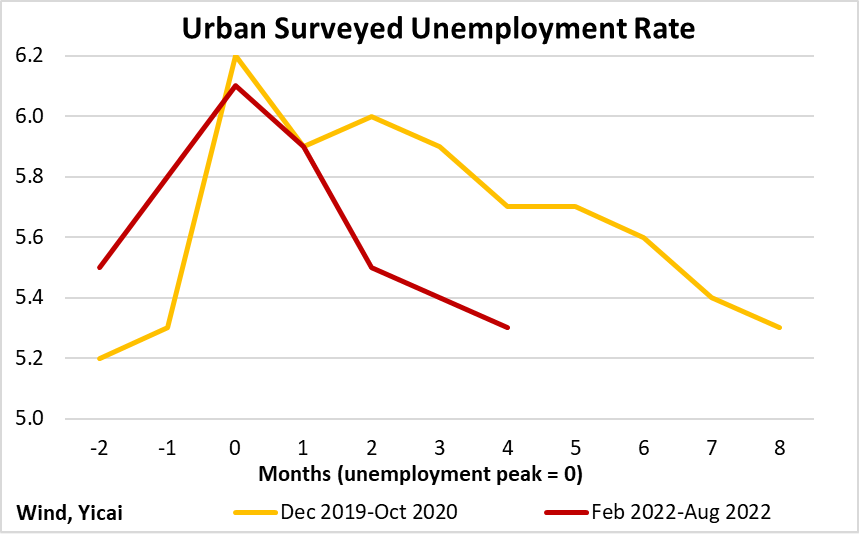 Hours worked this August were quite high compared to the same month in recent years (Figure 7). This means that, even though growth is below potential, there is more than enough work to keep existing employees busy. Elevated hours worked suggests that firms could increase their staffing more aggressively as the uncertainty over the economy’s prospects fades. 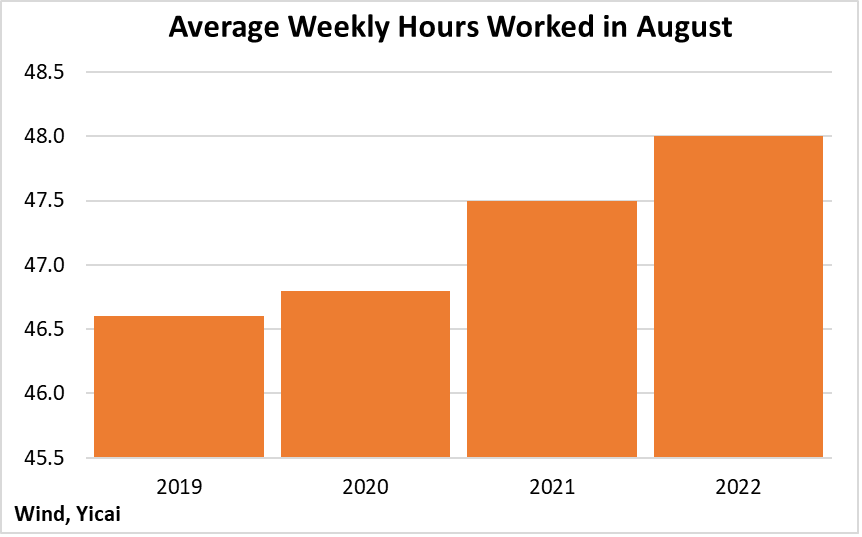 Real estate remains the economy’s weakest sector. The cumulative volume of housing starts between January and August this year is down 40 percent from the average of the previous three years (Figure 8). 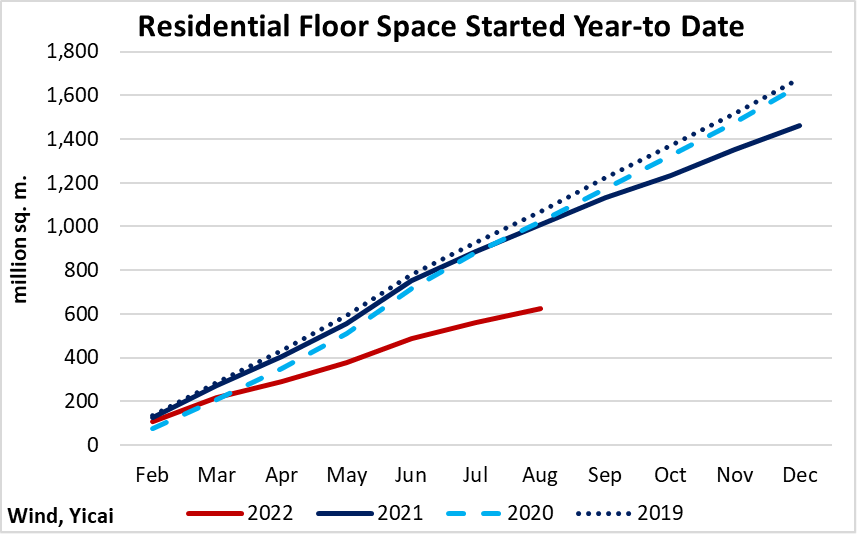 Housing activity is down because developers find it difficult to secure financing for new projects. Concerns over the health of their balance sheets are dissuading lenders from providing new funds to developers. Prospective buyers – who typically pay for their apartments up front – are unwilling to enter the market because they fear the cash-strapped developers will not be able to complete the construction of their homes. The loss of sales revenue – an important source of funding – further aggravates developers’ balance sheet weaknesses, making it even more difficult for them to borrow.

To break out of this vicious circle, local governments have begun to guarantee the completion of real estate projects. For example, the governments of Henan Province and its capital city Zhengzhou have established a CNY10 billion real estate rescue fund and they are seeking additional resources from China’s policy banks. As a result, several suspended projects have been completed.

NBS spokesman Fu Linghui noted that there are initial signs that the sharp drop in real estate sales may be bottoming out. The monthly data on sales of residential floorspace are volatile. Still, the decline in August was “only” 25 percent year-over-year, which represents a significant improvement from the 45 percent fall in April (Figure 9). 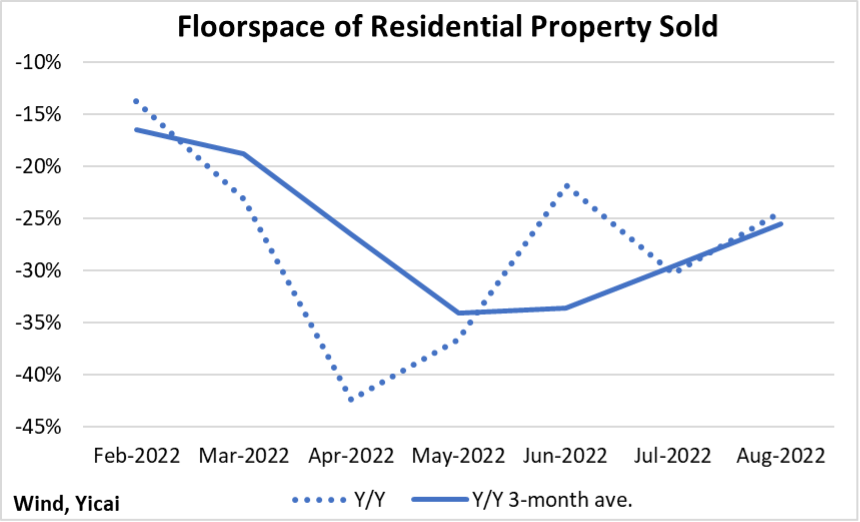 While there are local efforts to support the housing market, at the national level the strategy has been to spend more on infrastructure while promoting investment in manufacturing. Indeed, fixed asset investment growth has been stable as real estate’s fall has been more than offset by strength elsewhere (Figure 10). 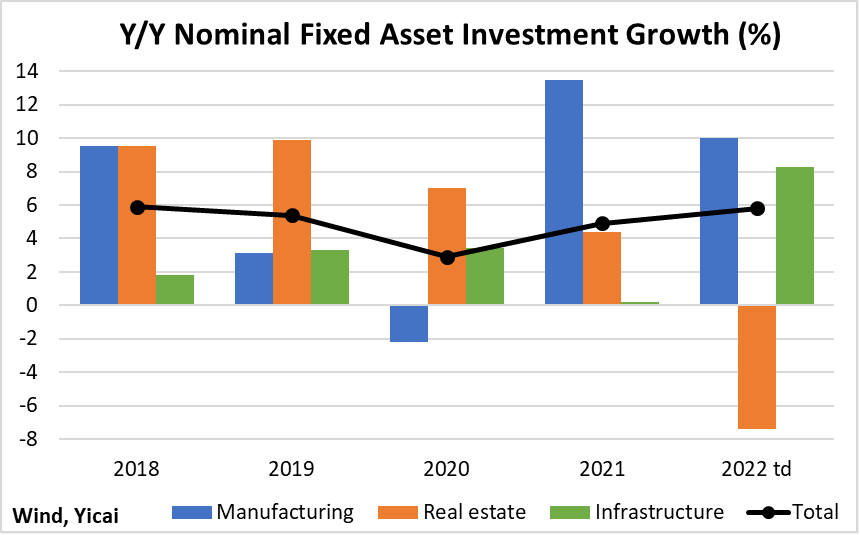 Fu Linghui said that investment in infrastructure has been supported by CNY300 billion (0.3 percent of GDP) in new policy-based lending and allowing local governments to issue an additional CNY500 billion in special debt. He said that much of the infrastructure investment was being directed to transportation, water conservancy, medical care and education.

Export growth decelerated in August after having grown very rapidly in 2021 and the first seven months of this year (Figure 11). Fu Linghui pointed out that the Federal Reserve and the European Central Bank have been tightening monetary policy to manage rising inflationary pressure and foreign demand is expected to weaken. 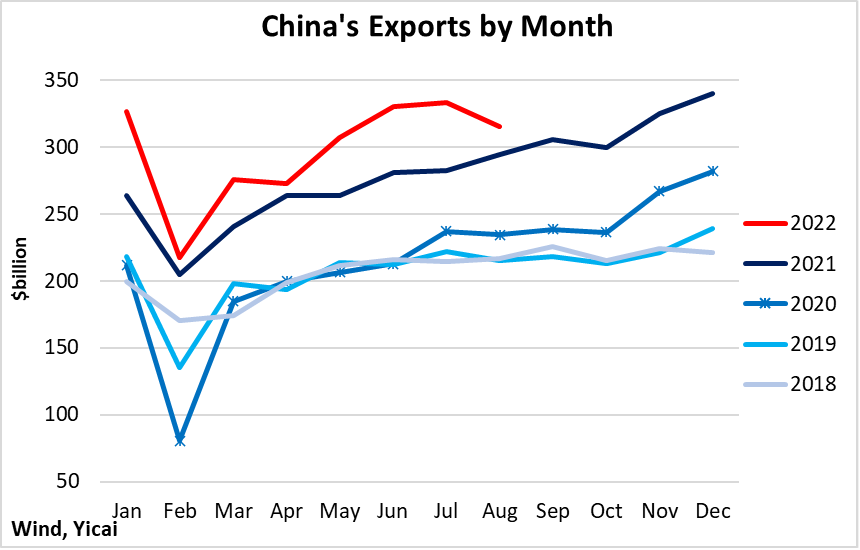 While China’s exports to all major markets decelerated in August, those to the US actually declined below last year’s level. In addition to the effects of higher interest rates, Chinese exporters to the US face the challenge of selling into a market in which inventories are rising. An increase in the US’s inventory-to-sales ratio has typically been associated with slowing imports of goods from China (Figure 12). 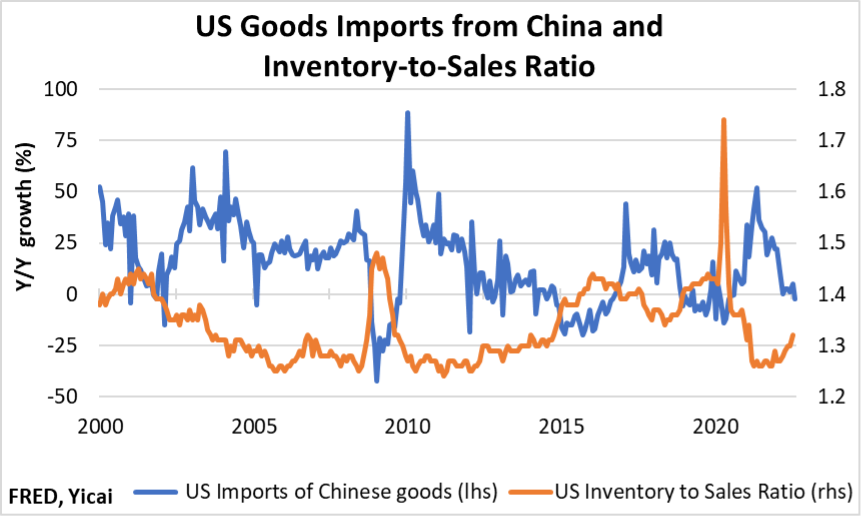 Motor vehicles are an area in which Chinese exports have grown impressively in the last two years. After almost doubling in 2021, the number of vehicles exported is up by 45 percent in the year-to-August. If the current rate of growth can be maintained for the year as a whole, China will export nearly three times as many vehicles as the 2016-20 average (Figure 13). In addition, the price of the vehicles exported this year is a third higher than those sold in 2016-19, suggesting the quality of Chinese-made vehicles is improving. 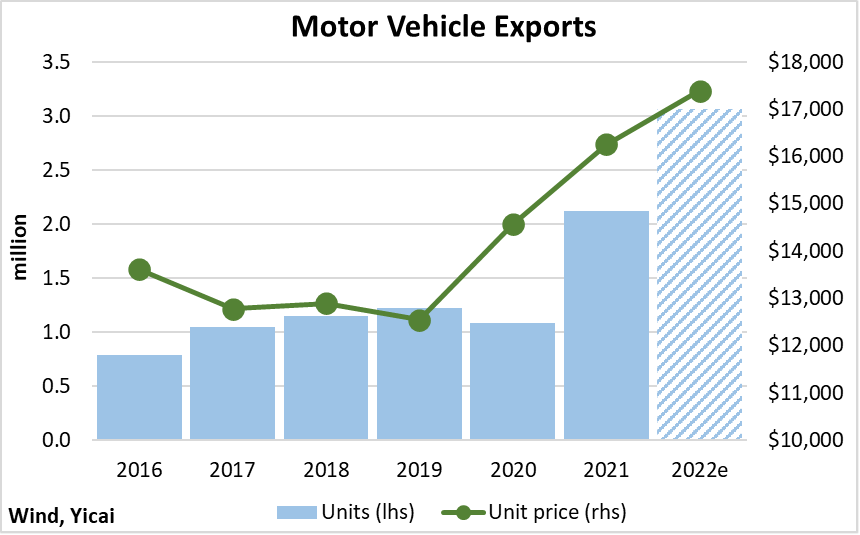 While the economy has not yet returned to normal, there are encouraging signs that it is headed in the right direction. It is unlikely that property developers’ financial difficulties will be resolved in the near term. Moreover, it will be hard for China to maintain a buoyant pace of export growth. Still, with new Covid infections in the last 10 days only one-third as high as their August peak, we can be hopeful that the rebound in consumption will continue.