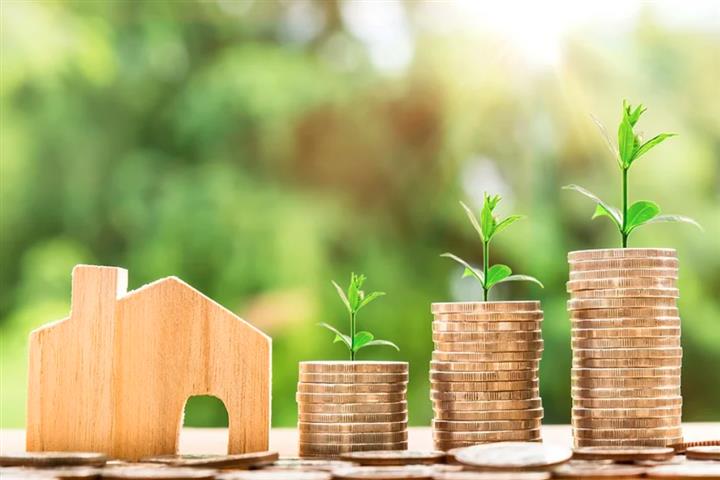 (Yicai Global) Oct. 30 -- On October 23, the Standing Committee of the National People's Congress authorized the State Council to undertake property tax pilot projects. In the piloted areas, both commercial and residential properties are to be taxed while rural homes are to be excluded. The Ministry of Finance and the State Taxation Administration will draft the measures for the pilot projects, which are to last five years.

Residential property is only lightly taxed in China. While buyers pay a levy when they purchase an apartment, there is no nationwide recurrent property tax of the sort collected in OECD countries. China has been considering imposing a recurrent property tax since the early 2000s. Beginning in 2011, Chongqing and Shanghai piloted such taxes but only a small share of the housing stock has been covered by the schemes in these cities. Since China’s home ownership rate is very high and no one likes to be taxed, there is a strong constituency against property taxes. Moreover, the rich and powerful typically own multiple properties and they form a strong vested interest to preserve the status quo.

While it is not likely to be popular, a recurrent property tax is good public policy because it can reduce the investment demand for housing, raise government revenue and close the wealth gap.

Housing in Chinese cities is very expensive. On average, across all urban centers, it takes close to 10 years of family income to buy a home. This is about twice as long as in Canada, the UK and the US (Figure 1). 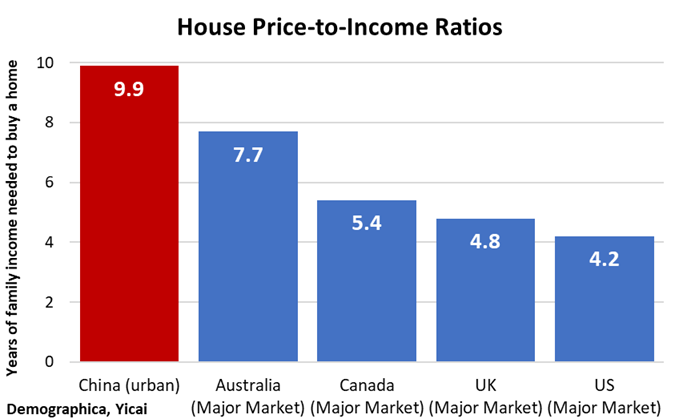 Tax policy is just one of many factors that make Chinese housing so expensive. As a result of rapid urbanization, the value of housing in Chinese cities has increased sharply. Hoping to profit from this trend, many people buy apartments as investments. They often leave these investment properties empty, not bothering to rent them out. The absence of a recurrent property tax makes this an affordable option.

In the West, the existence of a large stock of empty apartments typically indicates a cyclical downturn in the housing market. This sort of overbuilding could pose a financial stability risk. In China, the empty apartments are a structural phenomenon. The units are usually bought-and-paid-for, nevertheless, they represent a social risk as they reduce housing affordability. President Xi has repeatedly said that one should live, not speculate, in housing (房子是用来住的,不是用来炒的). A recurrent property tax will increase the cost of holding an empty apartment and help reduce the investment demand for real estate.

A property tax can also contribute to fiscal finance. As countries become wealthier, citizens' demand for high-quality public services rises. These services need to be funded and, looking across the G20 countries, we see that government revenue tends to increase with income (Figure 2). China intends to double its per capita income over the next fifteen years. This suggests that it will want to raise government revenue by some 3 to 5 percent of GDP. 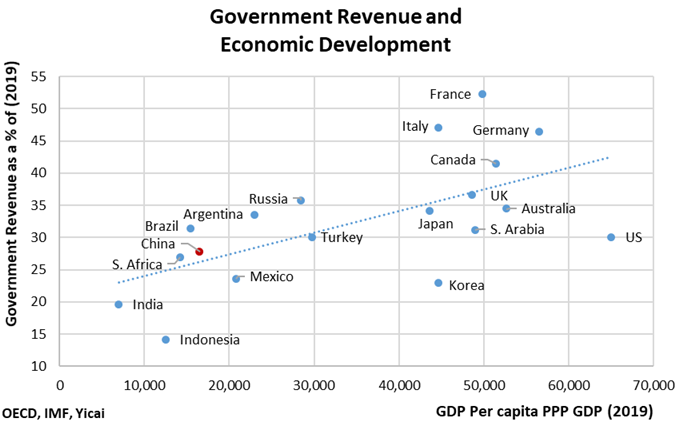 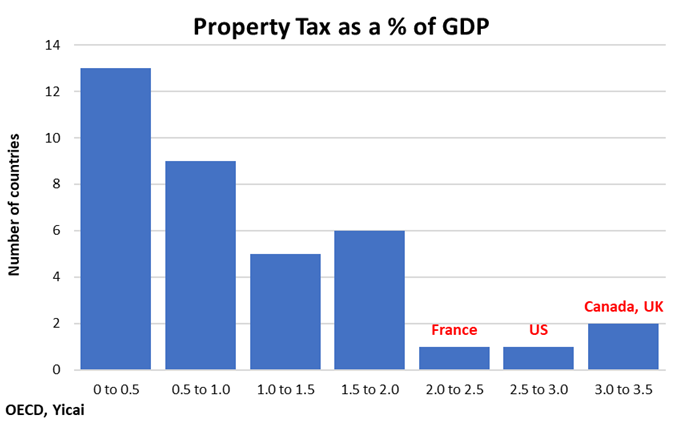 Property taxes are often imposed by local authorities and the rate at which the value of the home is taxed can vary significantly across jurisdictions within a country. For example, in the US, New Jersey, Illinois and New Hampshire impose a 2 percent tax on residential real estate, while homes in Hawaii and Alabama are taxed at closer to one-third of one percent. In Canada, the rates are set by the municipal governments and range from 0.3 percent in Vancouver to 1.2 percent in Halifax.

Since the value of housing in China is large, relative to its GDP, a property tax could potentially make a very valuable contribution to raising fiscal revenue. According to real estate expert Ren Zeping, China's stock of urban residential real estate was worth CNY391.2 trillion as at the end of 2020. Let's assume that the government chooses to tax residential property at 0.8 percent. This would yield CNY3.1 trillion or 3.1 percent of GDP, the same contribution that property taxes make in Canada and the UK. Taxing property at this level would go a long way in financing China's future fiscal needs.

Since Chinese housing is so expensive, relative to income, imposing a property tax could be destabilizing for many families. Family incomes would be especially at risk in First Tier cities – like Beijing, Shanghai and Shenzhen – where it takes more than 20 years of family income to buy a home. For example, if I were to pay 0.8 percent of the value of my modest Pudong apartment in tax, it would eat up more than a fifth of my gross income! This suggests that local governments will have to balance a number of objectives in the design of their pilot projects. To be transparent, the system should capture each and every home, even if the rates imposed on the least valuable residences are de minimis.

A recurrent property tax is also in line with China's policy of promoting Common Prosperity. In a speech at the August 17 meeting of the Central Committee of Finance and Economics, President Xi said that Common Prosperity is intended to prevent economic polarization. It aims to achieve an "olive-shaped" income distribution, with a large middle and small ends. In the context of curbing excessive incomes, President Xi explicitly noted the need to press on with property tax legislation and reform and to effectively implement the pilot projects (要积极稳妥推进房地产税立法和改革,做好试点工作). Property is distributed more unequally than income, so a property tax could help mitigate economic polarization. A progressive property tax, where the rate imposed increases with the value of the property, could be especially useful here.

While it is not yet clear when the pilot projects will begin, the determination to tax residential property could have an immediate impact. It is reasonable to expect that those with many empty apartments will begin liquidating them or renting them out before the rules are fully fleshed out. Indeed, there are concerns that imposing a tax could lead to a sharp correction in the property market, which is already under stress.

Despite the imposition of a property tax, the fundamentals of China’s residential real estate market remain strong. It is true that a massive amount of housing has been built in recent years and that the growth of the population is slowing. Nevertheless, as incomes grow, there will continue to be strong demand for upgrades. Many Chinese city-dwellers live in close quarters, often three generations under one roof, and would prefer more spacious accommodation. As the population ages, the ubiquitous six-story walk-up will become less attractive and the demand for high-rises, with elevators, will increase.

We will also continue to see people flow to the richest Chinese cities, which is reflected in a higher rate of home-price appreciation in first-, second- and third-tier cities (Figure 4). The process of "upgrading" one's city of residence will be supported by the ongoing liberalization of the hukou system, a point made by President Xi in his recent speech. 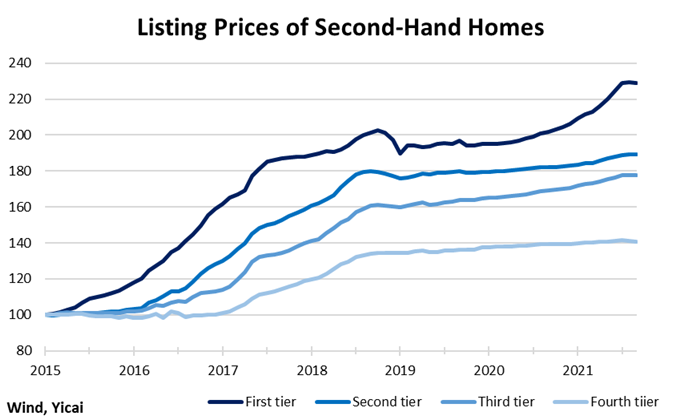 Getting the property tax right will involve difficult trade-offs and getting it wrong risks raising the ire of China's many homeowners. The results of the various pilot projects, over the five-year trial period, will give policymakers valuable practical experience for them to draw on before rolling out the tax nationally. It is a classic example of "crossing the river by feeling the stones".