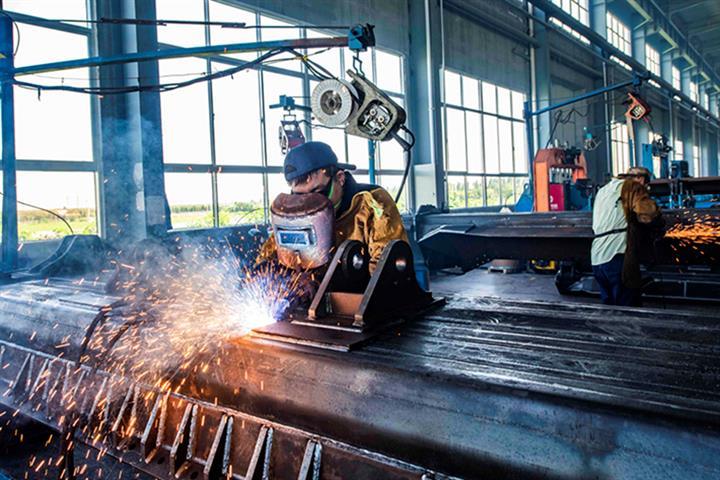 (Yicai Global) Dec. 22 -- On December 15, China’s National Bureau of Statistics (NBS) released its key economic data for November. The numbers showed that the economy continues to grow, albeit at a much slower pace than before the pandemic. Our monthly model suggests that GDP growth remained below 4 percent again in November (Figure 1). Thus, barring a sharp rebound in December, growth in the fourth quarter is likely to be well below the 4.9 percent recorded in Q3. GDP growth in 2019 was 6 percent. 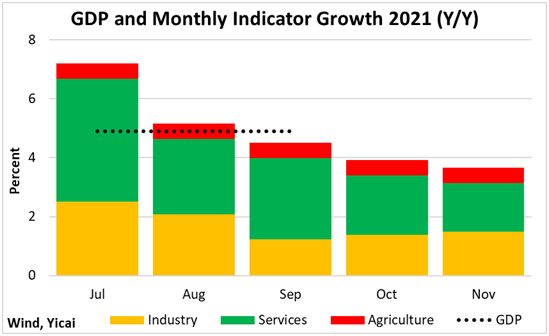 On the positive side, industrial value-added continued to rebound from its September low. The 3.8 recorded in November was a pleasant surprise. The economists surveyed by the Yicai Research Institute had, on average, forecast 3.6 percent.

Chinese industry is benefitting from the progress made in relieving the supply bottlenecks. Domestic raw coal production continued to increase in November (Figure 2). In addition, the volume of coal imports in November was almost twice as high as a year earlier and close to 70 percent higher than November 2019. With coal inventories hitting a two-year high in the first week of December, the rebound in the coal supply makes it less likely that industry will be subject to the sort of power shortages that plagued production in Q3. 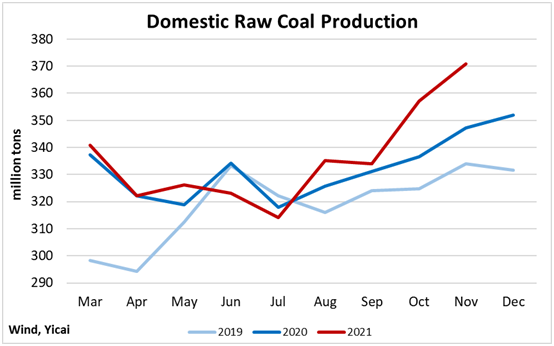 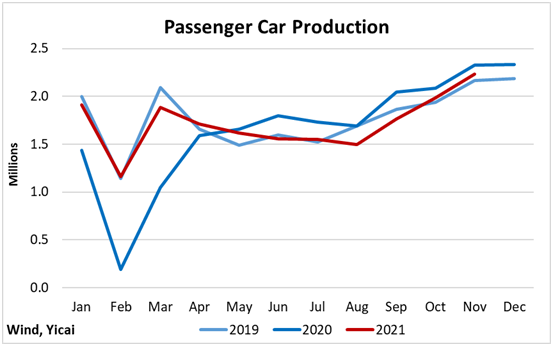 While China’s industrial sector is rebounding, its services stalled further. The NBS’s service production index slowed to 3.1 percent year-over-year in November. This is less than half as fast as the index grew before the pandemic. Despite Covid infection rates in China that are much lower than elsewhere in the world, consumers remain cautious about engaging in activities where human contact is high. Catering sales fell by close to 3 percent year-over-year, after modest growth in September and October.

Caution is affecting consumption more generally as well. Retail sales only rose by 3.9 percent year-over-year in November. This was down a percentage point from October. It also disappointed the economists surveyed by the Yicai Research Institute who forecast 4.4 percent.

Surveys conducted by the People’s Bank of China show that, despite the recovery, consumer sentiment remains well below pre-pandemic levels. In September, just 24 percent of those surveyed said that they planned to spend more. This was down from 27 percent, on average, in 2019 (Figure 4). The surveys indicate that consumers remain more pessimistic about their incomes and their employment prospects than they were before the pandemic. This caution is likely translating into higher precautionary savings. 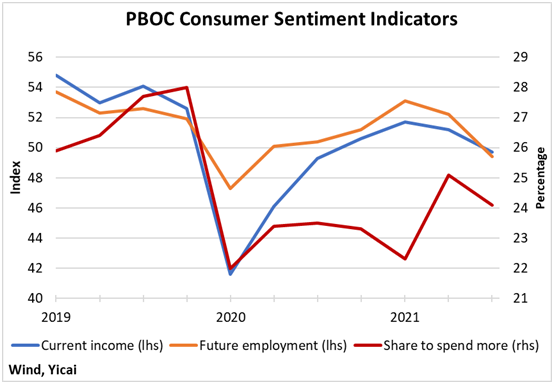 Consumer pessimism is infecting the property market as well, where sales have dropped sharply after a very strong first half. Weak housing demand has led to a decline in home prices across China’s 70 largest cities (Figure 5). While the prices of homes in the smaller, third-tier, cities are now essentially unchanged since January, those in the more desirable first- and second-tier cities are still posting modest gains. 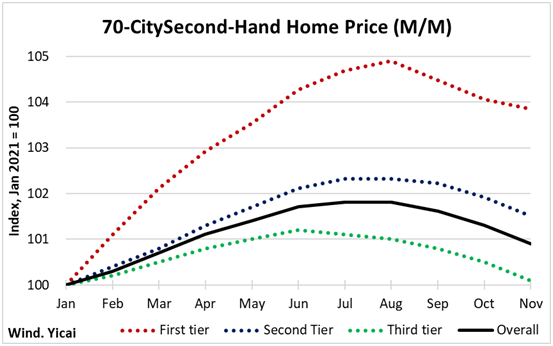 While the indicators remain robust, there was a slight deterioration in China’s labour market conditions in November. For example, the surveyed unemployment rate was 5 percent in November, compared to 5.2 percent, on average in 2019. However, November’s rate ticked up slightly from October’s 4.9 percent. In addition, average weekly hours worked fell off by 0.8.

The NBS rightly points out that the economy has over-achieved on the authorities’ target of 11 million new urban jobs, having created more than 12 million through November.  Over-achievement of this target is the rule rather than the exception. Between 2015 and 2020, the target was exceeded, on average, by 27 percent. I estimate that, by December, it will “only” be over-achieved by 16 percent (Figure 6). 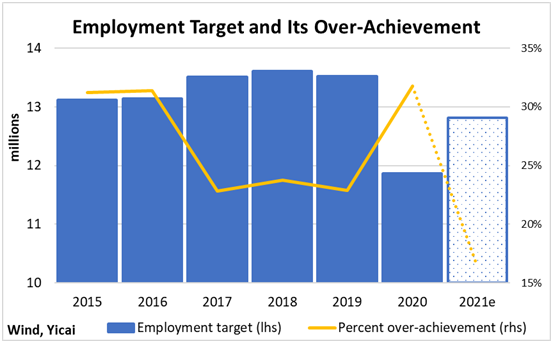 On the other hand, the employment component of the non-manufacturing PMI is trending away from its 2019 average, indicating increased labour market weakness in this sector (Figure 8). 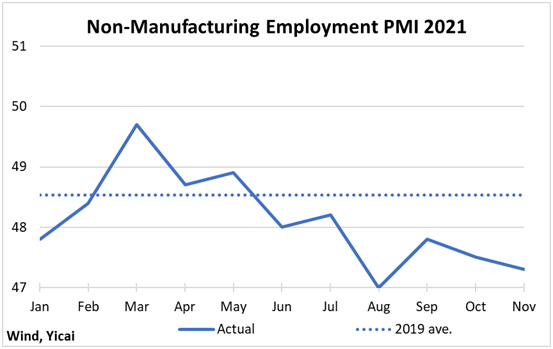 So far this year, the deficit has been much smaller than it was in 2020 (Figure 9). The Budget foresaw revenue growth of 8 percent based on nominal GDP growing by 10 percent. So far this year, revenue is up 15 percent on 14 percent growth. The difference between the cumulative balances this year and in 2020 is close to 2 percent of GDP. 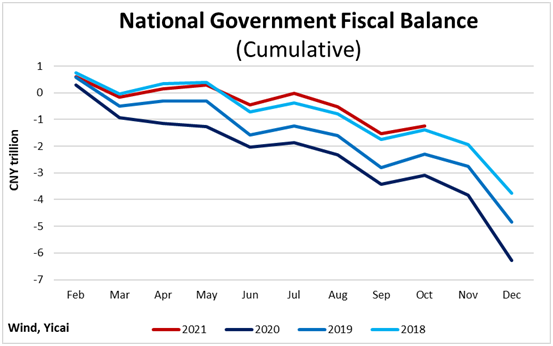 During March’s Two Sessions, Premier Li Keqiang said that the money supply and aggregate finance would grow in step with nominal GDP. Having engineered a steady slowing in money and credit, it looks likely that these indicators will be growing in the 9 percent range by the end of the year or broadly in step with nominal GDP. Despite the recent decrease in the reserve requirement rate and the reduction of interest rates on some central bank re-lending facilities, monetary policy does seem to be neutral. 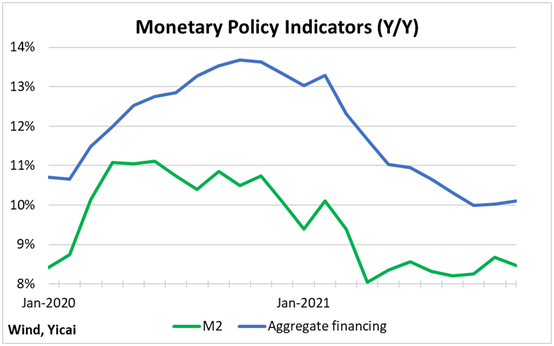 Looking ahead, it is not clear how long this growth slump will last. The authorities are putting a high premium on making sure the Omicron variant does not get a foothold in the country. For example, we have been strongly discouraged from leaving Shanghai during our daughters’ school holiday. We will likely vacation on Chongming Island rather than Hainan Island and travel by metro and taxi instead of by plane.

The government’s tolerance for slow growth will depend on the evolution of the labour market. At the Central Economic Work Conference held earlier this month, the Leadership stressed “stability” in the face of the “triple pressures” of shrinking demand, supply shocks and weakening expectations. Next year’s policy mix will have to balance several considerations.

Controlling financial risks will remain a priority and a large-scale monetary easing is unlikely. We can expect the government to increase spending on “new infrastructure” including 5G networks, ultra-high voltage electricity transmission, high-speed rail and charging stations for electric vehicles. It is also probable that fiscal policy will be oriented to reinforcing the social safety net. Not only would this be in line with the Leadership’s Common Prosperity initiative, it could also reduce the need for precautionary savings and boost consumption.