Will the Fed Need to Rein in Excess Demand? 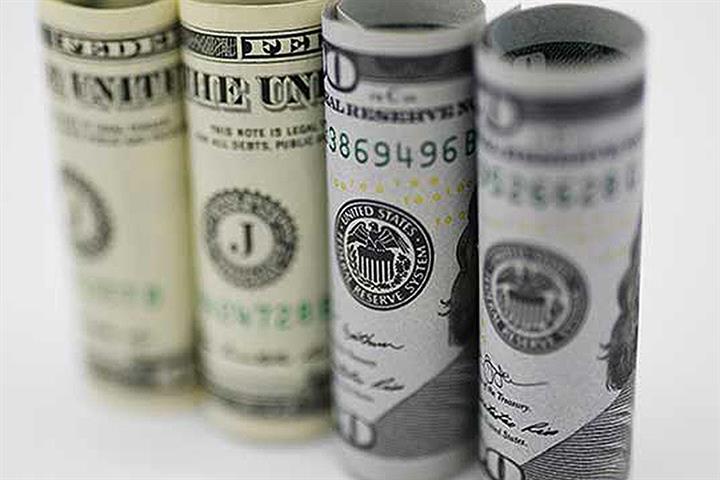 Will the Fed Need to Rein in Excess Demand?

(Yicai Global) Aug. 30 -- On August 27, Fed Chairman Jerome Powell delivered a speech entitled “Monetary Policy in the Time of COVID”. The speech was given at the annual Jackson Hole economic policy symposium, which is sponsored by the Federal Reserve Bank of Kansas City. This year the participants could not enjoy the beautiful Wyoming scenery, as the symposium was held virtually.

In his speech, Chairman Powell provided important guidance on the near-term conduct of monetary policy. He suggested that the Fed could begin to slow the rate at which it has been purchasing assets later this year. With respect to the Fed’s dual mandate, “substantial progress” has been made in meeting the inflation objective and “clear progress” has been made toward meeting the maximum employment objective.

However, he stressed that “conditions consistent with maximum employment” would have to be met before the Fed raised interest rates. In his view, there was still “much ground to cover to reach maximum employment” as 6 million fewer workers were currently employed, compared to the February 2020 peak.

Notwithstanding the importance of “maximum employment” in the conduct of monetary policy, the Fed does not specify a fixed goal for this objective. Fed policymakers do provide their projections of what the unemployment rate would be in the absence of shocks. In their June Summary of Projections, the median estimate was 4 percent, with the range of estimates being 3.5 to 4.5 percent.

With July’s unemployment rate at 5.4 percent, we can get a sense of just how much more ground needs to be covered before interest rates rise (Figure 1). In the same June Summary, Fed policymakers project that the Fed Funds rate would remain at 0.1 percent through 2022. Rates would only rise to 0.6 percent in 2023, which is well below the longer-run projection of 2.5 percent. 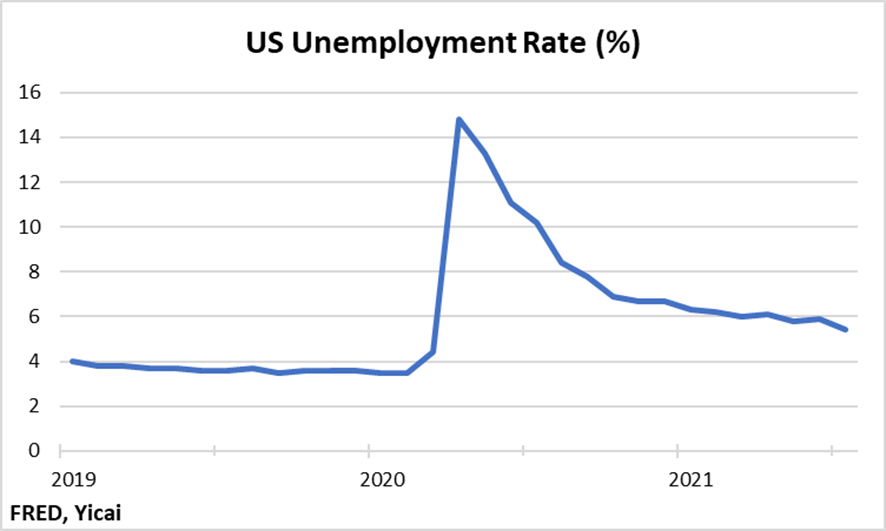 Despite the apparent slack in the labour market, the economy might soon enter a period of excess demand that could make it difficult for the Fed to achieve its dual mandate of low and stable inflation and maximum employment.

The July Budget and Economic Outlook published by the US’s Congressional Budget Office (CBO) provides a useful baseline for assessing the near-term risks to the Fed’s dual mandate. Let’s focus on the CBO’s estimate of the “output gap” – the difference between its forecast level of GDP and its estimate of the economy’s productive capacity (potential GDP). The output gap is a summary measure of the supply–demand imbalances in the economy. It is negative during recessions. A positive output gap indicates that the economy is overheating.

The CBO forecasts that, in part due to the economic stimulus bill passed in March, GDP will rise above its potential level in the second half of this year. For the year as a whole, the output gap will be 1.4 percent, up sharply from -3.7 percent in 2020 (Figure 2). In 2022, the stimulative measures will push the economy’s projected output even further above its potential level, with the output gap reaching 2.4 percent of potential GDP. The CBO expects significant excess demand to persist through 2024. In fact, the output gap could be even bigger than what the CBO projects. That is because its projections only take enacted legislation into account. Likely, both the proposed USD1 trillion infrastructure bill and the draft USD3.5 trillion budget will stimulate the economy further. 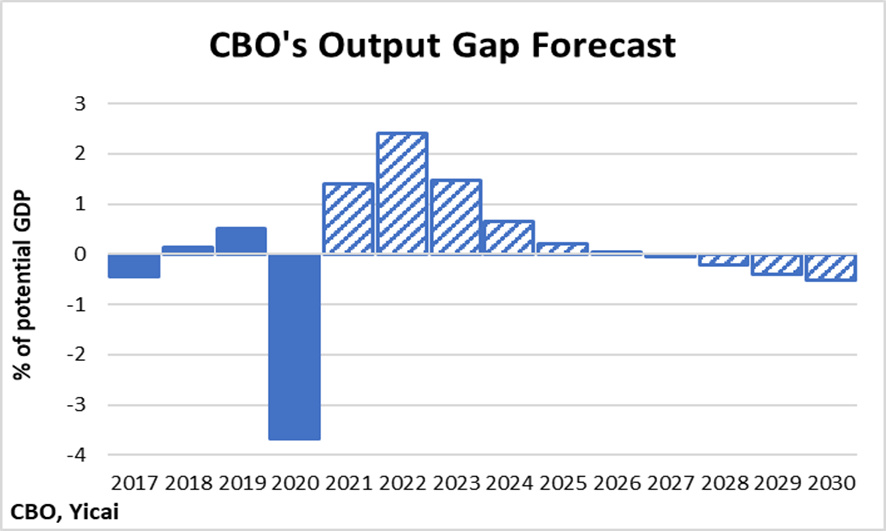 The CBO is fairly sanguine about the effect of the hot economy on consumer price inflation. It forecasts that inflation will rise to 2.8 percent this year before returning to 2 percent in 2022. Even though the economy will be operating well above potential, the CBO expects the Federal Reserve to keep interest rates low over the next few years. In the CBO’s projections, the three-month T-bill rate averages 0.1 percent in 2022 and 0.7 percent in 2023 despite the large output gaps.

But what if it turns out that inflation is a lot less benign than the CBO expects?

Inflation has picked up significantly this year (Figure 3). Headline inflation hit 5.4 percent in July, its fastest rate of year-over-year increase since August 2008. Core inflation, which strips out the effects of the volatile food and energy components, dipped to 4.3 percent in July from 4.5 percent in June. But June’s reading was the highest in 30 years! 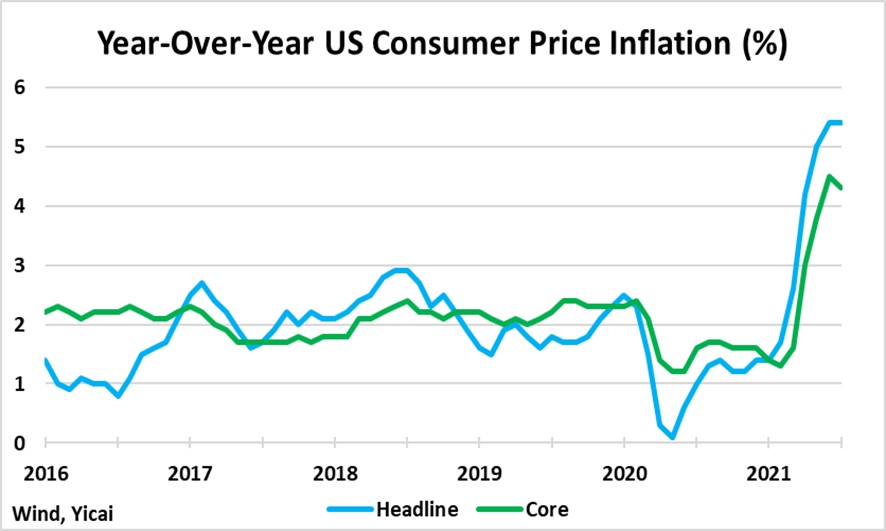 Most analysts agree that the spike in inflation this year is the result of temporary supply effects. For example, the prices of new and used cars have increased significantly as a result of the computer chip shortage. Car prices alone contributed 1.6 percentage points to headline inflation. Rising gasoline prices contributed a similar amount. The Fed has been correct in not raising interest rates to counteract these “supply shocks”. However, the US economy will be entering excess demand in the context of rapidly rising prices. This makes it more likely that inflation will remain high and that expectations of high inflation will become more entrenched.

The upward risks to inflation are exacerbated by rigidities in the labour market. While the unemployment rate is still elevated, the fear of becoming infected, an inability to find child care and the availability of extended unemployment benefits are often cited as reasons for the short supply of workers and rising wages. According to the Atlanta Fed’s Wage Growth Tracker, “weighted wage growth” – the measure preferred by the Council of Economic Advisors – hit 4.2 percent in July (Figure 4). This is the same pace of increase as recorded before the pandemic hit, when the unemployment rate was below 4 percent. There is a risk that effective labour market tightness combined with expectations of rising inflation could very well lead to wages and prices spiralling out of control. 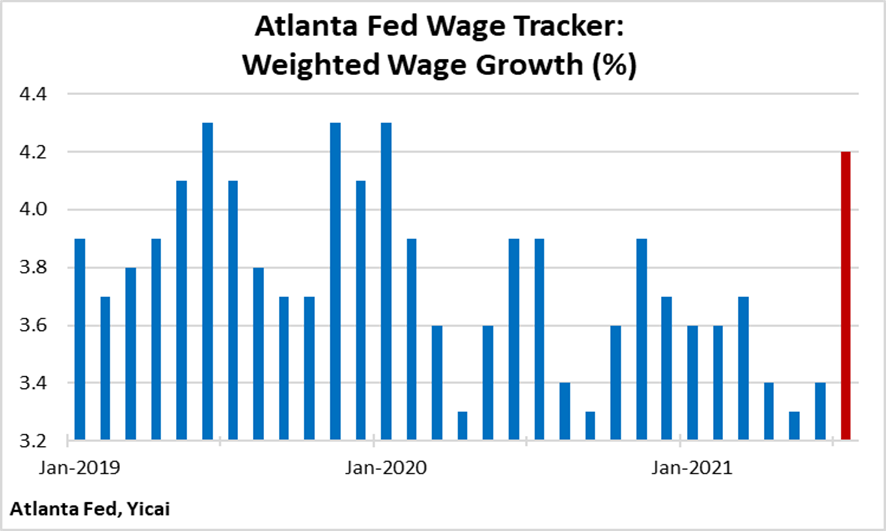 Ultimately, inflation dynamics will depend on the response of monetary policy. Last year, the Federal Reserve adopted a “flexible inflation target”. Under this framework, monetary policy will seek to achieve inflation that averages 2 percent. But it will allow inflation to rise above 2 percent for some time following periods when it has been below 2. It is uncertain how the Fed will implement this framework in practice and this could lead to inflation expectations becoming less-well anchored.

Ultra-low interest rates on US government debt have encouraged yield-seeking behaviour. Investors have bid up the prices of assets to bubble-like levels. For example, the S&P 500 stock index is selling at 21 times forward earnings. Over the last two decades, the index sold at an average of 14 times forward earnings. This implies that stocks are 50 percent more expensive than they should be.

Moreover, investors have increasingly purchased assets in riskier classes in an effort to maintain yields as returns have fallen. For example, a record amount of high-yield (non-investment grade) debt was issued last year in the US corporate bond market. The data through July suggest that even more high-yield debt will be issued this year. Should current trends persist, high yield issues will account for more than 30 percent of all corporate bond finance raised in 2021 – an all-time-high share. Investors have also shown a hefty appetite for “leveraged loans” – credits to low-quality borrowers that are structured and sold on the market. The high prices of quality assets and the proliferation of riskier ones mean that both classes are vulnerable to sharp corrections if interest rates rise unexpectedly and risk appetite falls.

But it is not just the financial markets that are at risk. Joelle Scally, Administrator of the Center for Microeconomic Data at the New York Fed, notes that Americans have borrowed heavily in the last year, “We have seen a very robust pace of originations over the last four quarters with new extensions of credit for mortgages and auto loans combined with rebounding demand for credit card borrowing.”

Just as low interest rates led investors to bid up the price of stocks, low mortgage rates are inflating house prices. In July, the median new home sold for $390,500, up 19 percent from January 2020 (Figure 5). 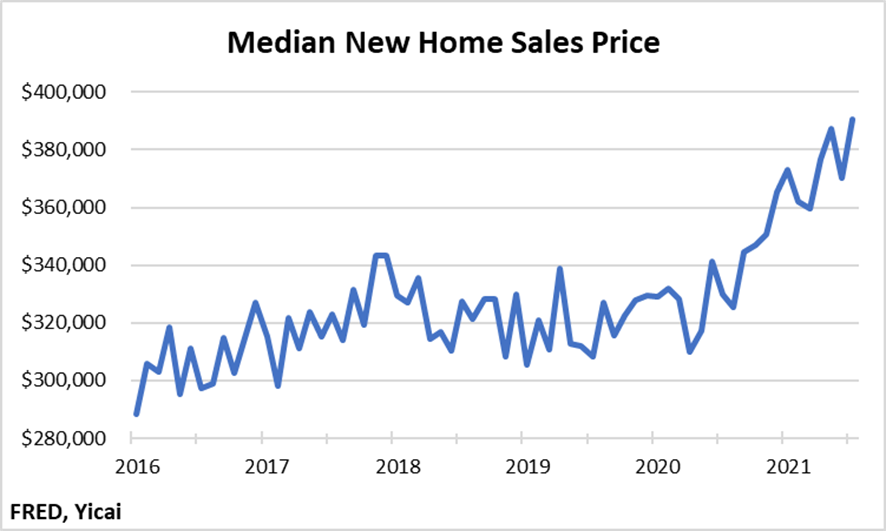 Like the financial markets, households are expecting interest rates to stay low and their ability to service their debt to remain intact. However, a sharp rise in interest rates could entail serious difficulties for these borrowers. Moreover, Ms. Scally reminds us that “…  there are still two million borrowers in mortgage forbearance who are vulnerable to financial distress once the forbearance programs come to an end.” Thus, for the household sector, an unexpected increase in interest rates could crimp spending and put the recovery at risk.

In his speech, Chairman Powell was at pains to emphasize the need for “a careful focus on incoming data and evolving risks.” He expects that incoming data will provide more evidence that some of the supply–demand imbalances are improving and inflation is moderating.  Let’s hope he’s right.