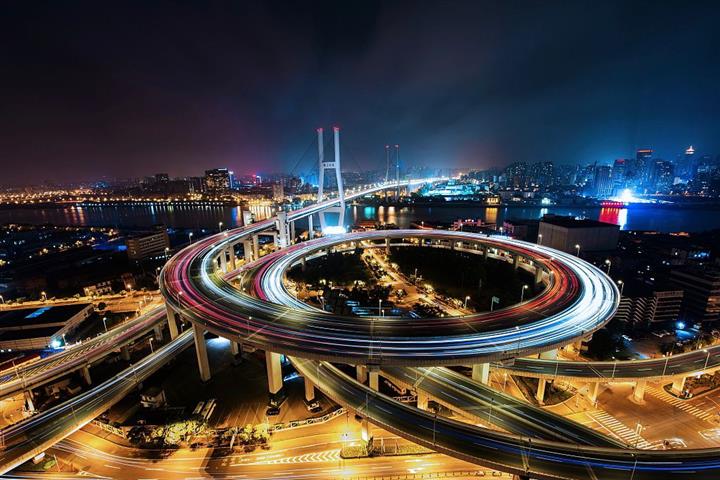 (Yicai Global) Jan. 19 – China yesterday released its gross domestic product data for 2020, showing an annual growth rate of 2.3 percent. Though this is the lowest tally for the country since 1976, it comes out of a world rocked by Covid-19 disruption with China the world’s only major economy to grow in real terms.

China’s strict lockdown and mass testing regime subsequently overcame the impact of the virus early on, while many other countries suffer severe economic depletion due to prolonged shutdowns, including the United States, United Kingdom and European Union. China’s supply chains also proved resilient in providing medical equipment to the rest of the world.

Forecasts for China’s GDP this year are set to amount to around 8 percent, buoyed by a broader global recovery which will be facilitated by the rollout of vaccines and the end of lockdown restrictions. Despite the optimistic forecasts, challenges will potentially remain in first spearheading a recovery in local consumption which is central to China’s future strategy, as well as offsetting challenges posed by the US which have been spearheaded by the outgoing Trump administration. Nonetheless, China has positioned itself ahead of the world and the priority simply revolves around mitigating risk by an opt to stability.

How China’s Recovery Came About

Following the advent of the Covid-19 pandemic in Wuhan in early 2020, China’s GDP suffered its first modern contraction due to the strictly imposed national lockdown to curtail the spread of the virus. Although this caused short term economic damage, the uncompromising nature of the shutdown combined with the comprehensive testing regime authorities employed led to the eradication of the outbreak and a return to normal life, keeping global supply chains resilient. The same methods have also prevented a comprehensive second wave which gravely beset most of the world.

As other countries failed to overcome Covid-19 outbreaks, China’s economy returned to growth rapidly as it became a lifeline for medical supplies from masks to ventilators, personal protective equipment and more. That saw China’s exports and trade surplus surge to record levels by the end of the year despite the broader global recession. The positive health of China’s economy also led to record inbound investment, as investors identified the country as a safe haven and source of stability away from volatile markets elsewhere. All of these methods have allowed China to return toward its normal growth trajectory without having to resort to mega stimulus measures.

From here, China is forecast to have strong growth, which is expected to come in a huge burst in the first three quarters of the year before settling down to pre-pandemic growth levels. Whilst China’s exports and industrial productivity have fuelled the recovery, key to sustaining it will be a revival in domestic consumption which has been inhibited the most through social distancing measures and a loss of public confidence in activities such as shopping, eating out, moviegoing and more. A successful vaccine rollout will be fundamental to facilitating this, as per the rest of the world. This will in turn help the exports of other countries into the Chinese market rebound.

China’s relationship with the US will be one to watch as well. Although the Trump administration’s spree of destruction is not posed to make a meaningful difference to China’s growth trajectory, nonetheless the question is more how much can the two powers reconcile under the Biden administration, whom Republicans are attempting to box in to a tough strategy on China. Impetus will be on Beijing’s effort to try and negotiate a breakthrough with the White House into removing the Trump era tariffs, which have had a negative impact on the US jobs market, and at the very least facilitating a stable mode of co-existence in opposition to the cold war rhetoric and push for decoupling advocated by the likes of Secretary of State Mike Pompeo.

On this premise, investors should expect China to invest hard in rebuilding the US relationship, or “damage control,” and ultimately avoid provoking further confrontation with Washington, which will paint an optimistic picture for markets. Beijing will also continue its drive to consolidate new free trade and economic agreements with other countries, with a particular focus on upgrading ties with South Korea. Although these will not have a run-on impact on annual GDP, they will deliver increasing confidence as to where investors should be looking.

Irrespective of this, whilst there will be a few bumps in the road, all signs point toward a positive year ahead for the second-largest economy which sustains several huge advantages in respect to competitors, putting it on track to potentially become the world’s largest by 2028. China’s healthy position will be instrumental to driving forward the global recovery which ultimately calls into question the logic of some who advocate the politics of “decoupling.”