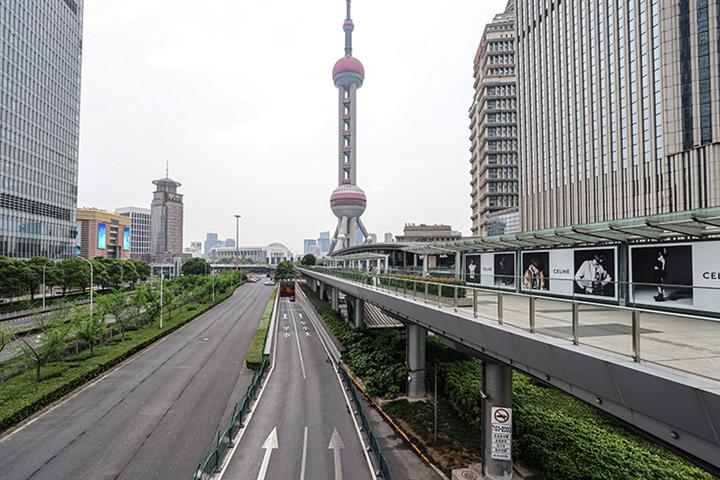 (Yicai Global) June 2 -- Shanghai’s lockdown is finally coming to an end. The largest city in China, hope to 25 million people, has been embattled by an outbreak of the omicron variant which forced a shutdown lasting approximately 2 months long. This has been a hard experience. However, with newly confirmed cases reduced to double digits and community transmission eliminated, authorities are now pursuing a gradual and phased reopening throughout the city and restarting economic activity. Many of the most critical enterprises, such as the Tesla factory, have restarted, in addition, China-Europe exports from the city have also commenced once again.

But there is a lot to be done in order to get things “truly back to normal”. Shanghai is a megacity, one which is the largest in the world by population and serves as the effective industrial, commercial, and financial capital of China. Shanghai’s might is so strong that the other cities around it, including Ningbo and Hangzhou, are effective “artery” cities that economically flow into it, meaning to have taken such a shutdown undoubtedly sent shockwaves not just for those who couldn’t go out, but throughout China. A covid lockdown completely represses consumption and creates challenges for shops and restaurants, which in turn has a run-on impact on manufacturing demand, supply chains, and by extension, every single business on the spectrum. In which case, drastic policies are needed in order to immediately reinvigorate economic activity.

Contrary to popular belief, and for which matter that which is stated in the western media, China’s economy is despite the lockdown, not in a position of weakness. Although now the world faces unprecedented economic challenges, which have included the run-on effects of the crisis in Ukraine and the end of the “covid recovery slump”, China still has some advantages. In the year 2021, its GDP growth stood at 8.1%, whilst in the first quarter of 2022, it also registered a 4.8% year upon year growth. Talk of a “Chinese slowdown” irrespective of covid factors, is deliberately misleading. Its target for the year as a whole was set at 5.5%, although because the challenges now faced are acknowledged this may be unlikely, yet it reminds us the fundamentals of the economy are in a good position to rekindle themselves.

As a result, the government of the Shanghai municipality over the weekend announced a series of policies to immediately boost economic activity in the city and catch up on the time lost. This includes a plan “composed of 50 policies and measures”. First of all, following a lockdown, businesses suffer because they are not only deprived of income but also because their costs continue to accumulate, creating losses and unemployment. Shanghai first of all aspires to waive some of these costs to follow them, this includes a delay of the “collection of social insurance fees for food service, retail, tourism, civil aviation, land, water, and rail transportation businesses” a delay in “tax filing deadline for qualified individuals and companies”, a “6-month rent reduction for small businesses that rent from state-owned properties” and “Property and land tax waivers” for businesses. Xinhua also reports that the proposals will “grant subsidies for non-resident users regarding water, electricity and natural gas fees.”

In addition to relieving businesses from various costs, the city also endeavors to ease the burden on individuals too. For example, if you are in lockdown and your income is jeopardized, how can you readily pay rent? The city will offer a “30% subsidy for private-owned properties that reduce rent for tenants”. In addition, subsidies will also be offered per head for businesses that don’t lay off workers, whilst payments will also be given to businesses who employ recent graduates or long-term unemployed, in order to offset the inevitable rise in unemployment such a shutdown incurs.

In addition, the city will also proceed in investing in a number of infrastructure projects, this is particularly critical in restarting key sectors such as construction, and has pledged to “regenerate” certain areas. These policies will allow the economic fundamentals of the city to quickly reassert themselves and offset long-term damage. Whilst a slump is to be expected in the short-term, attention should be paid to the strength and speed of the rebound and how China returns to its “normal trajectory”.

Finally, it should be noted that the western media’s interpretation of China’s economic prospects is always deliberately negative and politically motivated. In the age of geopolitical competition, it has become more endemic for news organizations to deliberately play up pessimistic stories concerning China’s growth prospects and talk of a crisis, which frequently never age well. The Shanghai lockdown of course was a tough experience and a tough decision to take, one which was hard for the local population to endure. However, there is now light at the end of the tunnel. Policies are being prepared to quickly hasten life back to normal and to give its locals reprieve. Now that China’s dynamic zero-covid policy has been established as the way forwards, it is also likely this scenario will not repeat itself and focus will be placed on pre-emptively snuffing out outbreaks as the accepted standard. Shanghai will bounce back again.