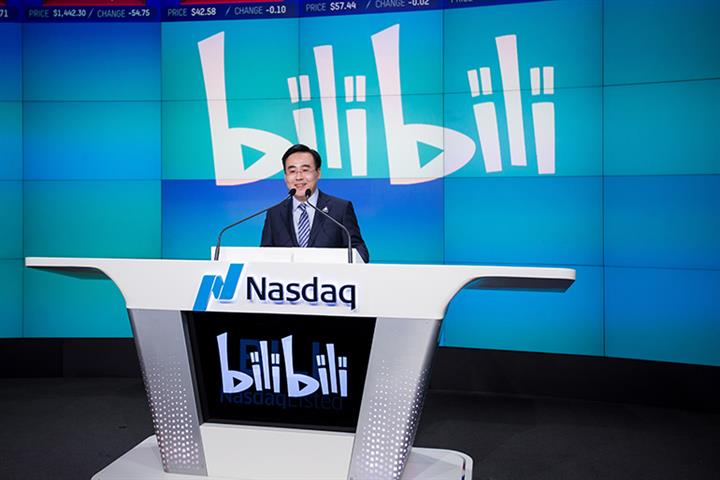 (Yicai Global) July 2 -- Financial and economic media frequently use the word ‘Buddha-like’ [‘Foxi’ in Chinese], which is also quite popular online, to describe the mindset of Bilibili founder Chen Rui when talking about him.

I think ‘Buddha-like’ has gained online popularity because youngsters feel like they have no other choice when facing the great pressures of life amid a world full of changes. However, I am dubious when such a word is used to describe Chen. How can a person with a ‘Buddha-like’ mindset succeed in running an internet-based company?

Chen indeed shows his ‘Buddha-like’ disposition if you take a closer look at him. He grew up in Chengdu, capital of southwestern Sichuan province, where he enjoyed the leisurely, comfortable life in that city. He is optimistic, but without the bloodshot eyes many business starters have from staying up so late. Chen always speaks in an unhurried tone and has a tranquil light gleaming in his eyes.

Chen talked to me about his experiences. He was born in 1978 and became the general manager of the business department at Kingsoft Internet Security at the age of 28, and co-founded Cheetah Mobile at 32. He funded Bilibili as an angel investor when he was 33 years old, giving up his 9-digit stock options before Cheetah Mobile’s listing, to join Bilibili as its chairman. It had fewer than 50 employees and could not even be regarded as a company at that time.

Focusing on the business, Chen slept for three or four hours each day after joining Bilibili, and wound up expanding its workforce to 5,000 in six years. “I feel like the company will go bankrupt every morning when I wake up,” Chen said. He still has this crisis awareness even now and has even posted the statement “The Tetris [a Russian tile-matching video game] tells us that the mistakes you make will accumulate, while the success you achieve will disappear” in the ‘What’s Up’ column of his WeChat account.

I wondered how an entrepreneur born in the 1970s can create products popular among those born in the 1990s or post-2000s. I asked Chen about this, but he did not give me a satisfactory answer. I did find it out in my talk with him, though, from the cartoon figures displayed on the table in his office and the staffer working alongside him with the dyed yellow hair [so common among Chinese youth], that the answer lies in this kind of inclusiveness. In such a swiftly-shifting society, in which every three to five years divides a generation in terms of their hobbies, Chen, born in the late 70s, is nonetheless able to get along quite well with post-90s and 00s, which shows his inclusiveness. Since the Buddha is the most inclusive of all, it turns out to be a bit appropriate then to describe him as ‘Buddha-like’ from such a perspective.

Inclusiveness has always also been one of Shanghai’s most salient features. Chen said that he moved Bilibili from Hangzhou to Shanghai out of intuition, which seemed like ‘going against the grain’ at that time, but this choice definitely shows his prophetic vision. Shanghai’s character of openness, innovation and inclusiveness has no doubt carved out for it space with the least limitations and provided the most fertile soil for the growth of Z-generation and Nijigen [Japanese, which literally means the two-dimensional world, and refers to the characters and stories in animations, comics and games] culture.

The foregoing is Yicai Global’s authorized repost from the ‘Moduxiaoshaobing’ WeChat account.