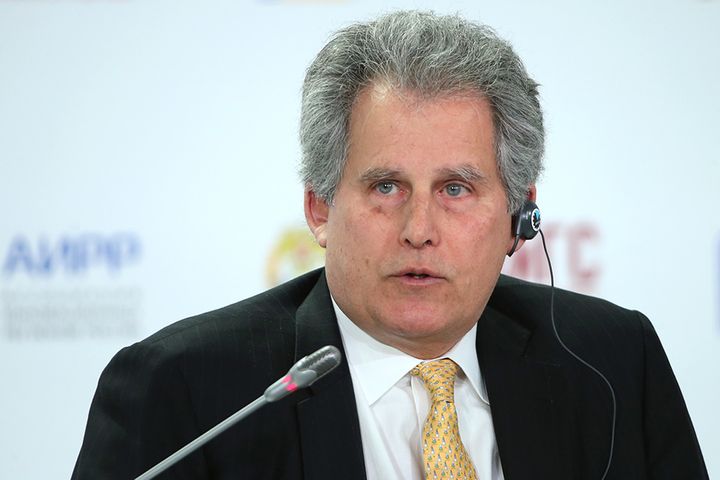 (Yicai Global) April 30 -- The prospect for the world economy is full of uncertainties after global market turmoil last year. The US lacks upward pressure on inflation, so the Federal Reserve will observe before cutting interest rates, according to David Lipton, the first deputy managing director of the International Monetary Fund.

Lipton sat down for an exclusive interview with Yicai Global during the spring annual meetings of the IMF and the World Bank Group this month in Washington, DC. The Fed's decision making will cover all factors, including inflation and maximum employment, the dual mandate, as well as possible influences on inflation from other countries, he said.

"There is the puzzle that the economy is strong, unemployment is at a long time low and wages are rising, but inflation has not accelerated," Lipton said. "So, I think they [the Fed] need to be watching to see how the puzzle sorts itself out … they should set policy based on how that evolves." He was uncertain about an interest rate cut.

Lipton will visit China in June this year when the IMF and China will discuss the fourth item. "IMF's advice for years has been to in a well thought out and well sequenced way liberalize interest rates. Market forces can play an important role in channeling the money of savers to the best investment opportunities," he told Yicai Global, promising to talk about the issue with China.

A transcript of the interview follows:

Yicai Global: Global economic growth has continued to slow. Panic selling in the fourth quarter of last year increased market concerns about a recession, and the Fed held on interest rises. Do you think the Fed's rate hike cycle has already ended? Is a rate cut coming?

Lipton: The Fed made the changes that it did because they saw the situation in the economy changing. I think they had been normalizing because they could see inflation rising, and they wanted to get into a process of normalization that matched up with the strength of the economy and with the return of inflation, but I think they noticed that inflation just didn't seem to be accelerating, so they paused.

They take into account everything that they think is going to affect their two goals; their two goals being price stability and maximum employment. So they look at developments in the United States, meaning the strength of the economy and wage process -- the wage increases -- the inflation process and job hiring. They look at things happening in the rest of the world and all the other events to see how they affect employment and inflation. But looking forward, there is no yes or no answer to your question. They mean what they say, and I certainly hope that they mean what they say, in the sense that they now will have to be watching to see what happens in the economy.

There is the puzzle that wage increases continue, but inflation hasn't threatened to go above target. The fact that the economy is strong, that unemployment is at a long time low and wages are rising, but inflation has not accelerated, is a puzzle. So I think they (the Fed) need to be watching to see how the puzzle sorts itself out. And I imagine, and I think they should, set policy based on how that evolves. And so I don't think it's possible really to know what they're going to do, unless one knows how all these events will play out. Factors that are geopolitical, whether it's Brexit or trade tensions, factor in because they can affect all of those things. And they have to see about that as well.

Yicai Global: Financial stability is more important than before to regulators after the financial crisis. The US stock market, the mainland Chinese market and other world stock markets have all rebounded significantly from the beginning of the year up to now. The markets may have not created bubbles, but will this arouse concerns about financial stability again?

The Fed is focused essentially on its dual mandate of inflation and maximum employment. If they thought that financial stability would affect those two goals, they would take that into account.

You are right that after substantial equity price declines late last year there have now been very substantial equity price increases. That's true in the United States, it's true in Europe and it's even more true in China. I think all of us economists ought to be asking ourselves why this is happening and whether the markets have justification for these valuations. And we ask ourselves not because we particularly care about critiquing the judgments that are made by markets, but in order to anticipate what might happen if asset price valuations turn out not to be justified and markets changed their mind.

Fundamentally, asset valuations will depend over the longer term on whether the volatility stays low, whether the interest rates stay low, but also whether economies continue to grow so earnings justify the valuations. So when we look at asset valuations going up as much as they have, it leads us to say we need to do a lot of analysis. We need to look closely add this, as I say, mainly in order to be able to anticipate whether there might be at some point a correction, so we can anticipate what effects that might have.

Yicai Global: Let's talk about global trade. The World Trade Organization's current rules emerged when the world was not connected by the internet, and the outdated trade system does not support high-speed innovations. China, the US, and Europe have several disputes over digital trade, and they are developing their own system. Digital trade talks between different countries under the WTO framework take too much time. Do you think a technology iron curtain will come down?

We understand, however, that when there are these kinds of competitions other issues arise. In these new technologies, there are a set of new issues. One very important one is around data privacy. It's fair to say as between China, Europe, and the United States, there are different views and social values about the importance of data privacy and the need to respect that, and the ways in which government should help people protect themselves. And it's entirely possible that if the regulation on data privacy is different in the different places that you get this kind of segmentation: different treatment in different places.

Secondly, we know that there are concerns around the world about cyber security. This has for many years been a factor in the US and in other countries when they make decisions about what investments to allow in their country. But more and more, it's becoming an issue because technology is embedded in goods that are traded. It's becoming an issue around trade, not just investment. I think the debate around the use an adoption of 5G technologies is showing the conflict that may arise.

It would be unfortunate if the world became segmented into different 5G clubs … because so many other goods and services will be using and linked to 5G that it would likely mean a fragmentation much more broadly than just the technology itself… We ought to recognize that the issue is there's a link between the use of technology and the integration of global trade.

Yicai Global: Now that technological progress will influence economic growth, what role will the IMF play?

Lipton: What we've been concerned about, whether it's about data privacy, whether it's about competition and antitrust that may arise in the expansion of these very big technology companies, or whether it's about cyber security, it is the job of the fund to urge members to try to find ways to maintain cooperation, to develop common approaches, if possible, to regulation and, where necessary, codes of good conduct, so that goods trade, services trade can remain integrated.

The risk, and I think it's a significant one, and I know China as a country has long seen itself as an important representative of all the developing countries, the point is that avoiding a fragmented economy, maintaining an integrated economy, I think it's really key to the economic future for most of the developing world. The developing world is going to need to continue to have free trade, it's going to need to import investment goods, those investment goods will all be infused with the new technologies. They need that so that they can equip their people with capital and technologies, and in doing so raise living standards over time. So a fragmentation would be worst for the developing world.

Yicai Global: Are you encouraging China to give up its developing country status?

Lipton: No, that's not what I mean. I very much admire the way that China not only promotes itself but is also always advocating for the developing countries around the world. That's a very admirable thing to be doing.

I'm saying that part of that is to be also looking for solutions to any conflicts that may arise in terms of the uses of new technology, the regulation of new technology, whether its fintech or AI, or the many other technologies. I think we need to be looking for ways to be maintaining integration and avoiding fragmentation.

Yicai Global: China and the US reached a consensus at the G20 last December. The IMF also thinks reducing trade uncertainties will benefit global economic growth. What do you think about the future of China-US trade?

Lipton: We've been suggesting for the last two years that the United States and China have dialogue in order to overcome the differences of views and the disagreements they have. And now they're having that dialogue, and that's good.

We don't know what's going on in these negotiations, but both sides have been making some public statements that would lead you to believe that the discussions, the recent discussions, are heading in a constructive… that they're making some progress.

Our advice stays the same, which is that there's a burden on both sides to have a dialogue, to treat seriously the arguments of the other side to try to resolve the differences.  As I've said before, I think there are some trade practices and policies that China has had that it's probably in China's own interest to change, and it can change as part of the negotiation. And it's important that the US respond if China is willing to make those changes by lowering the tensions and trying to reach an agreement.

Yicai Global: China's money market has already been liberalized, but the central bank still decides the benchmark rate for savings and loans, so interest rate liberalization has one last stop to go. The central bank is promoting the reform with expectations to speed it up this year. Does IMF have any advice on this?

Lipton: I'll be visiting China in June. The IMF's advice for years has been to, in a well thought out and well sequenced way, liberalize interest rates, so that market forces can play an important role in channeling the money of savers to the best investment opportunities. And I think that a lot of progress has been made.

I think our advice is to continue that process. We certainly want to see that carry forward because we think that will be best for growth as well as being best for Chinese depositors.