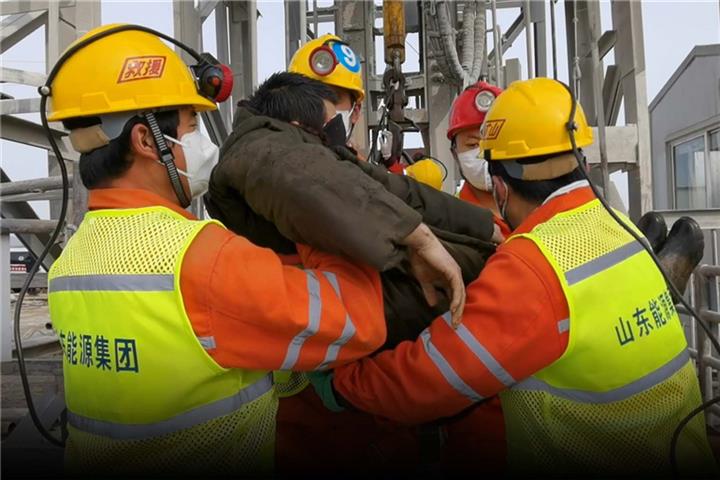 (Sixth Tone) Jan. 25 -- Rescue workers have extracted 11 of the 22 miners trapped in a gold mine in China’s eastern Shandong province after an explosion on Jan. 10 left them stranded hundreds of meters underground with no communication to the surface.

According to livestreamed footage Sunday from Sixth Tone’s sister publication The Paper, rescue workers in Qixia, the county-level city where the mine is located, lifted the men up from below via a small elevator, their eyes blindfolded to protect them from the sunlight after spending two weeks underground.

One man who had been trapped in a separate section of the mine from another 11 of his co-workers was extracted Sunday and is reportedly in “extremely weak physical condition.” During The Paper’s livestreamed coverage of the rescue, he is seen being loaded onto a stretcher and wrapped in a blanket. Workers in more stable condition were able to walk to waiting ambulances on their own.

One blindfolded worker clasped his hands in a gesture of gratitude to the rescuers. “I first want to let my family know I’m alive,” he said.

Another worker who was seriously injured during the initial explosion has been confirmed dead after suffering a head injury and falling into a coma. Still another worker is said to be further down in the mine than the rescue team is currently able to reach, and the fate of nine others is still unknown.

The rescue team made a major breakthrough Sunday. Just days before, they had estimated that it might take another two weeks to free the workers, citing a massive blockage that was delaying drilling efforts. However, they discovered a gap in the blockage Sunday that hastened their progress.

Around a week after the explosion, rescue workers managed to send food, medicine, and other supplies down to the group of 12 trapped miners through several boreholes drilled into the earth. Life detectors and nutrient solutions were also lowered down to other sections of the mine in hopes of discovering more of the missing miners.

The accident caused a national outcry due to the initial sluggish response of the company overseeing the mine. Despite being required by law to notify local authorities of any on-site emergencies within one hour, the company waited more than a day to do so, apparently hoping it could resolve the matter quietly.

In the aftermath of this dereliction of duty, two government officials were dismissed from their posts, and at least one person from the mining company has been taken into police custody.

This is an original article written by Wang Xuandi of Sixth Tone and edited by David Paulk. It has been republished with permission. The article can be found on Sixth Tone’s website here.