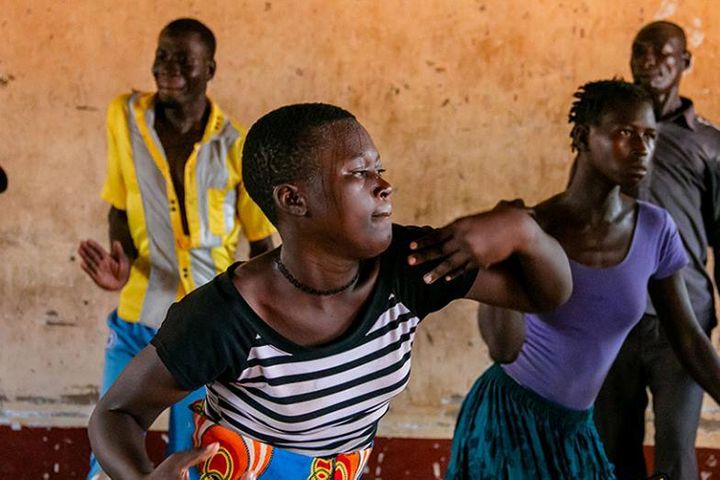 (Yicai Global) June 26 --  In Uganda, dance has been at the centre of youth transformation and community outreach for a while now. In 2017, a group of young dance lovers in the capital city of Kampala realised they could put their talent to use helping others, notably the many people their age who were struggling with drugs and unemployment. They created Kuhamahama, which means a nomadic dance movement.

What makes Kuhamahama's model different from other dance projects is that it operates countrywide, and mostly in rural areas. The project has travelled to more than 80 villages in east and northern Uganda so far. One of the reasons it works is that the organisers incorporate each region's traditional dances into the styles that are taught. They fuse the dances with messages addressing the most prevalent issues in the areas they visit.

Joyce Driciru*, 21, lives in Maracha District, in the West Nile region, and says she was so hooked on drugs that her family had given up on her. "I also had a young child to look after. I felt so hopeless that the drugs were my escape," Driciru says. When the Kuhamahama dance project visited Maracha, she attended their first workshop, where youth talked about the challenges they faced. Hearing other young people share similar stories encouraged her to go back the next day.

"In the workshop, I realised that even as a single mother, I could succeed at whatever I put my mind to," Driciru recalls. Soon the dance rehearsals started and she participated. Taking part in this has given her an emotional outlet and a way to deal with whatever happens to her. It has enabled her to give up drugs, and she now runs a dance group of her own.

The Kuhamahama groups are each asked to produce a dance piece based on a local story or issue. They perform it for local audiences, in collaboration with local dance crews, organisations and schools. These become their networks to performing opportunities in the area.

There is healthy competition among the groups. Each one's progress is tracked, with the most outstanding groups and people getting to perform at the annual Batalo East dance festival, a popular event with awards for the best performers and where participants can learn new dance skills from others.

After Anthony Hanyerere dropped out of school in Butaleja District, eastern Uganda, he spent his days drinking with friends. He had been a dancer in school but nothing came of it. When one of the Kuhamahama projects visited Butaleja, he attended the workshops and now oversees a local dance troupe of his own.

Hanyerere employs about 20 young people who dance mostly traditional dances popular in eastern Uganda. The group makes money by performing at different events across the country and appearing in music videos. Each gig earns the group approximately 565,000 Ugandan shillings (around USD 150).

"In a month, we make at least 860 dollars, which we share amongst ourselves at the end of the month," Hanyerere says. This has given the group financial freedom where there was none before. When they tell their stories during workshops in other rural areas, young people who can identify with their stories soon join.

Douglas Benda Kasule, a drama teacher and arts researcher in Kampala, says the benefits of dance beyond physical fitness have been overlooked for years. He says more people are now seeing its ability to change communities.

"I have been following the Kuhamahama project and note that it is a multi-beneficial arrangement where the youth are not only helped to change their mindset, but it also helps them create their own jobs and fight poverty," Kasule says.

The group's benefits have caught the attention of local leaders, who have started supporting it. For instance, the District Education Officer of Maracha and the Executive Secretary of the council for health and education helped the group find public rehearsal space. That rehearsal then attracted nine girls and 10 boys who joined the project.

Until recently, the young people who started the Kuhamahama project raised the funding themselves. They used the money to book spaces, buy refreshments and rent sound systems. Today, more public spaces are becoming available to them for free, and they have also attracted funding from organisations such as Africalia, a Belgian Development Cooperation initiative.

The youth also invite the police to be part of their workshops and events. Abdul Kinyenya, a member of the project, explains that their aim is to illustrate that crime can be curbed if young people are busy and discouraged from using drugs.

In general, social issues in Uganda are addressed by NGOs, whose initiatives don't always speak to youth. Dance, and the arts in general, barely receive any government funding, and are perceived as hobbies to be pursued alongside more "serious" careers. Projects like Kuhamahama give young people a way to keep busy while making a career of something they consider fun.

Until now, Kuhamahama has benefitted more than 25,000 people, 60 of whom have started dance groups. According to the project coordinator, Abdul Kinyenya, the goal is to help one million youth out of drug abuse and other social problems, to restore traditional dances, and to help people earn a living from a career in dance.

*Name has been changed at the source's request