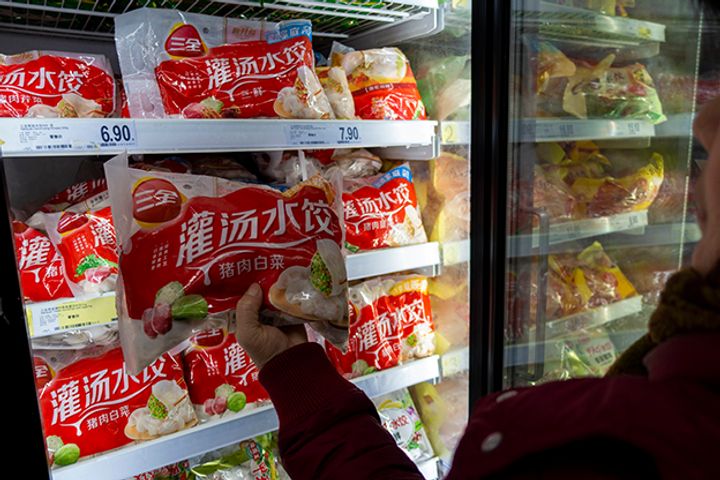 (Yicai Global) Feb. 18 -- Sanquan Food has denied that African swine fever virus was found in its dumplings, but many firm purveying frozen pork are feeling the chill, nonetheless.

Investors questioned the accuracy of this bombshell on the interactive platform of the Shenzhen Stock Exchange on Feb. 14.

Sanquan Food has received no notice from authorities as of now, and the company will further investigate the incident, was its reply.

At over 30 percent of its total offering, frozen dumplings are a mainstay of the firm, which is based in Zhengzhou in eastern Henan province, and a major source of its revenue source. An earlier virus scandal once stripped supermarket shelves of the firm's dumplings in Guangzhou and the firm was severely sanctioned.

Though no evidence has ever come to light that ASF can cross the species barrier and infect humans, public hysteria pays little heed to cold science. Other food firms have also been caught up in the epidemic before Sanquan. Anjoy Foods' Anjoy branded pork meatballs also contained swine fever virus, the firm said in a Jan. 27 statement.

The entire industry has insufficient testing capacity for the disease and raw materials from pig products may be contaminated even if brought from non-epidemic areas and covered by full certification.

WH Group also caught a case of the fever last August. City officials pinpointed its Zhengzhou slaughterhouse as an epidemic point. It was sealed off for six weeks.

Sanquan Food will face three challenges if authorities confirm the above news, food industry analyst Zhu Danpeng said. The company's frozen dumplings will drop out market channels for a short time, which will hugely impact sales and shrivel market share. In the midterm, suppliers and sellers will lose trust in it and turn to other brands.

The ASF virus induces a deadly hemorrhagic fever with high mortality in pigs but causes no signs of illness in its natural hosts, bushpigs, warthogs and ticks, public information shows.

ASFV is thus the only double-stranded DNA genome-virus known to be transmitted by an arthropod -- the soft tick. The epidemic is endemic to sub-Saharan Africa, where it persists in the wild via an infection cycle of ticks to wild pigs, warthogs, bushpigs, and vice-versa. It first became known after colonists from Europe imported domestic pigs into endemic areas and is therefore an 'emerging infectious disease.'