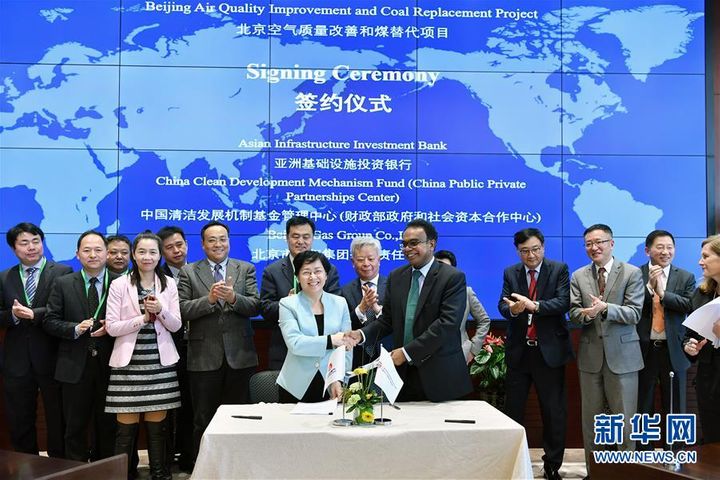 (Yicai Global) March 20 – The Asian Infrastructure Investment Bank (AIIB) signed the contract for its first investment project in China yesterday, per which it will build a natural gas pipeline network across Beijing to help complete its coal-to-natural gas clean energy transition.

AIIB held a signing ceremony with state-backed Beijing Gas Group Co. and the revolving China Clean Development Mechanism Fund, which receives regular capital infusions from the central government to advance low carbon growth, Beijing Daily reported. AIIB approved the investment in December. The loan amount is USD250 million.
The new natural gas pipeline network will extend to 510 villages in Beijing county and connect over 217,000 households. After the project goes into operation, it is anticipated to reduce 650,000 tons of standard coal consumption, 595,700 tons of carbon dioxide emissions, and 3,700 tons of particulate emissions per year in the city and its environs.

The investment will help China promote the use of clean energy and improve air quality, and this comports with the bank's investment strategy and service principles, an AIIB staffer said. AIIB will focus on future investments in China's environmental protection, energy conservation and efficiency enhancement, reduction of carbon emissions and the improvement of infrastructure and connectivity in its border areas.

The coal-to-gas project in Beijing has come to an end, said Xue Jianning, general manager of Beijing Gas Group Co. About 185,000 rural households have linked up with the project, but the network has not covered relatively remote villages with weak infrastructure. It is expected that another 30,000 rural households will complete their shift from coal to gas this year.