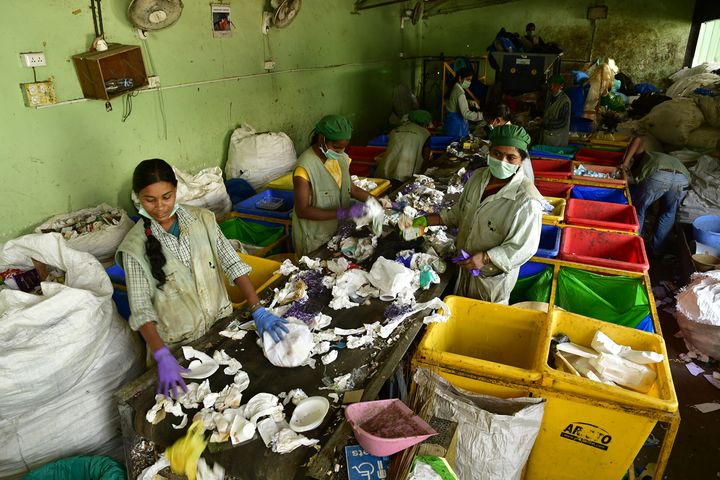 Around 9 a.m. every day, Rajendran and his team hop into their pickup truck to collect waste from companies in the IT hub Electronics City, in Bangalore, India. At each destination, Rajendran uses a smartphone to scan a QR code previously given to the company.

The team then weigh each type of waste (wet, dry, rejects) on a digital scale and enter the weight information on a mobile application. "Even those who don't know how to read can use it, as different streams of waste are colour-coded," he says.

The app, called "I Got Garbage" (IGG), was developed by the Indian IT giant Mindtree, and it helps Rajendran and his team at the Electronics City Industrial Township Authority (ELCITA) Solid Waste Management Centre generate invoices for the 103 companies they serve. It analyses the data in order to determine the weight of each sub-category of waste. With this information, companies can draw up plans for waste reduction in particular streams, such as wet or dry waste, plastic waste and construction debris.

Mindtree launched IGG through Mindtree.org — the company's corporate social responsibility initiative — in Bangalore in 2014, to empower rag pickers (informal waste collectors), increase their collection capacity and help them climb up the value chain using technology to better organize their work flow and payments. Prashant Mehra, Vice President of Social Inclusion for Mindtree, says that in mid 2015, his team started approaching various municipalities with the IGG platform. "While many were excited about it, no one wanted to start using it," he notes. "The reason and season had not yet come together like it did in Bangalore, Karnataka, and Hazaribagh, Jharkhand." In 2016, Extended Producer Responsibility was mandated and it was only in 2018 that the governments started getting serious about it. Since then, the apphas been deployed in seven cities across India.

Today, as many as 16 partners — mostly non-profits — work with IGG in these cities. It has helped transform the lives of nearly 10,000 rag pickers and scrap dealers previously working in the informal sector, with some now managing their own micro businesses. Over the years, these rag pickers and scrap dealers have been able to recycle 52 million kg of solid waste and compost roughly 127 million kg of organic waste thanks to the app, thus preventing 212 million kg of waste from ending up in landfills, according to Mindtree.org.

Mehra says the company has now embarked on a new project that aims to help 50 cities recycle or reduce their use of plastics using IGG. For the project, christened Prithvi, Mindtree has partnered with the United Nations Development Program (UNDP), Hindustan Coca Cola Beverages (HCCB), and local municipalities.

It is via the Prithvi project that the company hopes to empower and mobilise around 40,000 more waste pickers. "The platform is available free of charge. We realised that if waste pickers can use it, other people who want to scale up the value chain can also use it and benefit from it," Mehra explains.

Over the years, the company has also been able to come up with a blueprint of what it takes to create a zero waste city. "Based on our experience, we know what it takes for a city to have a robust solid waste management systemin place," Mehra says. "How to promote source segregation and home composting, solid waste management centres that have to be set up, what the capital expense should be for the municipalities, and so on."

Mindtree has also been able to draw up a waste maturity model and is approaching municipalities across the country. These municipalities could adopt the model, put systems in place as per the blueprint and work towards becoming zero waste cities.

Follow Yicai Global on
Keywords:   I Got Garbage,Mindtree,Earth Beats