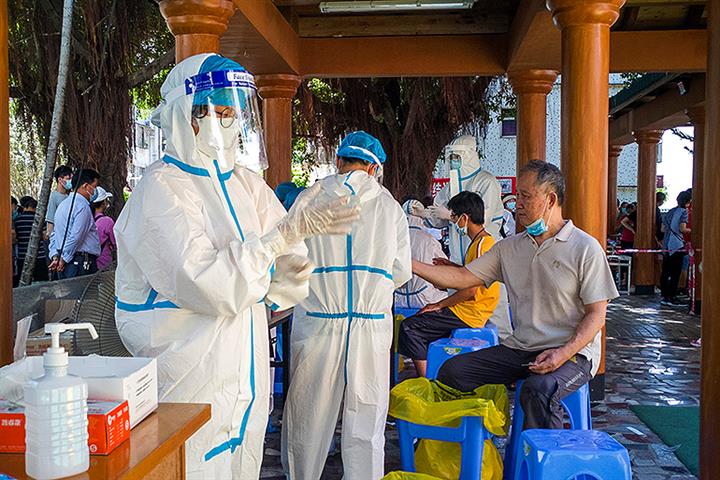 Another Covid-19 Case Emerges in Shenzhen, Source Yet To Be Confirmed

(Yicai Global) Aug. 17-- Shenzhen confirmed a new local case of Covid-19 after nearly half a year last week. This has again raised doubts over the safety of imported frozen food. Monitoring and inspecting the whole process is difficult, and the source of the virus has not been confirmed yet due to the large number of food imports, a local grocery store worker told Yicai Global.

Shenzhen is a major importer of frozen food, noted Jiang Tao, project manager of a large Shenzhen-based fresh food import company. Companies first select brands before purchasing frozen food overseas. However, during this period there is no way to arrange quality inspection to supervise the whole process. Some seafood is processed instantly on the fishing vessel, while some brands entrust a third-party factory for processing, Jiang added.

Importers entrust a qualified organization to conduct quality inspection of seafood imports before customs clearance, but it’s impossible to have full inspection of products, Jiang said. A container is about 25 to 28 tons, so customs usually conduct random checks due to the large quantity.

Guangdong province, where Shenzhen is located, has tested 145,900 samples of imported frozen foods since June, and only three were found to be virus-positive, and the virus had been inactive and did not have the ability to infect people, Deng Huihong, director of the Guangdong Provincial Center for Disease Control and Prevention, told a press conference yesterday.

A local female worker at the grocery chain Hema Fresh, owned by Alibaba Group Holding, was diagnosed with Covid-19 on Aug. 14, the Shenzhen Municipal Health Commission announced. Two other employees of the same store and three family members of the patient were later identified as asymptomatic, unveiling new local cases after nearly 180 days.

Shenzhen authorities closed all 21 Hema stores in the city on the same day and conducted nucleic acid tests on all employees and food. The city has collected 83,413 samples after emergence of the newly confirmed cases and has found no other new infections since, Luo Le, director of the Shenzhen Municipal Health Commission, said yesterday. Regulators have checked Hema’s surroundings and food samples and all current tests are negative, Luo added.