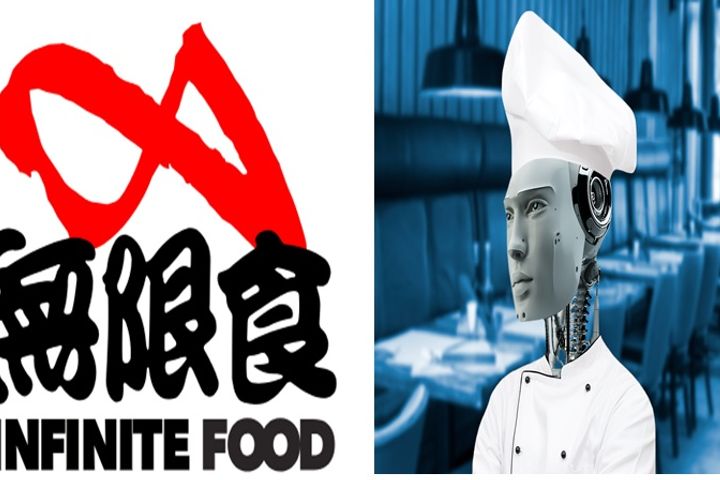 Australian Entrepreneur Reinvents Food in China in Service to the People

(Yicai Global) June 11 –- "Imagine having a professional chef who knows exactly how you like your food at your disposal 24-7, wherever you are." This is the vision of Walter Stanish, managing director of Shenzhen-based Infinite Food.

Stanish's modest proposal may turn the world's catering sector on its head, and usher in even far greater-reaching change than the fast-food model Ray A. Kroc pioneered in the 1950s.

Customers order and personalize directly from their smartphones. Typical preparation time is three minutes and the system can prepare four meals simultaneously. One custom hot meal can be prepared, packaged and sold every 45 seconds. Cold dishes are ready within 15 seconds.

The machine has a two-square meter footprint. Users order and personalize directly from their smartphones. Typical preparation time is three minutes and the system can prepare four meals simultaneously.

"Infinite Food utilizes robotics and artificial intelligence to provide hot, personalized, healthy meals to consumers at hundreds of locations around a city and in any human language, while respecting personal dietary needs and preferences," is how Stanish encapsulates his project. He is not just another whimsical dreamer come to the Middle Kingdom intent on selling a widget to each of its denizens, however. He has been in China 18 years and came here on a scholarship to study at Shanghai's East China Normal University.

"Every few years certain technological advances come together and open windows that allow for completely new types of products and services. The current environment of smartphone payment, robotics and artificial intelligence has created this opportunity to create a completely new segment in global food retail," Stanish said, enumerating the confluence of events that will enable the realization of his concept.

"Amongst developed nations, political and economic issues often take center stage in popular media. Technologists are encouraged to forge their own paths led merely by profit. In China, I see a country with a firm grasp on medium and long-term challenges and the potential to nurture and lead in world-changing technologies. That is why I invested in developing Infinite Food here in China," he says by way of explanation as to why he decided to set up shop in China. "American investors ask for feasibility studies and traction. Abstract visions of the future are called 'crystal-balling' in Silicon Valley, but in China we call them business plans and start executing. Chinese investors ask for vision and execution," he added.

On the topic of his undertaking's competitiveness within the catering sector, his take was, "In tier-one cities people spend an average of CNY40 on takeout orders. Our food will be half the price and twice as good and delivered 10 to 20 times faster. You always get exactly what you order, and the machine will always wash its hands before preparing your meal. It cooks with the scientific precision of a laboratory."

Infinite Foods just started its Series-A financing, which it will conclude by September.

Stanish sees his new vending units as being of universal application and appeal and believes he can dovetail his system with China's One Belt, One Road initiative to resurrect the nation's ancient trade routes. Stanish's service is moreover available in all languages.

A combination of such technologies creates the opportunity to create order-of-magnitude improvements in human systems. Infinite Food's technology will ease challenges to aged and infirm populations, while enhancing choice, availability, consistency and personalization of hot meals to the wider population. "Global populations are urbanizing and aging, while arable land is dwindling due to climate change, construction, water security issues and pollution. Food security has been identified as a national priority.

Combining robotics and artificial intelligence represents a substantial enhancement to existing food supply chains which are beset by fragmented and ad-hoc integration, quality control issues and the difficulty of validating modern agricultural chemical residues outside of a laboratory environment, Stanish notes. Automation does not mean his food-vending devices are one-size-fits-all, however. "The system supports religious and specialty diets, for example Halal, Kosher and vegetarian, and has full support for allergies, so if you're allergic to peanuts, it will never give you peanuts," he said.

Turning to the floodtide of problems associated with the current catering tableau, he said, "The current delivery model not only causes a lot of road accidents but is terrible for the environment, generating thousands of tons of non-degradable plastic garbage daily. Our model minimizes packaging, and what packaging we do use is 100-percent compostable bio-starch polymer that will disappear in a landfill within 14 days. It's a plastic created from corn husks and other agricultural waste. We also reward consumers who provide their own utensils to encourage responsible use of disposable implements. Non-biodegradable packaging for food delivery is a horrific environmental catastrophe that must be stopped as quickly as possible," he urged.

His service is also not entirely free of rivals. eDunFan in Shenzhen combines automated vending serves pre-prepared meals and drinks but falls short of really cooking to taste on demand, while Alibaba's Taocafe still uses a walk-in, sit-down restaurant with a vending space model. Competition also takes the form of reheating-only vending machine spaces such as Beijing's Fanmeimei, and Funbox with its locations throughout North China, Shenzhen-based Leshjuan and Sulaishi, Shanghai's Ludou, and Weisinong in Xi'an, but none have done any actual cooking in a machine yet.

"Humans face a bleak future if they are unable to consistently enhance agricultural outputs in the face of climate change, pollution and rising populations. Infinite Food's world-first technology developed under China's Made in 2025 initiative represents a true chance to supply nutritious, hot, personalized meals to Belt and Road populations with order-of-magnitude improvements in efficiency and waste reduction," Stanish related.

"There is nothing more important than sustaining life and Infinite Food's technology represents to me far more than a business: it is an immediate, global, moral imperative.