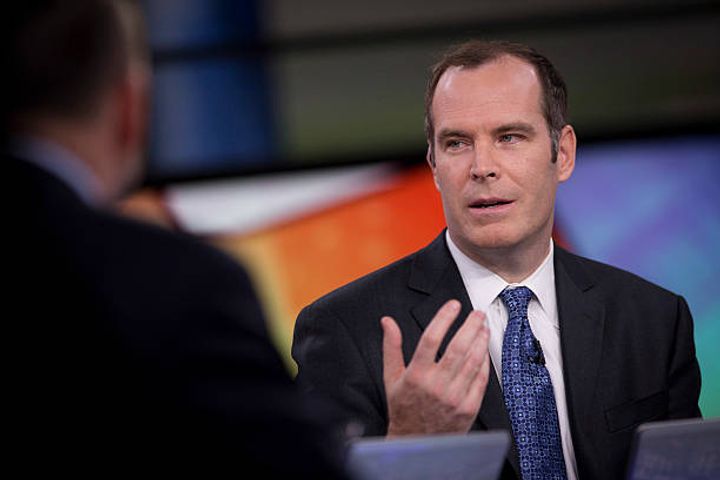 (Yicai Global) Nov. 22 -- Michael Gapen, chief US economist at Barclays in the US, said the consensus opinion is that the circumstances or factors for a US recession will probably be in place next year, or in 2021.

Gapen discussed the chances of a recession and trade relations between China and the US with Yicai Global at the Chinese Finance Association's 24th annual conference in New York on Nov. 11.

Extracts from his interview appear below.

Yicai Global: Do you think a recession is coming, since we've had almost a 10-year bull market?

Michael Gapen: What's clear to us, and others, is that the conditions for a recession are likely to be around in 2020. It doesn't mean we have one then, you'd have to think recession risk is rising in that timeframe -- 2020, maybe 2021. The expansion's gone on a long time, the unemployment rate is quite low, the Fed has already started to tighten, we've got some stimulus that should be providing transitory effects.

So now their goal is to say we think monetary policy should be restrictive. The path of travel is to higher rates than before. So the risk that people are seeing is that if fiscal stimulus is transitory, so as that wave of stimulus goes back, you are left with a situation where monetary situation is tight. This is an imprecise science. There is a risk of going a little bit too far.

History says turning the tap, the unemployment rate, up from below is a problem, so there aren't many soft landings to point to in the past. So the conditions around which recession might arise, most people think will be there in 2020. It doesn't mean we have one, but that's the concern.

YG: The Trump administration is trying to reach trade deals with other countries. For example, they have already rewritten the North American Free Trade Agreement between Canada, Mexico and the US. And they are talking with Europe, South Korea, and Japan to reach trade deals. What about China?

MG: Given what the administration wants, there is really no deal in China that satisfies that in the long run.

While on one hand I think the direction of travel is clear between the US-China relationship, so if I were counseling the president, I would say: 'Look, if you want to just pick a fight with China, just keep doing what you're doing. If you really want to change their behavior, if the goal is to honestly change their behavior, steer them in a different direction and kind of force them to make a different choice, then you can't do it alone.'

But I'm not sure Trump is the type to build allies. So I think he's divisive at home and he's divisive abroad. And I think you have to look at if you're a politician in Japan or Europe, do you want to be seen as forming an alliance with Trump against China. Or, would you kind of maybe agree with what the US is doing against China and be seen as an ally of this US administration.

Trump is not a person who's built around making friends. He literally has no friends. Allies are people who work for him and enemies are enemies. So I just don't think he is the type of person to go out and build that coalition of the willing. So that's why I think we view it as primarily US-China at this point. I just think we see off-ramps between trade issue between the US and everywhere else, but that doesn't mean we all get on the same page and present a united front.

YG: It seems that Trump has the upper hand in dealing with China because the US imports more and China exports more. Do you think a consensus can be reached? What would it take to achieve a compromise?

MG: My understanding is that the Chinese would make certain deals if they felt it would lower the tension in the room. But I'm not sure that they know what levers to pull. And if this is truly about long-term security issues and intellectual property and technology transfer, I'm not sure a deal on the trade balance is going to change that.

There is something that could be done on the trade balance front, either with a little more access for certain US firms or industries, or an agreement where China buys more of our exports in exchange for us differing tariffs. I think that deal is certainly possible. We may get something around that at the G20. But I don't think it changes that longer-run concern.

We haven't really prepared the US economy for the cost of this [China-US trade conflict]. The average voter doesn't really think that there's going to be cost to this, and we haven't built a coalition of other people who agree with us on this.

YG: The US and European economy are intertwined very closely. Europe benefits greatly from China's investment. The situation seems different there.

MG: Europe is much more interlinked with China and emerging markets than the US is. So when the US pulls back out of all the multilateral arrangements, it hurts everybody else through that same channel. We're linked globally, just not nearly as much as everybody else.

So the concern globally is that next year you may have global growth slowing down because China's slower than people think, US fiscal stimulus is waiting. And then Europe and emerging markets look at that and say 'well we're going to slow down too.'  So that's one of the main concerns that right now things are pretty good in the US, it feels good.

But we also talk about a Wile E. Coyote moment. It's a children's cartoon about a coyote that chases a bird. In virtually every episode at one point he is standing out on a cliff and then the cliff falls. Things are great and then all of a sudden you look down and there's nothing there. If China decelerates faster than people expect and US fiscal stimulus ebbs off at the same time, then that's a larger portion of global economy slowing, and Europe and emerging markets are dependent on that.

But this is the friction that the US wants to be, and historically has been, the leader in the post-World War II US order in setting up this multilateral framework. But everybody else is more integrated into that framework than is the US. So if we pull out it leaves everybody else falling around.

YG: We already have so many crises, geopolitical risks. The world seems pretty dark right now.

MG: All of these things that were set up after World War II are fraying, and the Western democracies are fragile at the moment. So the rise of populism, nativism, and anti-immigration, and what we would call nimbyism (not-in-my-back-yard), that's a problem.

Europe is struggling with the same political tensions, the UK obviously is as well. It looks like the post-Word War II order is breaking apart and we could get more regional alliances. China is well placed to do well in that kind of world, given its industrial policies.