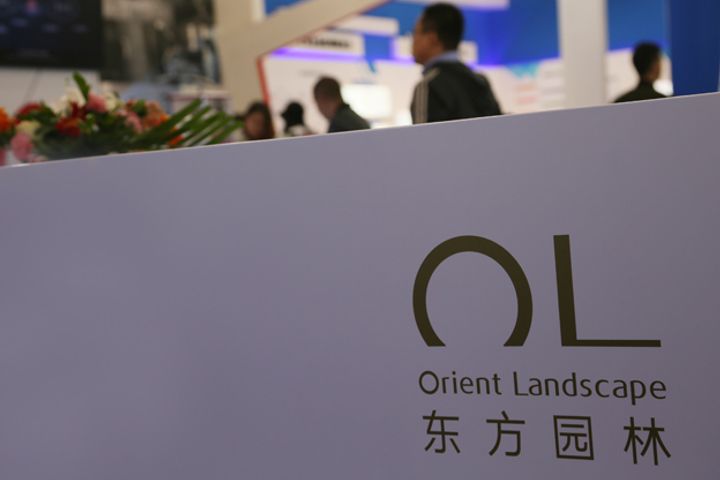 (Yicai Global) Nov. 2 -- Shares in China's Orient Landscape & Development soared by the 10 percent limit today after chairwoman He Qiaonv penned a deal with a state-backed fund to sell up to 5 percent of the company.

The Beijing-based firm's stock [SHE:002310] closed at CNY8.89 (USD1.29), marking its biggest gain in about 10 months after it falling by more than half over the course of this year.

He and her husband, Tang Kai, penned an agreement with the Yingrun Huimin fund yesterday, under which the couple sell off some of their pledged shares and pump CNY1.2 billion (USD170 million) of liquidity into the company, based on its current market cap of nearly CNY24 billion. The parties will iron out the details in a separate agreement.

Pledging shares is a popular method for raising money among Chinese entrepreneurs, but the associated problems have come to light this year as the domestic stock markets have plunged to multi-year lows, pushing the value of many shares to a point at which creditors can force pledgers to liquidate their holdings.

He and Tang have pledged some 1.1 billion of their shares in concert, about 83 percent of their combined holdings or a 49.4 percent stake in Orient. The firm's ongoing decline, which was accelerated in May after its plans to raise CNY1 billion in bonds amassed just CNY50 million (USD7.3 million) in funding, knocked the stock below the forced sale mark last month, prompting the Beijing branch of the securities watchdog to step in and discourage lenders from forcing liquidation.

The local unit of the China Securities Regulatory Commission met with He and 23 Orient creditors on Oct. 16, asking the lenders not to force He and Tang to sell their shares but to hang tight and let them try to get the company back on track. He told the creditors at the meeting that she intends to repay her debts and proposed a specific settlement plan.