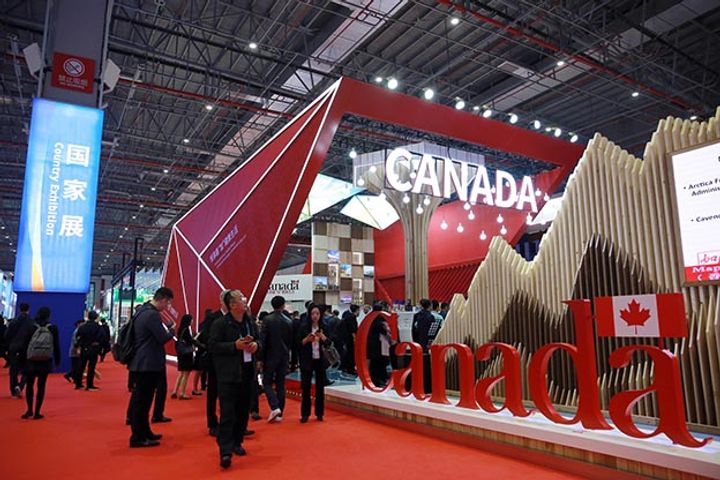 (Yicai Global) Nov. 9 -- Yesterday was the fourth day of the first China International Import Expo, but the luster of the Canadian Pavilion has not dimmed, Yicai Global found.

"Today is British Columbia Day in the Canadian Pavilion. Since opening on Nov. 6, exhibits and firms from one province of Canada have gone on display each day. Nov. 6 was Ontario Day, Nov. 7 was Quebec Day, today is BC Day and tomorrow will be Atlantic Provinces Day. Different exhibits have displayed at the pavilion each day featuring products from the province of the day," Yao Jing, a staffer from Canada's consulate in Shanghai, told Yicai Global, noting that Deputy Consul-General Jean-Christian Brillant has also been present each day.

It is a great pleasure for Canada to be invited as a guest country to the CIIE and Canada gladly accepted the invitation. China and Canada have a very strong link, which is the strongest in their history, Jean-Christian Brillant told Yicai Global.

The CIIE helped them attract not only Chinese exhibitors, but also exhibitors from all over the world, Canadian firms at the CIIE told Yicai Global.

Canada hopes the CIIE will bring many opportunities to its agricultural and food firms. In fact, China and Canada have established strong relationships in these sectors. Many Canadian firms have exported agricultural products to China, such as beef, blueberries, cherries and seafood which are becoming more and more popular in China, said Jean-Christian Brillant, adding that the ranks of Chinese consumers, the middle-class in particular, are expanding rapidly and they seek high-quality, safe, reliable and healthy products, so it is hoped that China and Canada will cooperate in more sectors in addition to agricultural products.

China is Canada's second-largest single country trade partner. The two-way trade volume between them last year was close to CAD67.6 billion (USD51.3 billion), making 6 percent of Canada's total merchandise trade. The two-way trade in services is close to CAD6.2 billion. Canada is also enhancing its investment relationship with China, with two-way direct investment rising to nearly CAD21.7 billion last year from CAD16 billion in 2010. The two have also designated this year as China-Canada Tourism Year, per information from the Canadian Pavilion.

Many purchasing groups at the CIIE had great interest in buying and helped the exhibitors attract more attention, Jeannie Cheng, President of the Canada International Trade Promotion Society, told Yicai Global, and said she would share today's press conference with firms back in BC. She thinks more firms will participate in the expo next year.

Many Canadian firms can also learn about other countries' trade measures at the CIIE, which will help business circles persuade the Canadian government to release more favorable trade measures, she added.

Hu Cuifen, vice president of Beijing-based Mozen Fashion's Canadian unit, attended the press conference for the BC Day. "We attracted a lot of attention at the CIIE," she said with glee. "Many exhibitors took pictures at our booth, and we lured not only Chinese, but also foreign exhibitors who signed orders with us.