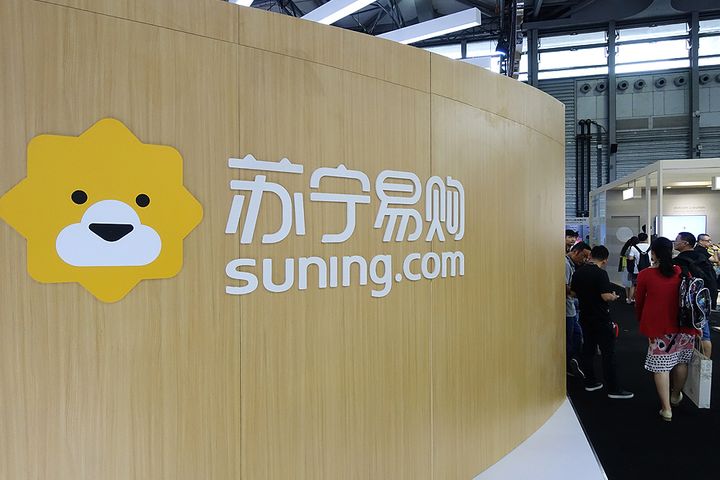 (Yicai Global) Jan. 23 -- Chinese e-commerce retailer Suning.Com's net profit attributable to shareholders reached about CNY11 billion (USD1.6 billion) to CNY11.2 billion last year, down about 16 to 17.5 percent annually, but the Carrefour China branch of the eponymous French supermarket chain in which Suning holds a controlling stake turned that deficit into a profit in the fourth quarter, the online seller announced yesterday.

The earlier loss stemmed from the Nanjing-based online platform's sale of a portion of the shares it owned in tech titan Alibaba Group Holding in 2018.

Carrefour China declared its first earnings figures after the takeover at Suning's annual award ceremony on Jan. 21, revealing greatly improved fourth-quarter profit and operating cash flows over the same period in 2018 in a new high in the last seven years.

The 210 hypermarkets and 24 Easy-branded convenience stores that Carrefour China operates, and its network of outlets and positioning in China's first-and second-tier cities are integrating with Suning.Com's supply chains.

Carrefour China also took part in Suning's promotional events on China's Nov. 11 'Double 11 Shopping Carnival' when its sales from that Black Friday-style event tallied about CNY3.1 billion, surging by 43 percent from 2018. It directly purchased Nongfu Spring's '17.5 degree centigrade' brand oranges, and cherries from Chile jointly with a Suning unit that focuses on fast moving consumer goods, and sold them at its stores and Suning supermarkets and its Suning Xiaodian and Suxiansheng community convenience stores, which are the e-retail giant's version of Alibaba's Hema Fresh-like shops and simultaneously on other online and offline channels.

Suning also set the goal of opening 300 Carrefour stores in first-, second- and third-tier cities in the next five years. Its business formats such as its Honghaizi stores selling maternal and baby products, those for sports-related items, department stores and cinemas will also integrate with and open in Carrefour to build one-stop community lifestyle centers that combine products, services, experience and entertainment.

The Nanjing-based company bought an 80 percent stake in Carrefour China and became its controlling shareholder for CNY4.8 billion in June. It completed its formal acquisition on Sept. 27. Boulogne-Billancourt-based Carrefour entered China in 1995 and expanded to 22 provinces with 210 supermarkets, 24 convenience stores and six warehouses. Its loss of control followed a long period of troubled Chinese operations for the former top foreign supermarket chain in the country as it failed to adapt to the rise of e-commerce and its sales correspondingly slipped.