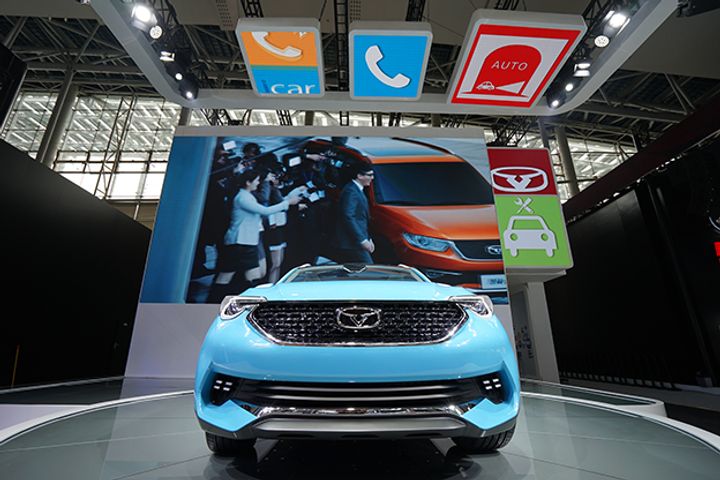 (Yicai Global) Dec. 20 -- Chery Automobile Co. has recently sold a 25 percent stake in Qoros Automotive Co., and the deal was followed by the introduction of a new investor for another subsidiary, Wuhu Kaiyi Motors Co. (Cowin Auto), as the Chinese carmaker seems set to carry through corporate downsizing this time.

The signing ceremony for the 'Agreement on Cowin Auto's Relocation to Yibin was held at the national economic and technology development district in Lingang, Yibin in China's southwestern Sichuan province on Dec. 18, the Yibin government reported on its official website (ybxww.com).

As part of Chery's strategic drive to axe nonessential brands, Cowin was established by more than 200 members of the Chery A15 project team led by one of Chery's co-founders, Lu Jianhui, in the Jiangbei industry park in late 2013. Its initial registered capital was CNY2 billion. That figure rose to CNY3.5 billion, per the statement by the Yibin government, from whom the additional CNY1.5 billion came, a source at Chery Auto confirmed with Yicai Global.

It is still unclear as to exactly how many shares the new investor will get for the capital contribution. Judging by the firm's current capital structure, Chery is still its largest shareholder.

"This is only provisional, and some models will be bundled for sale in future. The Yibin [government] will buy more shares, perhaps 100 percent," a source told Yicai Global. Despite the change in registered address, Cowin will not relocate immediately, the source added. "Essentially, Yibin wants to have a two-year transition, and relocation will be carried out in steps thereafter. The management team has remained unchanged, but there might be future changes."

Cowin has always found itself in an awkward spot since its inception. It is an independent brand, but has to rely on Chery for product resources and production capacity. Its products are priced at around CNY100,000, a market that overlaps with Chery's. Even worse, Cowin is not allowed to go toe-to-toe with the parent company in this market.

The firm coined the slogan 'making connected cars for young people.' It adopts an asset-light model characterized by crowdsourcing, whereby car buyers themselves are involved in product design, with the products are then manufactured using Chery's production lines, as it hopes to stay afloat. This highly creative strategy has been thwarted by the traditional industry framework, however.

Cowin sold 24,000 cars in 2015, beating its yearly target. It fell short of the sales target of 62,000 units by about 19,000 the following year. Rumor had it that Chery wanted to bring Cowin back into its own brand system, and a management reshuffle ensued at the subsidiary.

The parent company itself is suffering from dwindling sales and earnings and a funding shortage, so it may not be able to take the unit back and revitalize its assets and resources. Finding a white knight bidder is thus obviously a very attractive alternative.

The Yibin government has always eyed the auto market. It struck an investment agreement with Chery Auto, Quantum, an affiliate of Qoros' foreign shareholder Kenon Holdings, and Qoros Automotive Co. on April 6, pledging CNY5.5 billion to build a plant in the city whose production capacity was projected at 500,000 cars a year, including 200,000 new-energy vehicles. The output was estimated to be CNY85 billion per year. Unfortunately, the plan was shelved in the end after Qoros brought in a new investor.

After Cowin relocates to Yibin, the new company will be licensed to manufacture traditional and new-energy vehicles, and the annual output value at the new plant is projected to be over CNY12 billion, per the agreement between Chery and the Yibin government. Further, it will boost sales in related local businesses by at least CNY28 billion and create more than 1,500 new jobs.

Yibin government's bid for Qoros was intended to pave the way for Yibin Wuliangye Co. [SHE: 000858], a premier Chinese liquor brand, to enter the auto industry. It is still unknown whether the distiller is involved in Cowin's relocation, the source at Chery said.