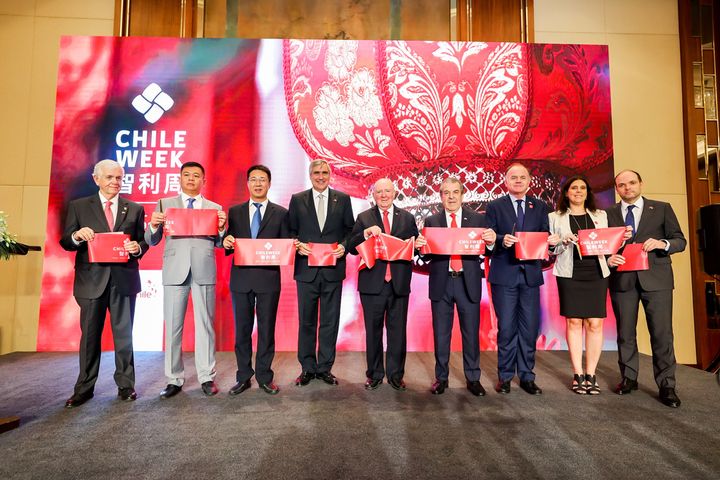 (Yicai Global) Sept. 3 -- A delegation led by Rodrigo Yáñez, Chile's vice-minister for trade, set out the progress made in China-Chilean trade and investment at the 5th Annual Chile Week in Shanghai this week and said the South American country wants to expand its e-commerce exports of agricultural produce to China, including fresh fruits, wine and meat.

Chile's location in the southern hemisphere means Chinese consumers can enjoy a range of its quality fresh summer fruits -- avocados, blueberries, cherries, grapes, kiwifruit, stone fruit, apples and pears -- in the middle of a Chinese winter.

"With USD1.4 billion in shipments in 2018, up more than 100 times since 2006, Chile was China's top supplier of imported fresh fruit by value last year," Wang Wei, the general manager of Guangzhou Zhanhui Trading, said in his opening remarks at the three-day event which ended today. "In fact, last year, 20 percent of China's imported fruit supply came from Chile."

A Taste for Pork

This is not to ignore the rising popularity of other Chilean foods in China, such as pork, king crab, salmon and trout. China's imports of Chilean pork jumped 87.5 percent in the first half from a year earlier to USD90 million. They are expected to reach USD220 million for the entire year, more than double what they were in 2018.

Many small and medium-sized companies can also participate in international business and reach consumers around the world after the introduction of Chinese e-commerce in Chile, and Chile will continuously learn logistics and convenient electronic payment from China, Yáñez said.

He hopes that firms in the two countries can cooperate in the shared-bike and electric vehicle sectors with Chile's abundant supply of lithium and nickel, two key raw materials used in batteries for new energy vehicles.

Chilean Ambassador H.E. Luis Schmidt said bilateral trade surged more than fourfold from the start of the China-Chile Free Trade Agreement in 2006 until last year when it reached USD42.9 billion.

Many Chilean exporters shared their enthusiasm for the Chinese market with Yicai Global at the Annual Chile Week. "We'll also attend the China International Import Expo to show more types of products and expand more sales channels, both offline and online," said a representative of a fruit exporter.