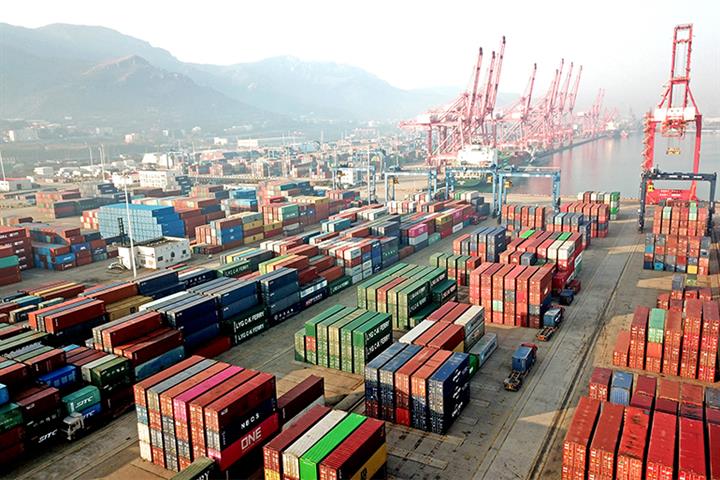 US Contributed Most to China’s Record USD676.4 Billion Trade Surplus in 2021

(Yicai Global) Jan. 14 -- The United States accounted for more than half of China’s trade surplus last year, which hit a record high of USD676.4 billion as exports surged during the global pandemic.

It was the biggest surplus since records began in 1950, after climbing 26.5 percent from a year earlier, data from the General Administration of Customs showed today. Exports totaled USD3.36 trillion and imports USD2.69 trillion, up about 30 percent each.

The gains were fueled by China’s soaring domestic economy, global economic recovery, as well as a series of measures that the country took to stabilize the market and guarantee foreign supply chains, GAC spokesperson Li Kuiwen said.

For example, laptops, tablets, and household appliances maintained double-digit growth last year, after also gaining quickly in 2020, Li said. Moreover, exports of medical supplies and drugs more than doubled, contributing to the global fight against the Covid-19 pandemic, he added.

But the pace of gains may slow this year due to uncertainties, instability, and imbalances, Li said, adding that China is burdened with shrinking domestic demand, supply shocks, and weakening expectations as external conditions become more complicated.

These factors could put pressure on China's foreign trade, along with last year’s relatively high base and slowing overseas demand this year, he said.

The Association of Southeast Asian Nations retained its status as China's most important trade partner last year. Trade between the two rose 28 percent to USD878.2 billion. The European Union was second at USD828.1 billion, also with a 28 percent gain. Japan came fourth and South Korea was fifth.