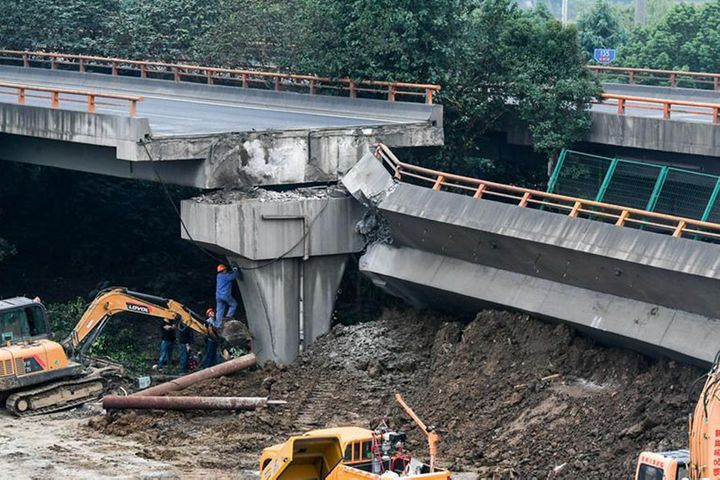 (Yicai Global) Oct. 11 -- Single-column bridges such as the one that toppled over in China yesterday killing three people and injuring two more are liable to suffer misfortune, according to experts.

The absence of regulations to check the lateral stability of such bridges can lead to potential safety hazards, they told Yicai Global. The main triggers are likely to be vehicle load, bearing settlement, structural form and temperature.

Yesterday's tragedy happened on a flyover of the 312 National Highway in Wuxi, a lakeside city in eastern Jiangsu province. Preliminary analysis suggests it was caused by an overloaded transport vehicle. The overpass appears to be a single-column bridge, photos of the accident site showed.

But no problems were found in the Wuxi bridge during routine inspections, which suggests that hazards cannot be eliminated by relying solely on regular checks. Further assessment is necessary.

Single-column bridges are widely used in China, according to Xu Hanzheng, an associate professor at Chang'an University's school of highways. The design saves space and improves the layout of the lower mechanism, visibility and appearance. The overload of heavy-duty vehicles is the main reason for these bridges collapsing, and their safety performance is reduced when the load is 1.6 times.

Ultra-heavy standard trailers weighing 100 tons are advised to run slowly along the middle lane, lowering the possibility of a bridge overturning, Xu said.

Frequent collapses of bridges that have single pillars as supports has caught the attention of engineers in recent years. Such bridges have poor lateral stability and can overturn, Peng Shikui and Luo Chuanyun from the China University of Mining and Technology said in Analysis of Single-Column Bridges' Stability Against Overturning, a paper submitted at an academic conference early this year.

The School of Transportation of Southeast University's Wan Shicheng and Huang Qiao also wrote in the Journal of China and Foreign Highway in 2015 that single-pier spans have low torsion resistance and heavy trucks with unbalanced loads can easily cause them to topple over, causing significant loss of life and property.

Research on the problem is in its infancy in China, and the computational theory, design method and related specification requirements are not yet mature, the article added. Other countries have strict restrictions on vehicle loads, so there are few research papers on the matter, leaving Chinese scholars with little to go on, it added.

The earliest known collapse of a single-column bridge in China happened on Oct. 23, 2007. An overpass in Baotou city toppled when three hefty trucks ran from south to north, hitting a railway line underneath.