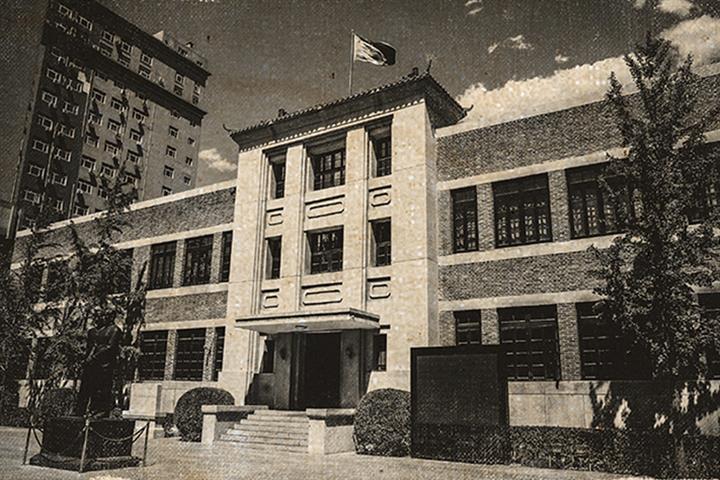 (Yicai Global) June 28 -- The People’s Bank of China, the country’s central bank, used to be located at No. 55 North Zhonghua Street, Shijiazhuang city in Hebei province.

The steel-gray two-story building carried the arduous history of the nation’s financial sector and opened a new era for the sector in new China.

Preparations for setting up the PBOC began in full swing in the late 1940s amid the civil war with the Kuomintang, with the continuous expansion of the liberated areas and the gradual unification of financial and economic work by the Communist Party of China.

A number of names for the bank were discussed at the time such as the Union Bank or the Liberation Bank.

“‘Union Bank’ referred to six liberated areas that were combined into one, and ‘Liberation Bank’ was similar to the name of a commercial bank,” Ma Lin, an historian of finance and former head of the PBOC’s financial history compilation group, told Yicai Global. “They did not think about calling it a ‘central bank’, which was completely the same as that of the Kuomintang government.”

‘The People’s Bank of China’

“Can we call it the People’s Bank of China, just like people now call us the People’s Government?,” was the proposal from He Songting, then deputy manager of the Shanxi-Chahar-Hebei Border Region Bank at the time.

His suggestion won favor, with the Party Central Committee believing the name meant the bank belonged to the people while also reflecting its national status in new China.

The People’s Bank of China was duly established in Shijiazhuang in December 1948. It moved to Beijing in February 1949.

After the founding of new China, facing the chaotic financial system left behind by the Kuomintang government, the PBOC issued renminbi, purged the ‘gold yuan’ notes in circulation, and adopted an approach to savings by which funds could be deposited and withdrawn physically, which built up people’s confidence in the new currency.

When the People’s Bank of China was being set up, the idea was to have ‘five banks and one company,’ with the the PBOC as the central bank and four others at the next level -- the Foreign Exchange Bank, the Industrial Bank, the Savings Bank and Cooperative Bank along with one company, the People’s Insurance Company of China.

But because of a lack of manpower and material resources at the time, the idea did not come to fruition, Ma said. The PBOC had the rudimentary form of a unified central bank. It was no longer a single central bank though it marked the beginning of China’s financial sector.

As a national financial management and currency issuing agency, the PBOC was responsible until 1978 for organizing and regulating currency circulation, operating credit businesses in a unified manner, and conducting comprehensive financial supervision and services for large-scale economic development.

It played an important role in stabilizing the value of the renminbi and helping revive and develop the national economy.