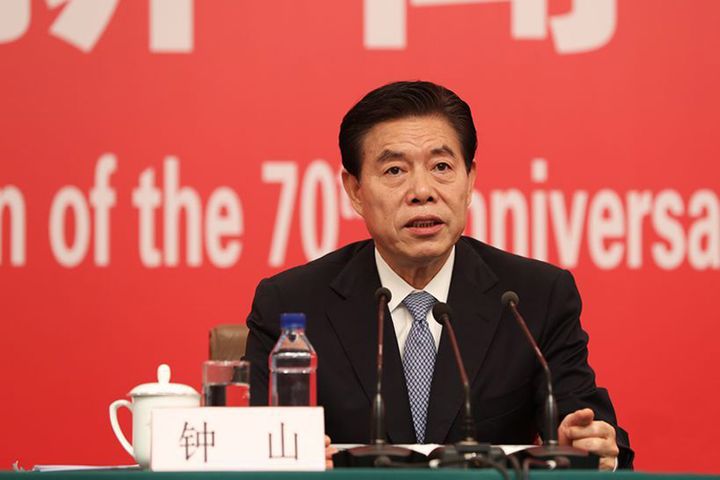 From the initial establishment of New China until 2018, the society's retail sales of consumption goods have risen to CNY38 trillion (USD5.3 trillion) from CNY30 billion to make it the world's second-largest consumption market. The country's foreign trade has climbed to USD4.6 trillion from USD1.1 billion as China has become the largest country in the world in goods trade.

The country attracted USD138.3 billion in foreign investment last year, making it the globe's second-largest destination for overseas capital. A total of USD2.1 trillion of foreign capital was utilized up to the end of last year, which saw 960,000 foreign-funded companies operating in the country. Overseas-invested firms have contributed nearly 20 percent of the country's tax revenue and played a key part in vitalizing innovation and upgrading industry, Zhong noted.

China's share of exports along the Belt and Road countries has reached 30.1 percent, and its accumulated investment has topped USD100 billion. Foreign-contracted projects exceeded USD720 billion, and investment in China by countries along the One Belt, One Road route has reached USD48 billion.

China has signed five free trade agreements with 13 countries along the Belt and Road and has also pushed the Regional Comprehensive Economic Partnership negotiations into a critical phase and substantively concluded talks on economic and trade cooperation agreements with the Eurasian Economic Union.

The country's online retail sales amounted to CNY9 trillion last year, making up nearly one-fifth of the total. The contribution rate of consumption to economic growth rose to 76.2 percent last year from 50 percent in 2013.

China imports more than USD2 trillion in goods each year. Preparations for the second China International Import Expo are progressing smoothly, Zhong said. The 2nd Expo will run in Shanghai from Nov. 5 to 10, and the exhibition area will reach 360,000 square meters, compared with the first expo's 300,000, and more than 250 Fortune 500 companies and leading world enterprises already participating. The number of exhibitors and purchasers has greatly exceeded the first fair's, and the number of overseas buyers above all has risen sharply.

China will promote the stabilization of foreign trade policies in future, optimize its market layout, focus on the Belt and Road, and encourage enterprises to go global. It will also enhance science and technology, develop innovation, expand imports and vigorously develop the service trade, Zhong pledged.