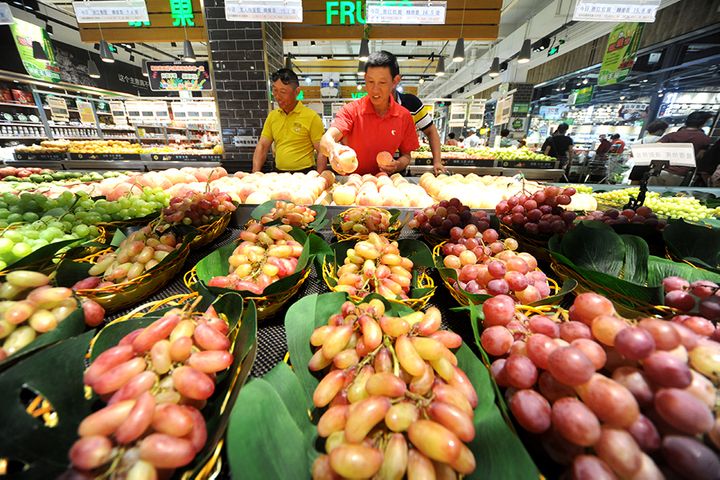 (Yicai Global) Aug. 9 -- The fastest increase in China's consumer price inflation since last March was mainly due to the impact of the supply cycle and will not hinder monetary policy maker's room for maneuver, according to analysts.

The consumer price index jumped 2.8 percent in July from a year earlier, according to data released by the National Bureau of Statistics today. The producer price index fell 0.3 percent from a year ago, the first decline since August 2016.

In the medium to long term, the fruit business adjusts quickly so fruit prices will not stoke inflation, said Li Chao, chief macro researcher at Huatai Securities. Gains in fruit prices are expected to gradually ease in summer with seasonal products such as watermelons, grapes, autumn apples and pears hitting the market.

Pig breeding in the country has been hit by an epidemic of African swine fever. Local authorities have launched measures to buoy hog breeding, ensure pork supply, and ease price volatility. The increase in pork prices will slow as imports take up the slack and consumers eat alternatives like beef, mutton and chicken.

The CPI will probably rise because it takes time to rear pigs, Liu said, adding that inflationary pressures mainly come from the supply cycle and will not constrain monetary policy.

The drop in producer inflation was centered in the industrial sector, with large declines in upstream coal mining, oil and gas exploration and other industries, Liu said. Leading indicators show coal and steel prices are still headed lower. Liu expects the PPI to fall further.

The cost of materials fell 0.7 percent in July, 0.4 point faster over June while the price of raw materials rose 0.8 percent, 0.1 point slower than in June.

Structural adjustments can be made to improve the financing environment for small and micro businesses by using a wealth of monetary policy adjustment tools, Zhang added. Promoting a triangular framework of mutual support between supply, demand and the nation's financial system will be a new policy direction, Zhang said.