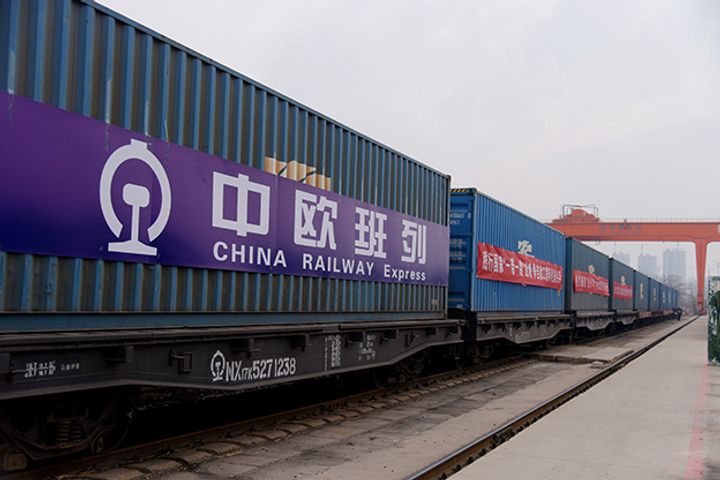 The country's trade in goods with the continent has doubled every year. The service not only contributes to the growth of bilateral trade, but also brings employment opportunities and investment to the other end of the tracks, above all its main terminus in Germany.

The Duisburg port is China-Europe freight trains' most important station. NRW contributes 13 percent of Germany's exports to China, as well as 26 percent of imports, and is an important European hub of China's Belt and Road Initiative, Xu Ju, Nanjing-based chief executive representative of the state's Economic Development Agency, told Yicai Global in an interview.

Duisburg was an industrial city famous for coal mines and steel, but it lost 20 percent of its population as its heavy industry gradually withered, and its jobless rate once topped 10 percent, much higher than the nation's average.

All this changed, however, with the arrival of the cargo trains from China.

Major Chinese cities had sent nearly 13,000 full freight trains to Europe by the end of last year, 80 percent of which ended at Duisburg. Now 35 to 40 shuttle between the western German municipality and dozens of Chinese cities every week, and that number is expected to pick up further steam in future, Duisburg port statistics show.

The trains have created more than 6,000 jobs in the city's logistics sector, according to city government figures.

China-made electronic equipment and textiles can be shipped to Europe within two weeks through this multi-dimensional international logistics line, via which European consumer products like wine and ketchup also wind up on sale in Chinese supermarkets.

Rail transport is faster than ocean freight and cheaper than air cargo and is suitable for transporting non-perishable goods, and other whose prices are only affected by transport time to a limited degree, Jin Xiaofei, director and deputy general manager of state-backed Suzhou Newcity Investment and Development, said in an interview with Yicai Global.

Suzhou had sent 481 freight trains to Europe as of the end of last year, Jin said, with their cargoes worth about USD4 billion, and their volumes swiftly rising.

Europe-bound freight trains from Suzhou mainly export electronic products from China's Jiangsu province and eastern and southern regions to Germany, Poland and the Czech Republic, and they import equipment, components and auto parts, mainly from Germany.

Suzhou-departing trains arrive in Germany's Hamburg and Duisburg in 19 days. They can also distribute goods to Central and Eastern European Countries such as the Czech Republic, Hungary, Slovakia and Austria after arriving in Warsaw, Poland, and continue to conduit goods to the Western European countries of Germany, Denmark, the Netherlands, Belgium, France and Italy after arriving in Hamburg and Duisburg, Jin told Yicai Global.

The number of Chinese stationed in Duisburg has doubled with the rising frequency of goods train runs, with nearly a hundred Chinese companies active in logistics, real estate and cross-border e-commerce setting up shop among the town's half-million residents, German media reported.

Zhu Zhe, general manager of Wenzhou Baoheng Auto Parts, plans to acquire or invest in small German auto parts plants, which can expand his company's vast international market, he said in an interview with Yicai Global. "German manufacturing technology deserves our study; investing in Germany is my medium- and long-term goal," he said.

Xu cited some successful investment case studies to Yicai Global, e.g. Nanjing Gaojing Transmission Equipment Manufacturing Group decided to conduct a green field -- construction of brand-new plants or other facilities from the ground up -- investment in Germany to develop novel technologies and expand its European market.

It ultimately settled on Duisburg out of 10 candidate cities because of its developed transport and logistics infrastructure, concentrated research and development institutions, and related industrial clusters.

NRW, where Duisburg and the greater Ruhr manufacturing region lie, is the most popular German investment destination for Chinese companies, with over 1,200 having invested there -- 25 percent of the Chinese companies in Germany. NRW is home to one-fourth of the more than 100,000 Chinese living in Germany and is where many well-known Chinese firms have set up their German headquarters. For example, Huawei's German center is in Düsseldorf, the capital of NRW, Xu told Yicai Global.

Jobs spawned by Chinese companies' investment in NRW made up 10 percent of all those created by new foreign investment, according to data from the NRW Economic Development Agency.

China's spending on European ventures last year was lower than in 2017 since the EU has tightened its review of foreign companies' investment, mergers and acquisitions in local areas, but investment in Germany grew, nonetheless.

China's direct investment in 28 EU countries fell by 40 percent to EUR17.3 billion (USD19.5 billion) last year, while in Germany it climbed by EUR400 million (USD452 million) over 2017 to EUR2.1 billion, per a report by the Berlin-based Mercator Institute for China Studies and New York-headquartered global trend analytics firm Rhodium Group.