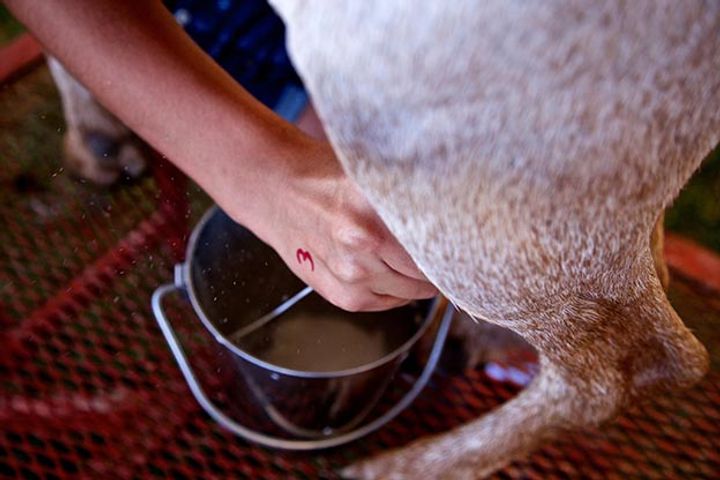 (Yicai Global) May 10 -- Goat milk prices have risen substantially in China in three months, with the procurement price nearly doubling in main producing areas, pointing to strong demand, as well as underdevelopment in the upstream pastoral sector.

The purchase price for goat milk has risen to CNY10 (USD1.57) per kilogram from CNY5 to CNY5.5 in northwestern Shaanxi province, a main goat milk production area in China, since this year's Spring Festival, Yicai Global has learned.

"The latest round of goat milk price rises has lasted over three months," the general manager of a dairy goat company in Shaanxi who wished to remain anonymous, told Yicai Global. "Signs of price rises were already emerging before Spring Festival. The procurement price for goat milk has kept rising since then, going as high as CNY9.7 per kilogram."

"The buying price of goat milk has remained stubbornly high," Zhao Hongwei, director of marketing at Shaanxi Hongxing Meiling Dairy Co., told Yicai Global. "Though the purchase price has fallen slightly from its peak, it is still hovering around CNY9 per kilogram."

Prices had remained steadily between CNY5 and CNY6 per kilogram in recent years, with this the first time they have reached such lofty levels, the unidentified general manager told Yicai Global.

A severe lack of supply is the main cause of the persistently high prices, and this has prompted companies and milk stations to siphon up goat milk, insiders said, adding that prices rise by the day at some milk stations, leading to vicious competition. But the goat milk reservoir still falls short of processors' demand, all sources said.

"Goat milk is mainly used to make goat milk powder for babies. On the one hand, inventories have been relatively low with firms. On the other, as the government implements its milk powder formula registration policy, firms have begun to snap up market share by pumping up their dairy product supply, thus concentrating demand for goat milk," Wang Dingmian, ex-councilor of the Dairy Association of China, told Yicai Global.

The total daily output of fresh goat milk is about 600 tons in central Shaanxi, which is just barely enough to meet Hongxing Meiling's demand, a company representative told media. At least eight other local processing plants with a capacity of 300 tons each mean local dairy goat numbers need to more than quadruple to meet the raw material demand of so many firms, he added.

The price of goat milk is unlikely to fall in the short term, Song Liang, an independent dairy analyst, told Yicai Global, adding that he does not rule out the possibility that the price may further increase by October when the production season ends.

Rapid increases in prices are not good for the business. Goat milk is still mainly used to make milk powder for babies. Imported goat milk baby formula has poured into the Chinese market since last year, Song said. This year the country may see an oversupply of goat milk powder, whose cost has not greatly risen in the international market.

This has put milk powder makers in Shaanxi that use domestic goat milk under heavy cost pressure, Song said, adding that they may bear the brunt of imports just as they were hit by imported cow milk powder.

China's domestic infant formula market is still reeling from the effects of a scandal in 2008 when melamine-tainted milk powder formula produced by Sanlu Group Co. killed six babies and hurt 300,000, per a New York Times report of Aug. 7, 2013, with several company executives sentenced to long prison terms. Imported formula became so popular that in 2013 Hong Kong had to impose a two-can limit on mainlanders taking formula outside the special administrative region, with smugglers subject to fines of up to HKD2 million (USD 255,000) and seven-year prison sentences.

"We do not trust domestic brands. If you have the choice, you buy foreign ones," said Yang Lianglin, a taxi driver in southeastern Guangdong province who travels to Macau each month to buy milk for his baby, Hong Kong Economic Journal reported Dec. 18.