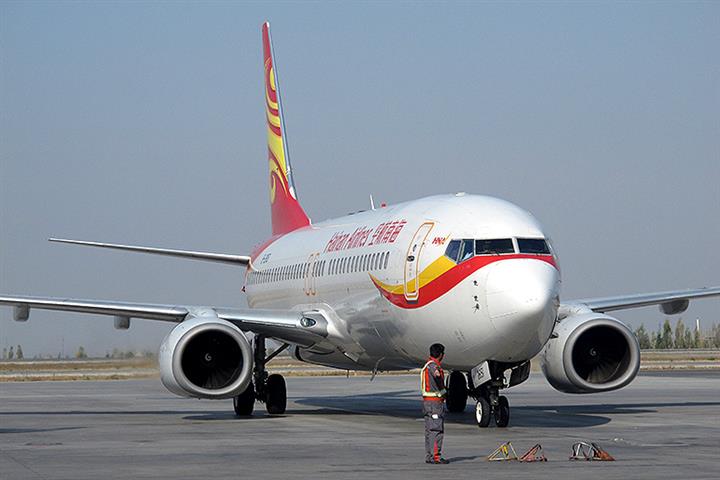 (Yicai Global) Aug. 12 -- Shares of Hainan Airlines Holding surged after the loss-making Chinese airline said it plans to raise no more than CNY10.9 billion (USD1.6 billion) from a company under its controlling shareholder, Fangda Group Industrial, to supplement its working capital.

Hainan Airlines’ stock price [SHA: 600221] surged by 5 percent to close at CNY1.45 (20 US cents), the second day of rising by the exchange-imposed daily limit for companies at risk of delisting. The shares are still down by almost a quarter this year.

The aviation company intends to issue nearly 10 billion shares to Hanwei Investment, which is indirectly controlled by Fangda, via private placement, the Haikou-based aviation giant said in a statement yesterday. The newly issued shares are close to 30 percent of its total share capital before the issuance.

The price per share is CNY1.09, representing a discount of nearly 24 percent compared with the closing price yesterday.

The latest private placement indicates the confidence of the controlling shareholder in Hainan Airlines, the firm said. Consequently, the airline's capital structure has also been effectively improved, it added.

This is the first financing for Hainan Airlines after its bankruptcy and restructuring. Before this, the latest and the fourth private placement since it went public in 1999 was in September 2016, when it raised CNY16.4 billion.

Fangda will hold a 42.5 percent stake in Hainan Airlines after the new injection, up from 25.3 percent. The Liaoning province-based conglomerate acquired Hainan Airlines at a cost of CNY38 billion and a promise of CNY3 billion in risk relief funds in December 2021. The price per share was around CNY3.

The aviation giant has been losing money since its reorganization amid the Covid-19 pandemic. In the first half, Hainan Airlines expects to record a loss between CNY11.95 billion and CNY12.96 billion, exceeding the new injection.

The company was recently fined for violations in information disclosure before its reorganization. The China Securities Regulatory Commission said yesterday that Hainan Airlines needs to pay a fine of CNY3 million (USD445,200) while a total of 11 executives who signed its earnings reports from 2018 to 2020 will also be punished as they failed to disclose related-party transactions and guarantees. Four senior executives, including a vice president and several directors, announced their resignations yesterday.