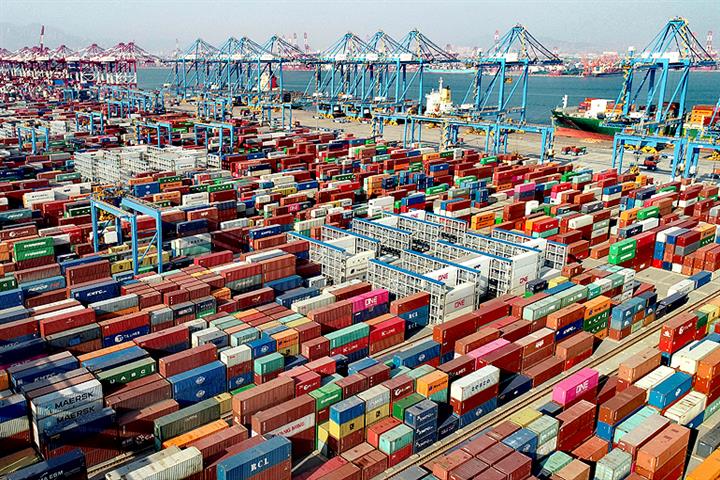 (Yicai Global) March 8 -- China’s total imports and exports surged 41.2 percent in dollar terms in the first two months of the year from the same period last year, buoyed by a strong rebound in export demand as major economies recover from the pandemic, continued growth in the domestic economy and last year’s low baseline, according to the latest data.

China’s imports and exports amounted to USD834.5 billion in January and February, logging a trade surplus of USD103.2 billion, the General Administration of Customs said yesterday. Exports soared by 60.6 percent to USD468.9 billion and imports rose by 22.2 percent to USD365.6 billion.

This is a big turnaround from the 9.7 percent contraction in imports and exports over the same period last year, creating a USD7.2 billion deficit.

The huge jump in foreign trade was led by much stronger external demand as major economies in Europe and the US rebounded, driving up orders for Chinese products, the report said.

China’s economy continued to expand in the beginning of the year, fueling imports. The manufacturing purchasing managers’ index has stayed above 50, indicating growth, for 12 consecutive months and the sub-indexes for production and new orders of most sectors are also above the threshold.

In addition, many factories remained open over the Chinese New Year break last month to comply with government exhortations that employees do not return to their hometowns in order to curb the spread of the novel coronavirus. As a result, orders that would normally have been delivered after the holiday were shipped early.

However, despite growing optimism among businesses, there is still reason for caution, the administration said. The pandemic continues to spread, the international situation stays uncertain and the global economy outlook looks grim.

China's imports remained undented despite a sharp rise in raw material prices, mainly due to large-scale monetary easing in the Europe and the US. The price of Brent crude oil, for instance, has gained 34 percent so far this year and reached a 14-month high on March 5 at USD69.36 a barrel.

There seems little relief in sight. The US’ Federal Reserve Chairman Jerome Powell said in February that quantitative easing will stay in place as inflation and employment remain well below the Fed’s targets. The European Central Bank will keep its easy money policy unchanged to promote recovery of the euro zone economy, President Christine Lagarde said earlier.