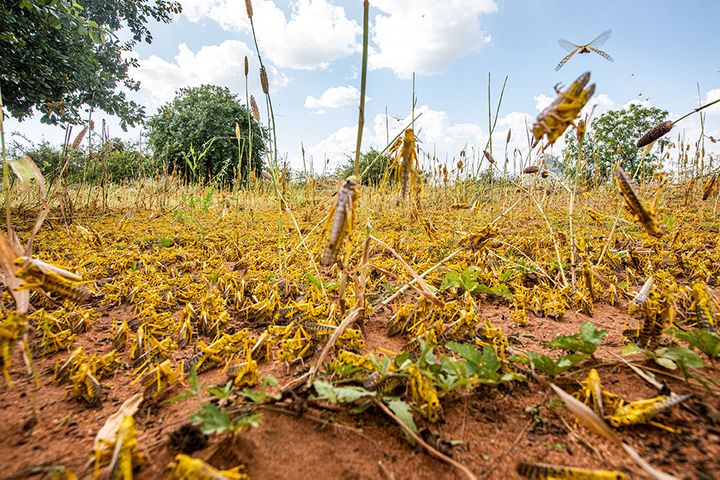 (Yicai Global) March 25 -- Desert locusts have lately rampaged in India, Pakistan and several East African countries and China is joining forces with these countries to control the swarms at source to check their migration, though experts have said the prospect of their infiltrating China is remote.

China's Ministry of Agriculture and Rural Affairs sent a disaster prevention and control group to Pakistan at the end of last month. It wrapped up its mission and returned on March 5, Yicai Global has learned. The agency originally planned to also deploy a team to the East African source of the grasshopper plague in mid-month to jointly study and devise prevention and control measures, but the swift global spread of the Covid-19 pandemic scuppered this scheme.

The insect plague has persisted since last March, and 38 percent of the 30 million hectares of land suitable for breeding of these voracious arthropods have been invaded, according to Pakistan's Ministry of National Food Security & Research. Locusts have devoured cotton, chickpeas, rapeseed, sunflower, peppers and other food crops In recent months, above all in southwestern Pakistan's Baluchistan province, Dr. Waqas Wakil, professor at the Department of Entomology at the University of Agriculture, Faisalabad, told Yicai Global. Damage surveys are still ongoing, he added.

The situation is grievous in the South Asian nation, a staffer with the International Department of its Ministry of Agriculture and Rural Affairs told Yicai Global. Most of the bugs are now mating, which, while not currently harmful to crops, will pose a huge threat in the rainy season after the resulting eggs hatch.

Though Pakistan's current locust disaster areas are mostly sparsely-populated deserts, the country lacks monitoring technology and methods and control capability, and cannot completely eliminate the infestation in the short term, but it can quickly reduce bug counts and losses with Chinese and worldwide help, the source said.

China and Pakistan have fast-tracked the setup of a joint work group and held regular meetings to talk policy, conduct technical exchanges and personnel training on sustained control measures.

The Chinese have urged Pakistan to apply pesticides for emergency control to cut losses and ecological, biological and chemical controls for the long haul, based on field investigations, Pakistan's actual circumstances and China's own experience.

The two Asian nations recognize the importance of biological pesticides to avert ecological harm. China has used these on tens of thousands of hectares in the past three years.

Dr. Wakil and his team are pioneers in Pakistani bio-pesticide research and have isolated several fungal strains that kill and sustainably control the devastating bugs without damaging the environment. Heavy pesticide use will only hurt ourselves later, hel stressed.