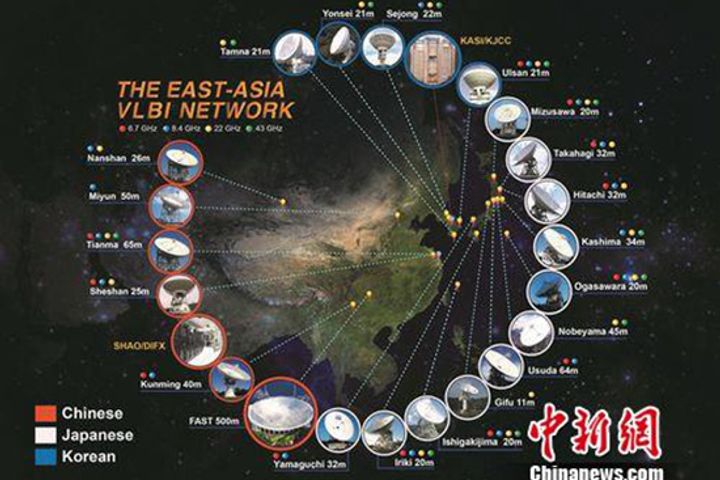 This eye on the sky offers a very high angular resolution comparable to a super telescope with an effective diameter of 5,000 kilometers.

All the three Asian countries have developed their own radio telescope facilities, and integration of these resources will result in synergies that will rocket East Asia into global leadership in radio astronomy research, An told the news agency in an interview.

The network comprises 21 radio telescopes located across vast areas of the region that stretches from China's Urumqi to the Japanese Ogasawara Islands in the southeast, from Japan's northeastern city of Mizusawa to Kunming in China's southwestern Yunnan province. Diameters of the devices range between 11 to 500 meters, with wavelengths spanning from 2.3 gigahertz to 43 GHz. Working together, they yield a remarkable resolution akin to a telescope with an effective diameter of 5,000 kilometers, enabling scientists to explore  black holes, pulsars and other compact cosmic objects farther away from Earth.

EAVN has purportedly started test observations and will soon formally activate. More telescopes, including the Fast 500 telescope undergoing testing in southwestern Guizhou province, Qitai a 100-meter telescope planned for China's northwestern Xinjiang region, another VLBI network in Thailand and a 12-meter aperture telescope in Greenland will all join EAVN in future. South Korea and Japan are also upgrading their millimeter-wave telescopes to better equip their scientists for astronomical studies.