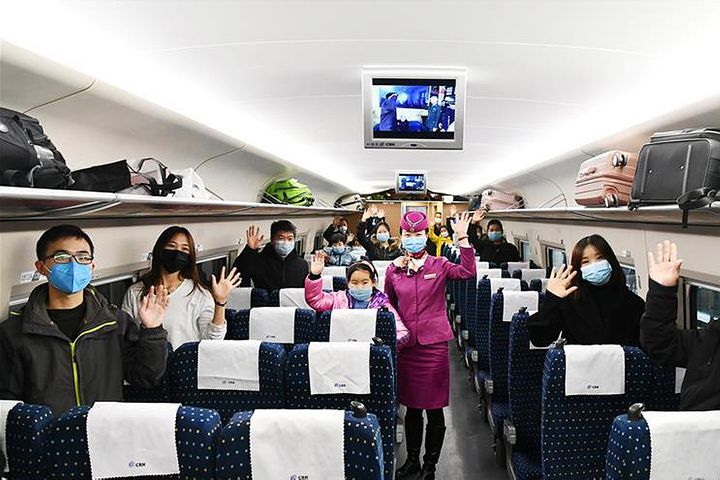 (Yicai Global) Feb. 18 -- Various local governments in China are propping up businesses' operations and resumption of production via such measures as refunding travel ticket costs, subsidizing companies which recruit workers and offering living allowances to those that return to work during the country's war against the Covid-19 epidemic.

Authorities in the cities of Jiashan, Yiwu and Hangzhou in east-central Zhejiang province have chartered buses, bullet trains and/or planes to ferry migrant workers from distant provinces such as southwestern Guizhou and Sichuan to give firms the labor they need to restart after China's extended Lunar New Year holiday, while also reducing the risk of virus transmission from worker's returning in a scattered stream.

The government of Yiwu, also in Zhejiang, will reward local firms which restart operations and hire more than five workers with a CNY500 (USD71.5) subsidy for each employee. That will rise to CNY1,000 (USD143) each if the business hires 20-plus staffers. Local authorities will gift CNY1,000 each to those hired in the city which is home to the world's largest small goods market for the first time. The nearby port of Ningbo will refund half of unemployment insurance payments to local foreign trade firms that refrain from job cuts or which shed fewer jobs.

City elders in southeastern Fuzhou will grant local businesses active in epidemic prevention and control and those producing medical and supporting raw materials CNY2,000 for each added employment spot of at least three months' duration in this time of urgent need.

Officials in the Hunan provincial capital of Changsha will give companies CNY60 for each worker back on the job before Feb. 20, with the money to be handed to to these employees, it announced.

Authorities in Nanjing, the capital of eastern Jiangsu province, will organize more than 300 online recruitment fairs for local small and medium enterprises and launch 24-hour services to match labor demand and supply on internet-based recruitment platforms.