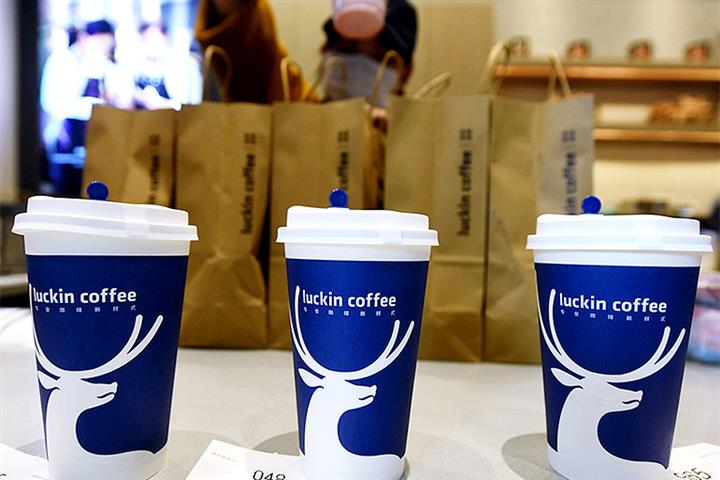 (Yicai Global) Oct. 22 -- Chinese coffee store chain Luckin Coffee, the Starbucks challenger that was fined by US regulators last December for faking sales, narrowed its first-half loss by 86 percent from a year earlier and doubled its revenue thanks to higher same-store sales, product prices, and user numbers.

The net loss was CNY211 million (USD33 million) in the six months ended June 30, while net revenue was CNY3.18 billion (USD498 million), according to the Xiamen-based firm’s latest earnings report. Last year, it ran up a CNY1.5 billion loss.

Luckin Coffee’s stock price sank 80 percent last April on the day it admitted a CNY2.1 billion financial fraud. The firm was later delisted from the Nasadq, which it had joined in May 2019, and agreed to pay a USD180 million penalty to the US Securities and Exchange Commission for the fabricated sales and overstated revenue and expenses.

“This earnings announcement is an important milestone as it enables us to return to normalized financial reporting,” Chairman and Chief Executive Guo Jinyi said in a statement.

“Today, with a refreshed board of directors and leadership team, as well as the execution of our strategy to focus on our core coffee business and deliver sustainable growth and profitability, we are well-positioned to drive meaningful long-term value for our shareholders, and continue to provide outstanding products and services to our customers,” he said.

Shares of Luckin Coffee [OTCMKTS:LKNCY], which trade on the over-the-counter market in New York, closed down almost 0.8 percent at USD15.88 yesterday.

The sales growth at its self-operated stores was 83 percent in the first six months, 62 points higher than the same period last year, Luckin said. Operating profit at these stores was CNY417.3 million with an operating profit margin of 16.3 percent, compared with a loss of CNY513.4 million and an operating loss margin of 39 percent a year earlier.

Luckin Coffee has 5,259 stores at the end of the first half, of which 4,018 were self-operated and 1,241 were partnerships. Average monthly transacting customers totaled 10.5 million, 35 percent higher than last year. The average price for a cup was CNY14.5 (USD2.27), a big leap from CNY9.9 in the fourth quarter of 2019, according to Yicai Global's calculations.

In the first quarter, sales revenue jumped 89 percent to over CNY2.7 billion from a year earlier, and revenue from partnership stores soared 358 percent to CNY441.2 million.