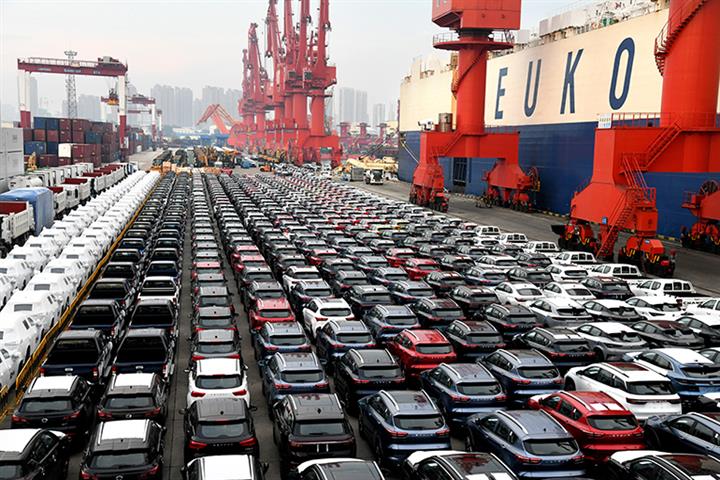 (Yicai Global) Sept.27 -- China’s new energy vehicle industry has become globally dominant over the last 10 years, and the penetration rate of NEVs in China itself has shot up from less than 1 percent to almost 30 percent.

China's total NEV sales have climbed from 20,000 units at the end of 2012 to 11.08 million at the end of May, with production and sales ranking first globally for seven consecutive years since 2015.

Policy support has helped, with China piloting a subsidy policy for NEVs in 2010. Thanks to government incentives, NEV sales doubled last month from a year earlier to 529,000, data from the China Association of Automobile Manufacturers showed, with the penetration rate jumping 11 percentage points to 28.3 percent.

Chinese NEV makers have also taken the global lead. Shenzhen-based BYD, for example, has replaced Tesla as the industry’s worldwide sales champion. In the first half of this year, BYD sold 641,000 vehicles worldwide, up more than 300 percent from the same period last year and surpassing Tesla's 564,000.

Chinese NEV startups have also led to changes in the auto market. In the era of fossil fuel-powered vehicles, foreign brands were more technologically advanced and Chinese automakers lagged behind. But the country’s NEV producers are now at the cutting edge.

“The competition between Chinese and foreign NEV brands will become more intense next year," said Ouyang Minggao, a member of the Chinese Academy of Sciences. There will be a major adjustment of leading firms in the next five to 10 years, and it is hard to predict which will come out on top, he added.

Progress on battery development is one of the main reasons for the rapid development of NEVs in China. Ningde-based Contemporary Amperex Technology has sat atop the global power battery market since 2017, and BYD's share has also been increasing. Half of the global top 10 power battery firms are from China.

Chinese power batteries have formed a complete industrial chain, with a global market share of 90 percent for anode materials and an independent supply rate for diaphragm materials at over 90 percent.