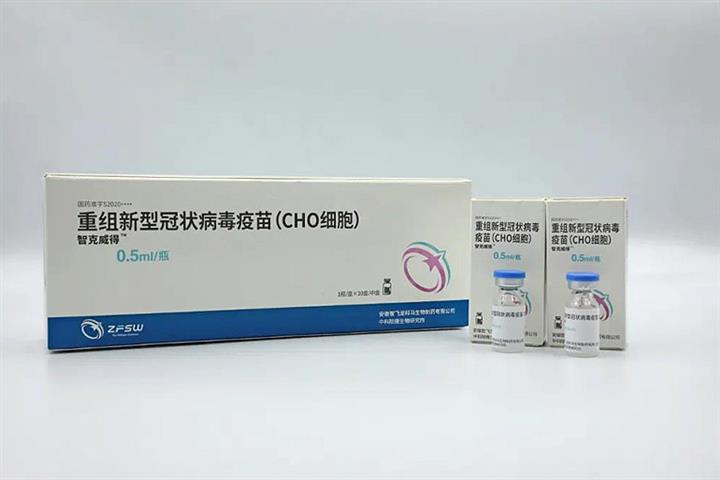 (Yicai Global) March 17 -- China has given the green light to its fifth Covid-19 inoculation which one of the developers claims is the world's first approved recombinant protein vaccine against the new coronavirus, coming with easy production and transport.

China's drug regulator granted an emergency use authorization for the product that is developed by a unit of Chongqing-based Zhifei Biological Products and the Institute of Microbiology under the Chinese Academy of Sciences, the institute announced on its website yesterday. The IM said it is a pioneering product globally.

Before this, Uzbekistan permitted the use of the vaccine on March 1. The developers began testing the product in China, Uzbekistan, Pakistan, Ecuador, and Indonesia last November and some 29,000 volunteers have participated in the trials. The program requires three doses, administered with a one-month interval, Gao Fu, an academician at the CAS, told Yicai Global.

China's medical authorities have given EUAs for four other Covid-19 jabs, including three inactivated vaccines that require two doses, and one single-shot adenovirus-based vaccine.

Phase III clinical trial data of the recombinant protein vaccine are expected to be available this summer, Yicai Global learned. In phase I, each recipient generated neutralizing antibodies and the vaccine was more than 93 percent effective based on different dose sizes.

An insider at the institute said to Yicai Global that the vaccine's annual production could reach 1 billion doses. Such work requires no high-level biosafety lab as the manufacturing techniques are stable and the product is easy to store and transport, according to the official announcement.

Recipients have reported no serious adverse reactions after their inoculations, and the product's effectiveness is at international levels, according to clinical data, the statement added.