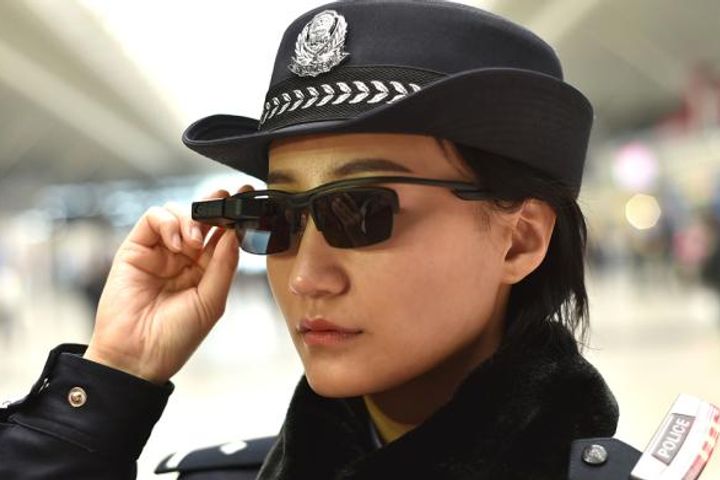 (Yicai Global) Feb. 9 -- As China's annual Spring Festival migration is now under way, Zhengzhou railway police are among the first in the country to wear glasses with a facial recognition system at four entrance gates at the city's east train station to help them capture fugitives and those traveling using other people's identities, online official media outlet the Paper reported yesterday.

A pair of such glasses capable of recognizing faces in milliseconds can help reduce stress on railway police as hundreds of millions of people will travel during the holiday period. Zhengzhou police have already caught seven fugitives allegedly involved in major criminal cases such as human trafficking and hit-and-runs and 26 individuals traveling on other people's identities.

Beijing LLVision Technology Co. developed the glasses. In testing, the spectacles were able to identify a target from among a database of 10,000 people in 100 milliseconds, though this may take a little longer in practice because of environmental interference, said  LLVision founder Wu Fei.

China's adoption of intelligent technologies in the security field in recent years has attracted worldwide attention. Under its Sky Net initiative, China has deployed 170 million surveillance cameras, the majority of which are equipped with facial recognition and real person-identity document matching systems. Late last year, a BBC reporter tested the efficiency of the Sky Net system with the help of Guiyang police. It took just seven minutes from uploading his selfie to the cloud platform to his being 'arrested' at a train station.

Compared to traditional fixed surveillance cameras, portable face-scan glasses pose a threat to privacy, which is the reason LLVision does not yet sell the product to individuals, it said.