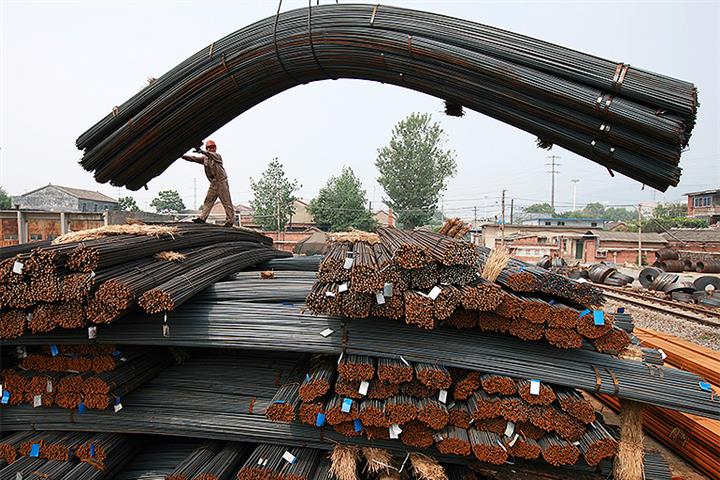 (Yicai Global) Jan. 12 -- China’s iron and steel sector saw profits leap 86.4 percent in the first eleven months last year from the same period the year before to hit a new high, despite the surging price of iron ore and fuels, according to an industry association.

Member companies of the China Iron and Steel Association reported CNY351.7 billion (USD55.2 billion) in net profit from January to November 2021, Lu Guixin, inspector at the department of raw materials of the Ministry of Industry and Information Technology, said at the association’s general assembly on Jan. 10. Revenue soared 36.2 percent to CNY6.3 trillion (USD988.4 billion).

The steel mills were able to achieve a profit margin of 5.54 percent, a gain of 1.48 percentage points from a year earlier, Lu said.

The country’s steel output last year is likely to be 1.03 billion tons, down 3 percent from 2020, said Chen Derong, chairman of the association. Supply and demand was basically balanced, he added.

The nation’s demand for iron and steel this year will be around the same as last year, said Chen. The real estate sector is facing downward pressure, but investments in infrastructure should increase significantly and the manufacturing field will continue to thrive, he added.

However, there was a drop in demand for steel in the second half last year as economic growth slowed down. This combined with the country’s drive to limit steel production to help it achieve its green goals led to a poor performance in the fourth quarter.

Profitability at medium and large-sized steel companies fell significantly in November and over 30 percent of firms returned to making a loss that month, Lu said, adding that there is still a risk of another sharp rise in iron ore prices.

“China’s economy is facing declining demand, supply is being affected and there are weaker expectations, all of which greatly increase the downward pressure on the steel industry,” Lu said.