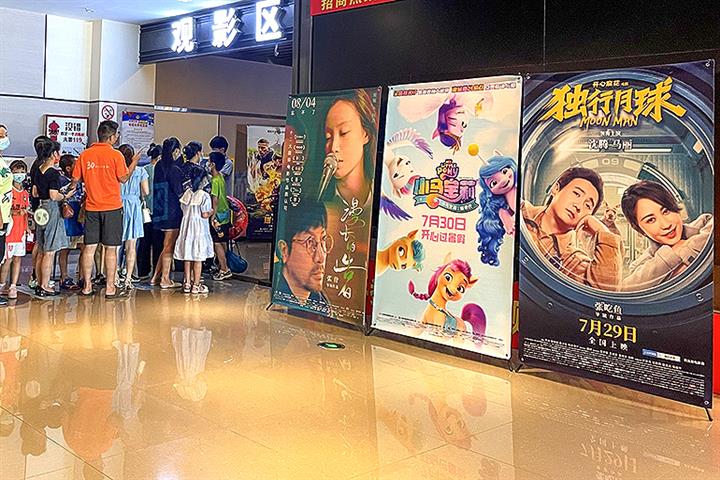 (Yicai Global) Sept. 1 -- China's box office receipts surged by 23 percent in the three summer months of June to August from a year ago due to policy support and two new domestic releases.

Movie ticket sales exceeded CNY9.1 billion (USD1.3 billion) during the three months, reversing the downturn caused by Covid-19 outbreaks in the first half, according to cinema data platform Beacon.

The recovery marks a very positive signal for China’s film market as the demand has started to pick up after nearly three years since the Covid-19 pandemic began, said Sun Jiashan, deputy researcher at the Chinese National Academy of Arts. This is a very positive milestone for the entire sector, Sun added.

Moviegoers who had not been going to cinemas for long returned to watch Moon Man and Lighting Up The Stars, said Chen Jin, data analyst at Beacon.

Cinemas have reopened across China as the Covid-19 pandemic is increasingly under control. Some nine cities earned more than CNY200 million (USD29 million) in box office each, or five more cities than a year ago, Chen said.

The performance of Guangzhou, the capital of southern Guangdong province, and central China's Wuhan improved as Covid-19 outbreaks were effectively under control and local cinemas released appealing movies, the analyst added.

But the first half was still weak. From January to June, China’s box office receipts amounted to CNY17.2 billion (USD2.5 billion), down by 38 percent from a year ago, according to Beacon.

The government is seeking to boost residents' entertainment consumption by issuing discount vouchers. The China Film Administration said on Aug. 11 that it will join hands with ticketing platforms to grant coupons worth CNY100 million (USD14.5 million) till October.