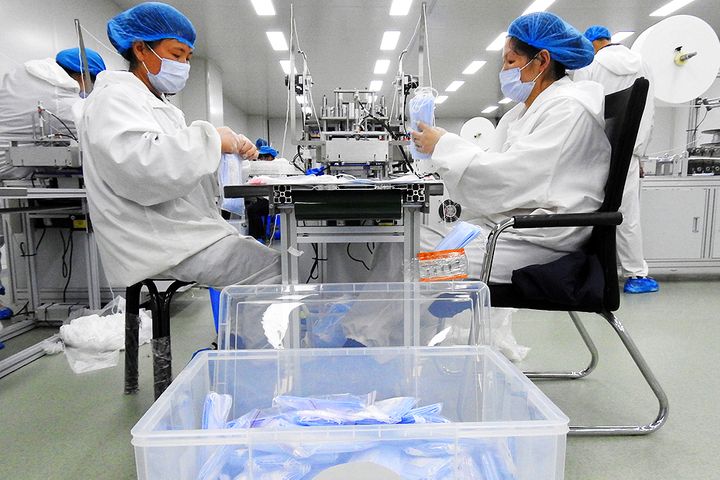 China Tells Medical Suppliers to Get Domestic Licenses Before Exporting

(Yicai Global) April 1 -- As the Covid-19 outbreak spreads rapidly around the world, China is exporting a large amount of medical supplies to support the global fight. To ensure quality and safety, Chinese regulators issued a notice yesterday, requiring suppliers to first have a domestic license before shipping items overseas.

From today, companies that export reagents for Covid-19 tests, medical masks, protective clothes, ventilators and infrared thermometers must provide documents in written or electronic form, promising that their exports have secured registration certificates for medical devices, and meet the quality standards or requirements of the destination nations when applying to customs, according to a statement jointly released by the Ministry of Commerce, the General Administration of Customs and the China Food and Drug Administration.

Under previous regulations, exports only had to meet the quality criteria of the destination markets, instead of those in their places of origin, Li Hong, founder of medical information service platform MediCafe, told the National Business Daily.

Both CE marking and the US Food and Drug Administration have issued emergency access policies in response to the pandemic, which has led to a large number of merchants taking advantage of policy loopholes to get their devices exported without complying with related regulations, Li said.

A number of countries have recently raised concerns about the quality of anti-epidemic materials imported from China. Spanish media reported that a batch of Covid-19 rapid detection kits bought from China were less accurate than standard ones. Their producer Shenzhen Bioeasy Biotechnology responded in a statement, saying that the products had obtained CE certificates from the European Union on March 12, but had not received registration licenses in China.

According to Foreign Ministry spokeswoman Hua Chunying, the Chinese government has provided medical supplies to 120 countries and four international organizations, and has also recommended qualified exporters to countries that have requested commercial procurement assistance.

But no overseas buyer has so far reported any quality issues regarding items they purchased through official channels, she told a press briefing in Beijing yesterday.