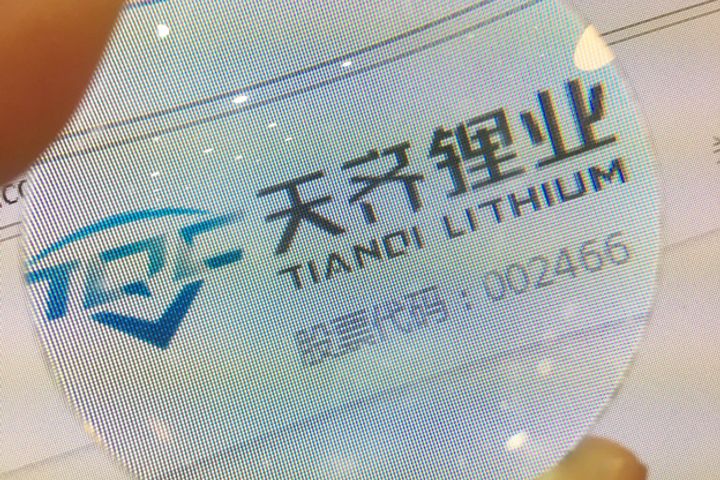 (Yicai Global) May 18 -- Tianqi Lithium Corp. will invest billions of dollars to become the second-largest shareholder in one of the world's biggest lithium suppliers, Sociedad Química y Minera de Chile SA, or SQM. The move is expected to consolidate the Chinese company's strong position in lithium concentrate and lithium chemical production and sales, it said.

According to the agreement, the deal is priced at USD65 per share, and Chengdu-based Tianqi will obtain 62,556,568 class-A shares in the target company for about USD4 billion, accounting for nearly 24 percent of the total capitalization, per the statement.

SQM [NYSE:SQM] shares closed at USD54.96 per share yesterday. Based on this price, Tianqi's offer of USD65 per share is regarded as a high premium the company is prepared to pay for its target assets.

As of the end of last year, Nutrien and its wholly-owned affiliates were the largest single shareholder of the target company with a combined direct shareholding of 32 percent. China's ministry of commerce and India's competition commission required Nutrien, formed by the merger of Agrium Inc. and Potash Corp of Saskatchewan Inc., to sell its stake in SQM to provide clearance for merger.

After the share transfer, Sociedad de Inversiones Pampa Calichera SA and its affiliates will replace them as the number one shareholder with a combined holding of almost 30 percent, and Tianqi will become the second largest single shareholder.

SQM owns lithium resources in Chile's Salar de Atacama, the largest salt flat in North Chile, and it has the highest lithium concentration, largest lithium reserves and the most favorable mining conditions in the world, the statement said.

SQM's core products are agricultural chemical fertilizers, lithium chemical products, iodine and other chemicals, it mentioned. Driven by fast-growing demand for new energy vehicles, the proportion of gross profits generated by SQM's sales of lithium products to the total increased to over 50 percent in the past couple of years, making lithium the most important growth driver for the company.

SQM is listed on stock exchanges in both the United States and Chile, and its shareholder Nutrien is currently traded in the US and Canada, per the statement, meaning that the deal is subject to approvals of multiple national regulators as well as antitrust authorities in China and India.