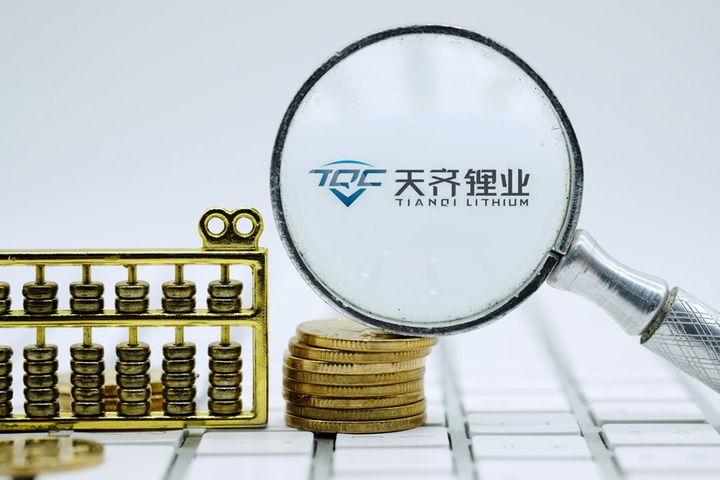 (Yicai Global) Feb. 3 -- Tianqi Lithium's lithium battery raw material project in Australia, in which the firm has invested AUD770 million (USD515 million), has slowed to a crawl since the firm's dearth of overseas engineering experience has resulted in a failure to achieve steady production, it said in a statement yesterday that sent its shares plummeting to hit rock bottom today.

This news, coupled with the risk aversion aroused by the novel coronavirus pneumonia epidemic that broke out during the country's Spring Festival holiday travel peak, precipitated a plunge in Tianqi's share price [SHE: 002466], which hit the daily 10 percent limit down to stop trading under bourse rules at CNY 27.74 (USD4) this morning.

The frustration of the trial production progress will have a certain adverse impact on the firm's future performance, and may expose the firm to litigation from construction contractors, domestic and overseas financial institutions, partners, and customers who have signed supply contracts, Tianqi said in its statement, which did not elaborate the reasons for the project's unsatisfactory progress, merely noting the company had "inadequate system design and forward thinking during the initial investment and financing operations," and still "seriously lacks overseas engineering management experience and a team of professionals."

Chengdu-based Tianqi broke ground at the Greenbushes lithium hydroxide mine project in Kwinana, Western Australia in October 2016, and began trial production at the end of 2018. It is the first large-scale overseas lithium hydroxide automated plant the company has independently designed and built. It was originally scheduled to achieve steady output by the end of last year and then ramp up its capacity.

The statement also omitted any mention of the project's new capacity targets and specific schedules for trial production and commissioning. The sprawling facility with an annual capacity of 24,000 tons of lithium hydroxide and an estimated total investment of AUD398 million was expected to be completed in October 2018, the company announced in September 2016, but said again in October last year that the company's board had agreed to raise its investment to AUD770 million after outlays had far outstripped initial projections.

Adding to its woes, it reported its first net loss in five and a half years amid lithium prices that fell by almost one-third in the third quarter, posting CNY54 million (USD7.62 million), as against CNY380 million in net profit the year before and CNY82 million in the second quarter, Glacier Media Group reported on its online mining industry news portal in October.