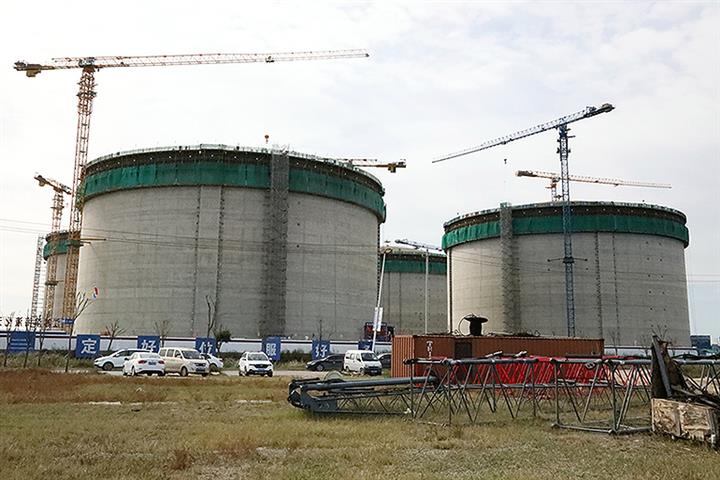 (Yicai Global) June 10 -- China National Offshore Oil Corp., one of the country’s biggest oil and gas producers, is building six giant liquified natural gas storage tanks, proving that China has become one of the few countries in the world that can design and build such large tanks, The Paper reported.

The six tanks, each with a volume of 270,000 cubic meters, will be installed in Yancheng, eastern Jiangsu province. It is part of a CNY6.1 billion (USD955.5 million) project that, together with four smaller storage tanks that have already been commissioned, will have a storage capacity of six million tons of LNG a year. Scheduled to start operation in late 2023, it will be the nation’s largest LNG storage base.

Six million tons of LNG is equivalent to around 8.5 billion cbm of natural gas in its gaseous state, enough to supply Jiangsu province’s 84.7 million residents with gas for 28 months and ensuring a stable supply of clean natural gas to one of the country’s most economically developed areas, the Yangtze River Delta, and even the whole of eastern China.

LNG needs to be stored at very low temperatures of around minus 162 degrees Celcius. The ability to build such large tanks makes China a world leader in this technology, said Yu Hu, general manager of CNOOC Gas and Power Group Jiangsu Natural Gas.