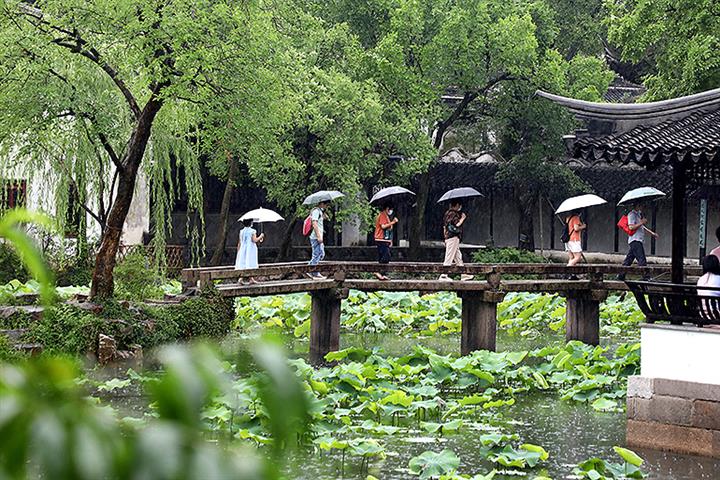 (Yicai Global) June 6 -- China’s tourism sector began to pick up during the three-day Dragon Boat Festival holiday, as some provinces and cities, including Shanghai, are once again permitting travel between regions.

Orders placed with online travel agencies such as Trip.Com, China’s biggest, soared more than 30 percent during the Dragon Boat Festival from June 3 to yesterday compared with the Tomb Sweeping Festival holiday between April 3 and April 5, according to data released by travel agencies yesterday.

More Chinese provinces and cities have resumed inter-provincial travel after the country adjusted its Covid-19 restrictions. During the Dragon Boat Festival holiday, trips across different provinces accounted for nearly 80 percent of all group tours, a three-month high, according to Trip.Com. The figure was up more than 20 percent from the Tomb Sweeping Festival and nearly 10 percent from the May Day holiday.

The Dragon Boat Festival may be an important turning point for domestic tourism this year, with Covid-19 under control and the sector in a steady recovery, said Zhang Zhining, deputy director of the strategic research center of Trip.Com’s Research Institute. The desire to travel and spend in the Yangtze River Delta and Beijing-Tianjin-Hebei regions may show their potential in the summer season, he added.

Five cities in the Yangtze River Delta region were among the 10 with the fastest-growing thirst for travel during the Dragon Boat Festival. Suzhou topped the ranking, followed by Shanghai, Nanjing, Wuxi, and Yangzhou.

China’s top six tourist attractions were also the most popular destinations by plane over the holiday period. The three busiest routes were to Chengdu in southwestern Sichuan province, Trip.Com’s air ticketing data showed.

Homestay and camping gained popularity during this year’s Dragon Boat Festival, with related online searches jumping 24 percent and 54 percent, respectively, from a month earlier, according to figures from Tongcheng Travel.

With Shanghai beginning its return to normal life from June 1, the three-day Dragon Boat Festival was essential for a recovery in the city’s tourism sector. More than 40 scenic spots had reopened in the city as of June 3, with more than 40,000 tickets sold. That means about 28 tickets were sold every minute.