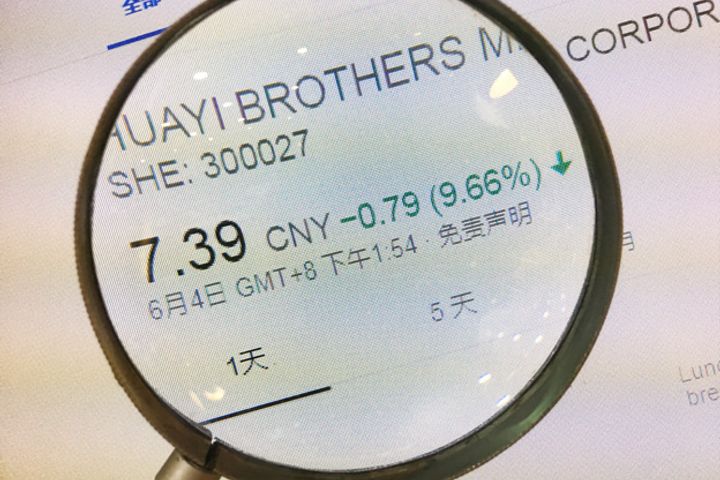 (Yicai Global) June 4 -- The media stocks in China's A-share market have suffered a serious setback today following allegations of possible tax evasion by the country's superstar, Fan Bingbing, known by international audiences from her appearance in one of the X-men movies.

The shares of television and movie studios slumped despite Fan denied allegations raised by a former host at state broadcaster CCTV, who said that Fan failed to pay more than CNY23 million (USD3.6 million) in tax by using a fraudulent dual contract system, known as 'yin yang contracts,' which if proved correct could send the star to jail.

The shares of television and movie production companies bore the brunt of the news today. Fan's own studio, Zhejiang Talent Television and Firm, plummeted 10 percent, the daily trading limit. Huayi Brothers Media [SHE:300027], one of the country's biggest studios, and TV and movie producer Wuhan DDMS Culture [SHA:600136], also fell by the daily limit.

Cui Yongyuan opened the Pandora's box on his microblogging Weibo account last week, saying that Fan had signed a CNY10 million (USD1.56 million) contract for a four-day movie shooting to avoid paying higher tax, while another secret version of the contract added CNY50 million to her remuneration. Her production company yesterday denied that either she or it had ever inked such contracts.

The State Administration of Taxation ordered local tax bureaus to move on actors' dual contracts and vowed to take tougher action against tax cheats, CCTV reported. Officials from Wuxi Local Taxation Bureau, located in the same Jiangsu province where Fan's studio is based, began looking into her case yesterday, SAT said in a statement.

The investigation into actors' dual contracts is far beyond the scope of the entertainment sector. Following the fast-unfolding events today, A-share's all media stocks face risk. Hengdian Entertainment [SHA:603103] was down 4.8 percent, Beijing Enlight Media [SHE:300251] was down nearly 6 percent, and Guangzhou Jinyi Media [SHE:002905] fell by 4.3 percent, all of whom seeing sharp drops in stock value.

All of a sudden, a megastars' sky-high remuneration and tax evasion allegations have become a hot topic among the world's largest number of internet users.

Fan has frequently made it into the Forbes China Celebrity list starting from 2004 and topped it for the fifth straight year with annual earnings of CNY300 million last year. Fan came to attention in 1998 through a Chinese TV costume drama called My Fair Princess. She has starred in many Chinese and overseas movies since, including X-Men: Days of Future Past and Iron Man 3.

The 36-year-old Fan is one of the world's highest-paid actresses and models and is considered a fashion icon. Forbes listed her as the world's fifth-highest paid actress in 2016, with income of USD17 million. But while she gets paid more than Tom Cruise, all of the highest paid stars in China are men.

Since April 2013, Fan has been the legal person of five companies, including Wuxi Aimeishen Movie & Culture and Wuxi Talent Culture Media.

In Mar 2016, Zhejiang Talent Television also announced that it intends to acquire 51 percent of Wuxi Aimeishen's stock with a valuation exceeding CNY700 million, while Aimeishen's registered capital is only CNY3 million.

In its statement, Zhejiang Talent said that it values "Fan Bingbing's IP scarcity and the value she holds for the future." However, Zhejiang Talent Television & Film decided to terminate the planning of this major asset restructuring because of tightened regulations over the mergers and acquisitions in the film and television industry, following of which its stock price fell by the daily trading limit.