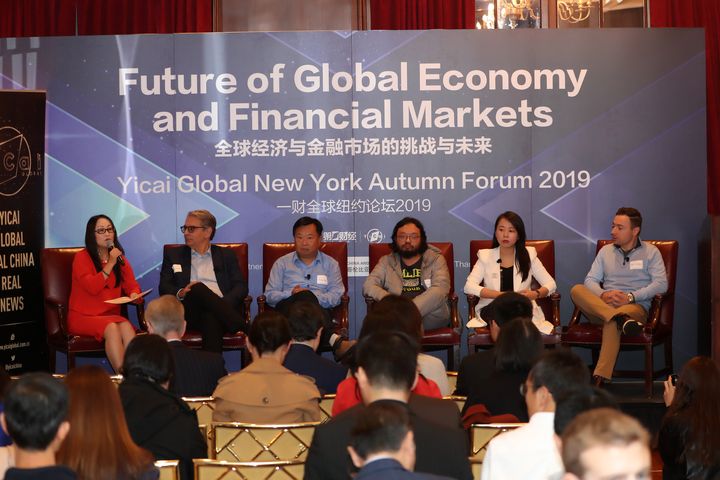 (Yicai Global) Oct. 26 -- Leading economists and financial sector executives from China and the US found consensus at Yicai Global's New York Autumn Forum, agreeing that there are no winners from the ongoing global trade frictions and that a settlement needs to be found to maintain stability and growth of global economy.

The Future of Global Economy and Financial Markets symposium was hosted by the English-language arm of leading Chinese news outlet Yicai Media Group on Oct. 22. It focused on topics such as the global economy, financial markets, responses to policy and digital currencies.

China is transitioning from being a global manufacturing powerhouse to a more consumption-oriented and technology-driven economy, Yang Yanqing, deputy editor-in-chief of Yicai Media and managing director of the Yicai Research Institute, said in her welcoming speech. She said that low growth, low inflation, low trade volumes, high financial volatility and inequality in the global economy will last quite a while, which will be a challenge for policy makers around the world.

The whole world needs to work together in order to survive, James Bacchus, distinguished professor of global affairs, director of the Center for Global Economic and Environmental Opportunity at the University of Central Florida and former chairman of the Appellate Body of the World Trade Organization, said in his keynote speech.

Unless China and the United States unite, no one will be the winner of this trade friction, and the global economy will suffer, he added.

Zhu Min, dean of the National Research Institute of Finance at Beijing's Tsinghua University and former deputy managing director of the International Monetary Fund, said the increase in labor productivity in China's emergence as a high-income economy is important to the service industry, and the increase in labor rates comes from marketization and openness.

He pointed out that a broader use of artificial intelligence and fifth-generation technologies will make China a more open and digitalized economy in the future.

The latest IMF report shows that trade friction will cause global economic growth to fall by nearly 1 percentage point. Lately the risk parameters have increased and have been reflected in the recent economic downturn and drop in global gross domestic product, the speakers said.

The effects of the trade friction will take years to play out, Gapen said, adding there is a 25 percent to 33 percent chance that the US will fall into recession next year.

It is important for the world's two largest economies to form a deal because their trade frictions are affecting the global economy, the speakers said.

A fireside chat chaired by Yang during the forum focused on digital currencies and their impact on the global monetary and financial system. She was joined by Lawrence Rufrano, executive director of the Advanced Financial Technologies Laboratory at Stanford University, Han Feng, co-founder of Elastos, Zhang Lu, founder of Fusion Fund, Michael Yeung, founder and CEO of BlockContinent and Alex Shapiro, chief strategy officer of Prometheum.

Rufrano said interoperability is a key issue for the central banks right now. The US Federal Reserve will team up with someone like Libra because they don't have the technology, he added. This also echoes the direction of development suggested by some senators in the recent Zuckerberg hearing.

The speakers agreed that earlier cryptocurrencies were decentralized and anonymous, but if they are to enter the economic and financial mainstream, they must be placed under regulation to ensure compliance with anti-money laundering, counter-terrorism financing, foreign exchange management, consumer and investor protection, and other regulations.

At the same time, for large technology companies like Facebook, due to their poor reputation in the field of data privacy protection, more efforts are needed, they added.

Speakers also had a heated discussion on other issues related to the development of digital currency, such as efficiency, scalability and security.