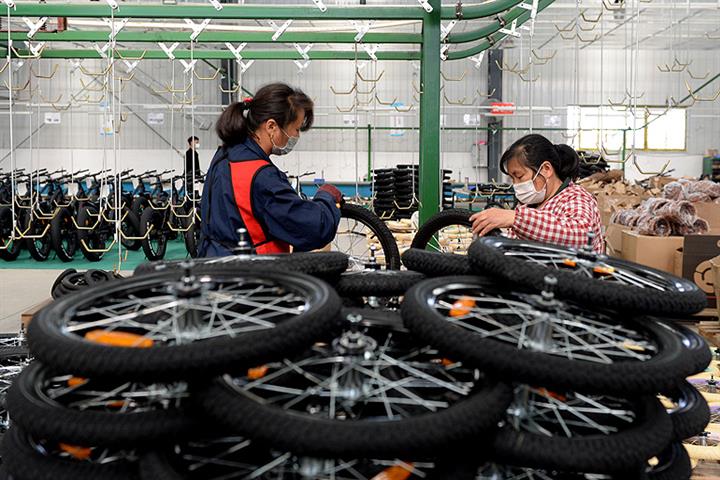 (Yicai Global) June 11 -- A recent uptick in China's bicycle export demand, caused by the Covid-19 pandemic, has resulted in a backlog of orders amid rising costs of labor and bike parts.

In the past two months, sales have surpassed that of the entire year of last year, Wu Yaping at Yiwu-based exporter Longda told Yicai Global. Wholesale prices have risen nearly 10 percent in the past month due to the rising value of parts, the long-term bicycle retailer added.

Bike manufacturing requires a longer supply chain process than personal protective equipment so the sudden spike in demand, spurred by the pandemic, cannot be fulfilled so easily, Yicai Global learned from industry insiders.

In March, Dynavolt Intelligent Vehicle Technology's page views on a global e-commerce platform doubled from a month earlier because many people overseas were preparing to go out again while avoiding public transport, said General Manager Zeng Xiansheng. But the Suzhou-based e-bike maker's shipments were still blocked due to the epidemic.

In May, overseas offline stores started reopening so Dynavolt's export volumes exploded. For the second quarter, it expects to see sales rise more than twofold from a quarter earlier. Before this, the company's exports to Europe and the US had been growing steadily at a 25 percent rate in recent years.

Alibaba Group Holding's cross-border platform AliExpress provides some numerical evidence. In May, bicycle sales increased by more than 22 times in Spain from a year ago, while in the UK and Italy, sales rose by about four times. Meanwhile, clients in Russia bought 60 times as many bikes as during the same month of last year.

One Yiwu-based mountain bike retailer said that although the demand has soared overseas, he has stopped accepting more orders, worried about not being able to deliver. After a client places an order, it takes at least three months until the trading company receives the product, said Fu Qiang at the company.

Expanding from bicycles to more expensive electric bikes is not the obvious next step for all, according to Dynavolt's Zeng. Making a quick profit by producing e-bikes is not easy, he said, adding that the manufacturing process is complex and requires more space and equipment. Moreover, e-bike exporters need to secure licenses to sell abroad.

One threat to the two-wheeler boom is potential US tariff hikes. If that happens, Dynavolt would set up assembly plants overseas to mitigate such adverse impacts, according to the GM.