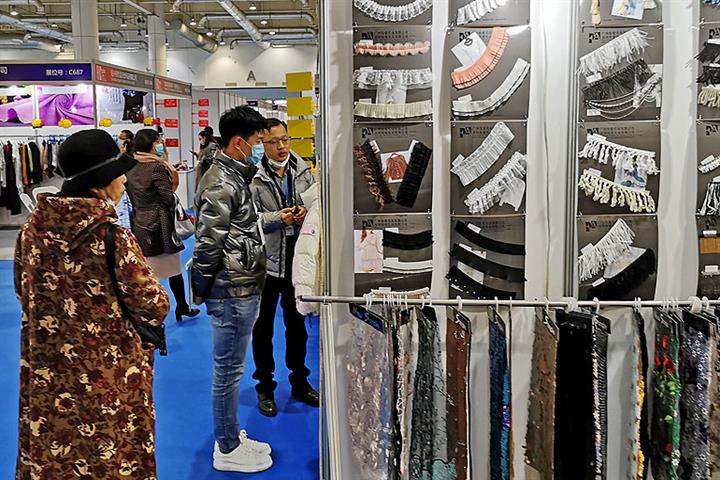 (Yicai Global) Jan. 8 -- Chinese one-stop garment accessory supply-chain platform Fuliaoyi today announced the close of its B and B-plus financing rounds, which brought it hundreds of millions of yuan (tens of millions of dollars).

Formed in 2016, Fuliaoyi now collaborates with over 10,000 clients and more than 1,000 suppliers. It also boasts several million bits of high-precision industry data, with its business performance multiplying a yearly three- to five-fold on average.

Fuliaoyi is one of the few cross-genre one-stop platforms in clothing supply chains in the current market, and the platform’s teams work well in building digitized, visualized products and client-service capabilities,” noted Herry Han, founding partner of Lightspeed China Partners. “Fuliaoyi has helped build flexible supply chains in the garment sector via a smart, digitized platform, and based on its profound knowledge of the accessory industry, to ease the growth of China’s ‘fast-fashion’ brands,” he added.

Fuliaoyi will focus on building up a service system whose entire processes are visible to enhance the efficiency of both matchups and production on the supply and demand sides, as well as focusing on smart and ecological construction of flexible garment supply chains after the completion of this round, said Jiang Zhengyan, Fuliaoyi’s founder and chief executive. The platform will also finish the smart upgrade of its systems, expand its market and supplement its talent, Jiang added.

Garment accessory orders feature diverse styles, large batches, fewer items per batch and quick delivery. Clothing brands’ demand targeting supply chains will evolve from its traditional mode to one characterized by provision of more new products, shorter delivery cycles and the capacity to support small volumes of customized clothes. These dynamic changes will also enable flexible supply chains to become the segments with the greatest value within the apparel sector.

Fuliaoyi started to build its digitized platform by first creating several industry standards to synchronize both upstream and downstream chains to achieve smart matchups. It also realized on-time inquiries and transparency in the procedures from placing orders and procurement to shipment and logistics tracking to accelerate precision deliveries.