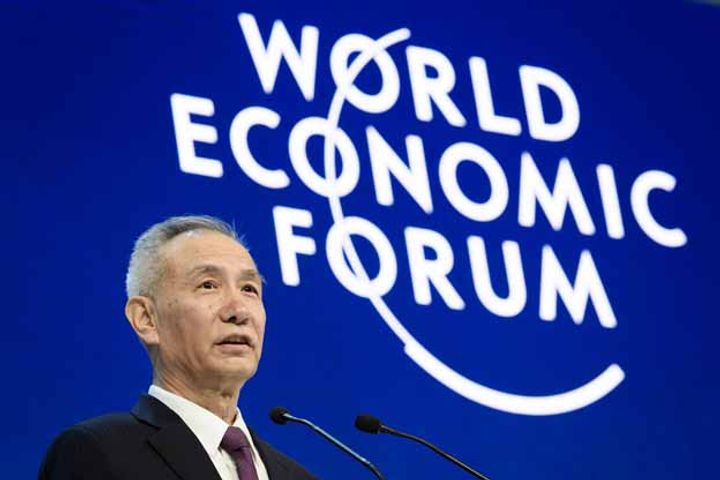 (Yicai Global) Jan. 25 -- China will hold the first international imports exposition later this year, and two high-level government officials emphasized the importance of the event during recent global conferences, indicating that the Chinese government is taking the matter very seriously.

Liu He, China's top economic policy maker mentioned that Shanghai would host the import expo this year during his keynote speech at the World Economic Forum in Davos.

"Thus far more than 120 countries have expressed their willingness to attend the fair," said Liu, a member of the Political Bureau of the Communist Party of China Central Committee and director of the General Office of the Central Leading Group for Financial and Economic Affairs. "We want to take the opportunity to expand imports, achieve trade current-account balance, and offer opportunities to more countries."

Foreign Minister Wang Yi spoke about the expo as one of the main topics in his address at the China-Latin America Economic and Trade Cooperation Forum in Santiago in Chile.

"The Chinese government has decided to hold the international imports expo on an annual basis beginning this year," Wang said. "We're willing to open up the market and share opportunities in the Chinese market with other countries."

"The Chilean government expressly stated that it would attend the expo," said Wang. "I believe that large quantities of high-quality Chilean products such as fresh fruits and wines will enter China in the near future. Chile is currently the largest exporter of fruits and the number two wine exporter to China."

Wang and Liu made their remarks less than 24 hours apart.

"China will hold China International Imports Expo from 2018 onward," Chinese President Xi Jinping said at the Belt and Road Summit last May. "We'll host the first China International Imports Expo in Shanghai in November 2018," he said about six months later at the Asia-Pacific Economic Cooperation Business Leaders' Summit. "The fair will provide a new platform for cooperation between interested parties to develop the Chinese market."

The president mentioned the same matter on two occasions in the same year, meaning that the import fair is very important for China.

"It represents a major decision made by the central government to take economic opening to a new level, and a major step toward making China an open market for the world," said Minister of Commerce Zhong Shan. "By successfully organizing the expo, we'll contribute significantly to global development and effectively address our own need for the creation of a modern economic system following the 'New Development' principles."

China is preparing for the expo, and the initiative has attracted attention from countries across the world. Some 60 nations including the UK, Russia and Italy have confirmed their intention to attend the event as national exhibitors, and companies from more than 100 countries plan to participate as corporate exhibitors.

During his recent visit to Beijing, French President Emmanuel Macron pledged support for the imports fair, and France will send a high-level government delegation and a large business delegation to the gathering.

China held a roadshow for the event in Paris on Jan. 22. Some 200 French politicians and business leaders attended, and some of them had to stand on the sidelines during presentations due to overbooking.

The exposition has also become a buzzword among businessmen in Cairo. Egyptian Trade and Industry Minister Tariq Qabeel said that his country would bring its best products to the fair.

Many countries are keen to take part in this unprecedented international event because it will let them benefit from China's fast-growing economy and help them boost exports, develop businesses and spawn new jobs.

The world economy is struggling under the shadow of trade protectionism, and support for the anti-globalization movement has reached unprecedented levels in some developed economies.

The world's second largest economy has been persevering with its commitment to reducing trade barriers. The import fair, as a new trade and dialog platform, has consequently attracted attention from governments and businesses all around the globe. Its far-reaching implications for the international community are self-evident.

The theme of this year's World Economic Forum, Creating a Shared Future in a Fractured World, fits with Xi's aim to build 'a community of a shared future for mankind,' which he spoke about last year in Davos, and shows that the 'consultation, collaboration and sharing' global governance model China advocates is gaining traction internationally.

Many people today are interested in and preoccupied by material gains, but the 'Commonwealth of Great Unity' philosophy is poised to prevail.

"China will open its doors wider and wider," Xi said. China has honored its commitments by organizing the international imports fair, introducing free-trade ports and cutting taxes. The Taoist 'commonwealth of unity' reflects the will of the people.

The World Economic Forum sparked flames of passion in Davos despite the wintery weather. Ten months later, Shanghai's Hongqiao will hold another international event to inject fresh momentum into the recovering global economy.