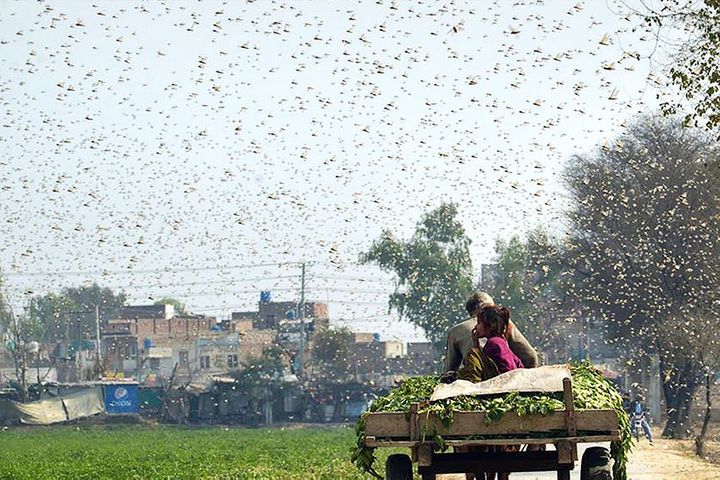 (Yicai Global) March 6 -- As China battles the coronavirus, the southwestern province of Yunnan is on high alert for another infestation. Yunnan is monitoring its lengthy border to help prevent and control an invasion of desert locusts that could strike another blow at farmers just months after deadly African swine fever ravaged hog herds.

Yunnan, which borders Myanmar, Laos and Vietnam, will set up a network of 120 bases to monitor the locust swarm's advance, the provincial government said today. The highly destructive migratory pests have already arrived in neighboring Pakistan and Afghanistan from East Africa.

Last month, the United Nations' Food and Agriculture Organization raised a global alert over the "extremely alarming" infestation which has devastated great swaths of farmland in the Horn of Africa, threatening food supplies for millions of people.

The plague could potentially enter China through Yunnan from Myanmar and via the Tibet Autonomous Region from Pakistan and India depending on climate conditions, China's State Forestry and Grassland Administration said in a statement on March 2. It could even reach Xinjiang Uygur Autonomous Region by way of Kazakhstan, the agency added.

China's pig farmers are still recovering from an African swine fever epidemic. The country reported its first case in August 2018 in the northeastern province of Liaoning before it spread nationwide. Some estimates put the death toll of China's more than 400,000 pigs at half. Pork prices soared in the contagion's wake. Fewer cases have been reported so far this year compared with the same period of 2019, the agricultural ministry said yesterday.

Yunnan's 25 border towns and two cities neighboring Tibet have been requested to take part in the surveillance network, step up communication with each other and share information on the progress of the plague, the provincial government added.

Local forestry groups have also been asked to source experts who can participate in the prevention and control of desert locusts, to prepare pesticides that are not too harmful, organize drones and also to get together the pesticides, equipment and funds necessary to defeat such a plague.